When technology goes against my way: an existential crisis 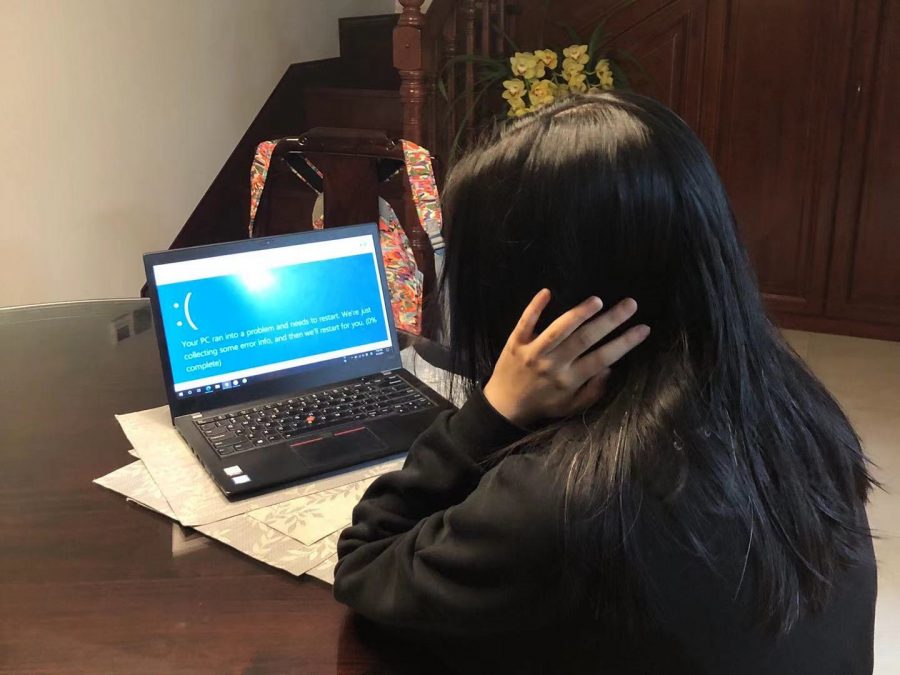 When the words, beginning with “your PC ran into a problem” appear on the screen, I know that it is yet another struggle with technology.

“Miss, please turn off your computer and close your tray table. The plane is taking off in five minutes.” I looked up at the flight attendant’s smile, gave a sad last look at the document that I was working on, and shut the computer reluctantly. “Please check before shutting down your computer—there are programs that are still running.” Ignore; shut down; yes, I am sure.

Without even bothering to read the same old directions on my recently damaged, yet still-functioning computer that fell off the table, I knew that my beloved computer, my most intimate friend and what controls all my secrets and fantasies, was, as usual, going through the typical security checks before giving itself a rest. Why aren’t computers like humans—flexible and reasonable?

Another forced shut-down; another rush to a new destination. When I used the same muscle on the same finger to deliver my message to my non-intellectual computer, I was caught up by an intense feeling of familiarity — the familiarity of not only muscle memory but also of my restless nerves and always-rushing state.

I recalled when I had grown used to clicking the same buttons on the screen— maybe after I am finally able to finish three hours of Zoom classes; maybe when my parents would ask me to go outside to pick up a package. I would just slam the computer shut, leave it in a forgotten corner in the house, all while pulling my mind back from wherever it roamed. The classic turning-off-the-computer gesture—without care, tender, or grace—and yes, I did it again on the plane, but this time I was not very lucky.

As soon as the plane reached the sky, I opened my computer mechanically, pressing the start button a couple of times to make sure that the machine copies my order. This time, however, I faced an unfamiliar screen with daunting characters. “This computer is under auto-repair. Please try to restart.” Without attempting to comprehend the hidden language behind the lines, I restarted my computer, thinking that it was another hideous update of the Windows system.

But I do not recall choosing the “close and update” option… Very strange, but understandable since my computer always acts like a whimsical child. When I restarted the computer with the hope that everything would go back to normal, the same page popped up again: “under repair.” After repeating the process for about five times, I panicked; it was serious this time—my computer refused to turn on.

What is happening to my computer? Did I save the Word document? What if I lose all my precious folders and documents? What if the system breaks down and everything disappears—my desktop; my files; my writings; my memories; my Cortana—panic, anger, sadness; the guilty computer unscrewed the valve of my hysteria, and over the three-hour flight, I pressed restart for at least twenty times, acting more in need of “repair” than my virus-infected machine.

I was obsessed. I was not sure what exactly led to my paranoia, but I knew that something was wrong with not only my computer but also with my mind—the way that I would rush downstairs to check my email first thing in the morning; the change in heartbeat when I hear email and message notifications; and now, being unable to take a nap or simply enjoy the flight without using my computer.

There I stood, in one of my favorite cities, carrying my backpack and luggage, and looking for Lenovo stores as soon as I stepped off the plane. Walking on the familiar streets that brought back childhood memories, I limited my visions to computer stores, ignoring the beautiful mountains and flowing rivers that run through the city and my veins. In my birth city, a city of natural beauty that I had long claimed to miss, I was lost in the overwhelming world of technology, a world that had outpaced myself and will perhaps one day leave all of us behind.

I was blind to it all, to a colorful world of the yellow of flourishing winter jasmine, the green of the trees, and the blue of the clear sky; and instead, I saw a black-and-white world with only the inventions of an industrialized society: the shops and stores designed for people like me, slaves of technology.

After walking for twenty minutes and finally arriving at the Lenovo shop, I lost my last hope. It was closed because of Lunar New Year, meaning that my computer was incurable. Maybe I deserved it, not taking care of it properly. Yet, as I looked at the class of the empty Lenovo shop, I saw in the mirror a shadow controlled by technology, one haunted by new information created and carried by artificial intelligence.

Computer illiterate (as my brother would ridicule me) in a world that desperately needs technology for the earth to revolve, I also became an individual who was dependent on the screen and keyboard for the feeling of security, reassurance, and for survival in schools and in intellectual communities.

Therefore, I gave myself a challenge. I decided to leave my broken computer behind as I travelled to an isolated village near my birth city to take a break from my busy and tech-dominated life. I refused to let the myriad information, notifications, and disruptions inundate my peaceful life that could have been. I stopped checking my emails in the morning, and instead opted for walks around the tranquil terraces. I did not even check my phone often, as I indulged in a world long lost in my life—a soul-absorbing sphere of nature that was an ancient memory for a city-dweller like myself.

Skyscrapers and buildings and towers took the place of the beautiful lakes and sunsets in the modernized city; checking emails and waiting for notifications took away the pleasure of simply taking it slow and enjoying a hot cup of tea before logging into Zoom meetings every day. In the village, I found peace, and I did not worry about my recently damaged computer, which later bothered me for days.

I knew I was never tech-savvy, but now I feel that it is perfectly okay, not that I am justifying my own guilty incompetence. If adapting to the new realm of technological advancements means that I am trampling upon my own will and the beautiful world around us, I choose to stand behind the line of technology and reaffirm my love for a peaceful, slow-paced, and harmonious world that celebrates nature, genuine human connections, and a reconciliation of our relationship with our planet.

Nevertheless, I perfectly understand that technology does not always stand in our ways. Therefore, I will start recovering the files, and, of course, other important things that I have lost as I fell into the pitfall of technology. Meanwhile, I will try my best to adapt to my new Windows system that now functions differently, chasing behind the rapid yet transient shadow of technology. Hopefully, I will not get lost along the way.

Examining the paranoid, anxious, and always-rushing person that I had become, I hope that as humans, we can all take a step back, look around, and ask ourselves: are we controlling technology, or is it controlling us? Meanwhile, I will probably go to the Lenovo shop to have my computer looked at and be told to take good care of it, but if there were something that I would change about myself after my computer broke down, I now know, with conviction, that I will turn off my computer properly next time and stop checking my emails first thing in the morning.