The tech aboard the recent Mars rover 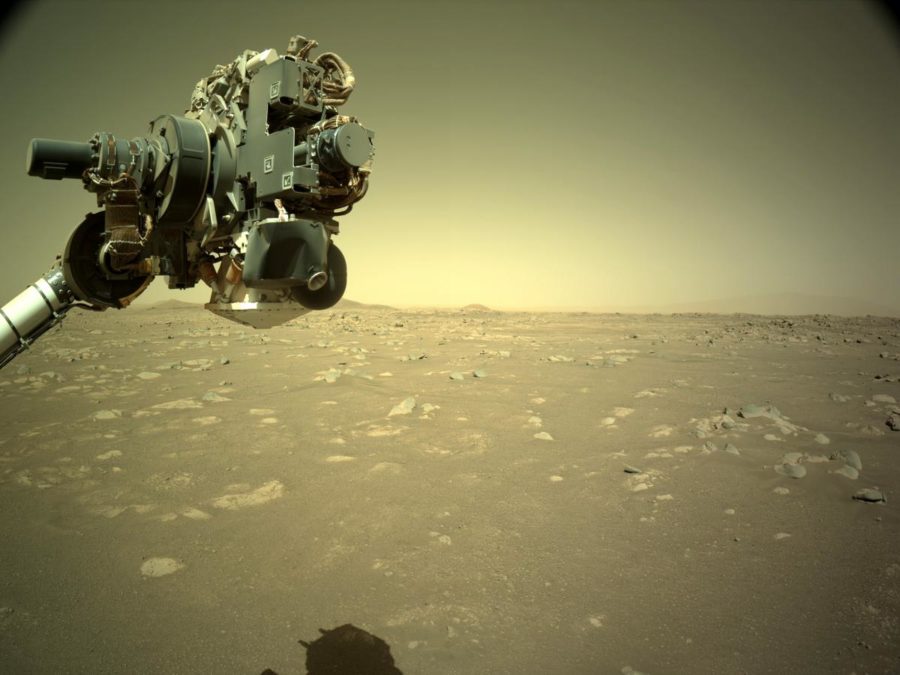 The Navcam (which assists in the driving of the rover) captured this image of the Mars landscape.

When Elon Musk proposed that humans should colonize Mars by 2050, his ideas sounded like science fiction to some. After all, we had just reached the moon half a century ago, and it is only a couple hundred thousand miles away. Meanwhile, Mars is hundreds of millions of miles away. The unfathomable gap in distance posed a tall order for the development of technology, especially since the moon landing was relatively recent.

However, Musk’s ideas are slowly turning from fiction to reality with the recent advancement of space exploration technology.  On July 30, 2020, NASA launched the Mars 2020 Perseverance Rover with five key objectives:

Explore a geologically diverse landing site.
Assess ancient habitability.
Seek signs of ancient life, particularly in special rocks known to preserve signs of life over time.
Gather rock and soil samples that could be returned to earth by a future NASA mission.
Demonstrate technology for future robotic and human exploration.

To accomplish all of these missions, the Perseverance has seven tools at its disposal.

The first tool is the Mastcam-Z, which is “an advanced camera system with panoramic and stereoscopic imaging capability with the ability to zoom.” Weighing in at nearly nine pounds and requiring 17.4 watts of power, this camera can resolve “between about 150 microns per pixel (0.15 millimeter or 0.0059 inch) to 7.4 millimeters (0.3 inches) per pixel depending on distance.”

Just for reference, the iPhone 5s camera had 1.5 microns per pixel. Installed to help explore the landing site and the rover’s surroundings, the camera has already delivered images of Mars’s surface, which can be seen on NASA’s website. The Mastcam is especially significant as it acts as the eyes for the rover.

The other tools onboard are for specialized analysis. The SuperCam effectively analyzes rocks and soil with a camera, laser, and spectrometers. With the laser, the SuperCam can analyze rocks from 20 feet away, allowing the rover to analyze rocks it would not be able to access by arm. Furthermore, it measures the atmosphere’s reactions with solar radiation.

The Planetary Instrument for X-ray Litchochemistry (PIXL) looks for signs of life by identifying chemical elements on a tiny scale with its x-ray spectrometer.  This device is capable of identifying 20 chemical footprints even in extremely small quantities, a feat similar tools could never come close to accomplishing.

The Scanning Habitable Environments with Raman and Luminescence for Organics and Chemicals (SHERLOC), like the SuperCam, uses cameras, lasers, and spectrometers. However, its main objective is to look for microbial life along with mapping mineralogy and organic compounds. In addition, it also carries scraps of space suit material to test how certain materials would hold up in the Mars environment.

The Mars Environmental Dynamics Analyzer (MEDA) moves away from the rocks and soil of the ground and looks to measure the weather through several sensors. Not only does it measure water vapor and help predict weather, but MEDA also examines radiation and the dust on Mars.

The Radar Imager for Mars’s Subsurface Experiment (RIMFAX) uses radar waves to “probe the ground under the rover,” allowing scientists to understand the geological features of Mars. It can detect water and ice, fundamental components of the search for life in any foreign planet.

And these tools may sound simple, but the number of factors engineers had to consider make them incredibly impressive.

“We used to have a rocketry program at Webb, and we learned quickly that engineering is not so easy…Design and execution are very different endeavors, and we should be in awe of both aspects of the Mars Robot Program,” said Steven Sittig, Observatory Director at Webb.

“To design so many different elements and self-contained instruments to meet the scientific research requirements, then integrate them into one platform with critical space and weight restrictions, then design it for space flight and execution on the Martian surface (near vacuum, extreme dust storms, daily temperature variations of over 100 degrees Celsius, solar radiation),” Mr. Sittig said. “And that’s just the design phase!”

“Then it has to be built to the most precise standards imaginable by multiple teams, bundled up to be transported to Florida for launch and placed into the launch vehicle, which is a massive engineering project itself,” Mr. Sittig said. “Well, you can see why the JPL employees were so jubilant when the Mars landing was seen to be successful.”

Indeed, constructing the small robot was a tall task with costs of approximately $2.7 billion. But the varied data the rover will gather are invaluable to the continued exploration of Mars to build the Martian future that Elon Musk envisioned.