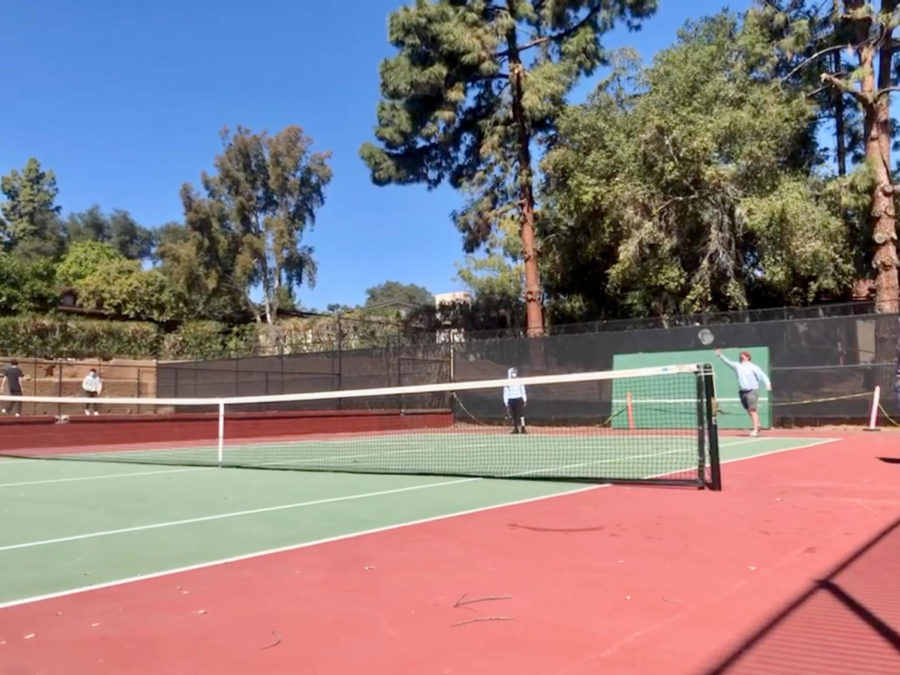 VWS and WSC tennis players hit the courts on March 8th and 9th to compete against players from Bonita High School and St. Margaret’s Episcopal School. Students were thrilled with excitement but also nervous considering that in-person play has been suspended for quite some time. Although Webb did not come out on top, coming back and playing the in-person was a win.

“I’m really happy to be able to come back to campus to compete a little bit this year,” said Alice Phung (‘21), doubles #2 of the VWS Varsity tennis team. “It’s still really fun, though it’s sad that much of the team we would’ve had this year can’t come to campus. We also have only seven players, when nine players are needed for a full team. So, every match, we lose three games instantly, which is more pressuring. Having a small team is nice though, as we really get to know each other and form a strong team bond.”

The WSC team also does not have a full team, so they lose three games as well.

Tennis practices have been going on since December when Webb decided to reopen campus for sports practices. Players have had the chance to improve their skills for a couple of months, but it is difficult playing against other teams who could have been practicing for a longer time frame. The WSC team was defeated by Bonita 18-0 and the VWS team were beat 12–6 by St. Margaret’s.

In spite of the fact that Webb did not win their beginning tennis matches, there were players who individually stood out. On VWS, Faith Ferry (‘21) and Jenna Hawkes (‘21) helped the team by winning three sets in doubles. Camile Casper (‘24) and Alice Phung (‘21) were another pair of doubles who won two sets. Finally, Nicole Rabadi (‘24) took a victory while playing singles. On WSC, Ryan Weigand (‘23) had an outstanding outing, despite it being his first-time playing tennis. Bonita and St. Margaret’s are generally tough competitions, so although the loss was not ideal, the team fought and tried their best.

“I was nervous to play against another school for the first time, but Coach Ron encouraged me to do so, and I’m glad he did,” said Nicole Rabadi (‘24), singles #2 of the VWS Varsity tennis team. “It has been so much fun. However, I feel like if I had more time to practice, then I definitely could’ve played better. Hopefully as the season progresses, I can improve my game.”

While coming back established some sense of normalcy among players, COVID-19 regulations assured that all players and coaches were safe and protected.

Everyone was required to wear a mask (even while playing), social distance, and there were sanitizing stations to clean hands and equipment if needed. Additionally, Webb players were tested for COVID-19 prior to the game and had to fill out the Passport app before arriving to campus.

“I felt safe coming back to campus and playing,” said Jaydyn Akpengbe (‘22), singles #1 of the WSC Varsity tennis team. “Webb had a lot of restrictions in place so we would not get infected which was nice. I wish my friends and family could watch me in-person, but I appreciate Webb trying to keep everyone safe and broadcasting the matches on NFHS.”

However, there are also students who decided to stay home and not compete because of the fear that they are not protected.

“There are a couple of reasons why I chose not to return to campus,” Nina Luo (‘22) said. “There are some schedule conflicts as my younger brother is attending in-person school right now and needs to be picked up the same time as afternoon activities. I also have grandparents at home and although they have been vaccinated, I don’t want to go and get them infected. I’m planning on returning to campus next school year when hopefully everyone gets vaccinated.”

Tennis was the first sport to return to competition, and many more sports will hopefully be returning soon, including: baseball, swim and dive, basketball, and more.

Due to the fact that tennis is a non-contact sport and the courts are spacious, it was an ideal sport to kick off athletics on campus. The recent tennis matches suggest that Webb is prepared to bring more students back safely for more on-campus activities, especially with the declining coronavirus cases. Be sure to follow future tennis and sports games on NFHS!