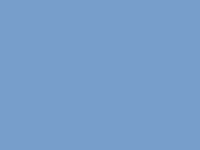 “3 Nights” just makes sense to be described as a cerulean blue; not a blue out of sadness, but a blue out of bittersweet separation. This song features a more light-hearted take on a relationship that goes from companions, to lovers, to eventually drifting apart. The upbeat tone may fool the listener at first, but there is a significant shift in tone from Verse 1 to Verse 2, perhaps out of desperation of feeling the drift. The song wraps up with the chorus once more, putting a close to both the song and the relationship.

“House of Memories,” Panic! At the Disco