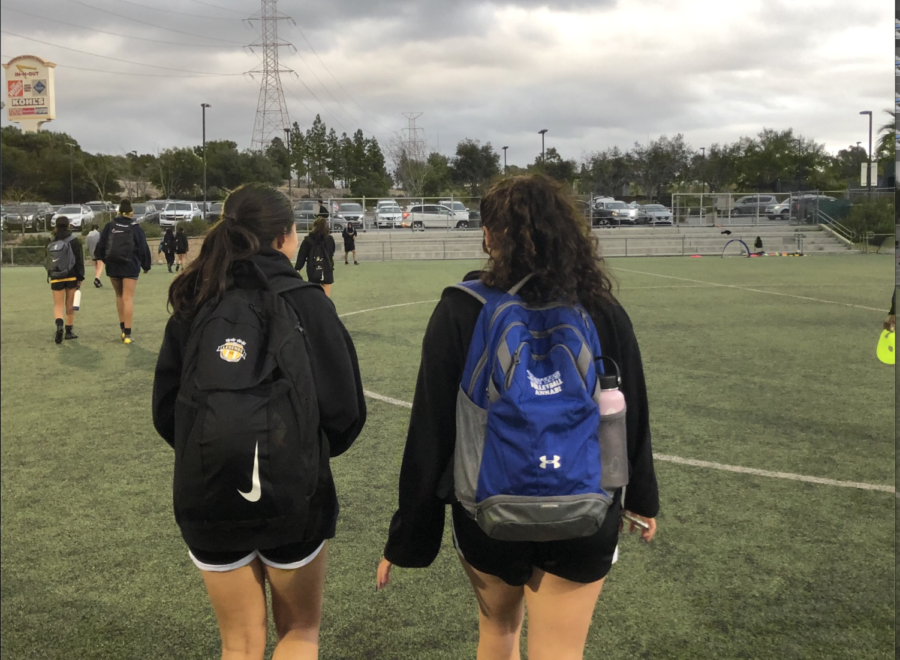 Eva Annabi (‘23) and her friend walk together after club soccer practice.

Dedicated athletes had previously been asked to choose between club and Webb sports. Yet, Webb recently announced that they will now be allowing club athletes to simultaneously participate in Webb sports starting from Monday, April 19th, after spring break.

Webb had previously required club players who were signed up for a sport this season to choose to play either their club or Webb sport; if the player gets infected, they will only infect one team instead of two.

Stephanie Baron, Surgical Physician Assistant and Health Center Director, spoke on March 22nd, 2021, on behalf of the Medical Advisory Board, regarding the recent change in allowing club players to play on Webb sport teams.

“As a county, LA county has the most cases in the state. To give some perspective, if LA county were a state, we would rank in the top 10 in number of cases in the entire country,” Ms. Baron said. “So, as a result, our Health Department has been more restrictive than the rest of the state in term of guidelines.”

Ms. Baron then explains the thought process behind the previous decision for club players to choose to play with their club team or Webb team.

“What the Health Department was finding was that club players were traveling out of state for tournaments, etc. and would have more outbreaks on their teams,” Ms. Baron said. “To avoid spreading to other groups of people, they were very wary of allowing club players to also play for their schools and potentially spreading the virus to their school teammates.”

She also explains the improving case rate which allows for LA county to move into the red tier allows for guidelines to modify and become less restrictive. While more recent news explains that there is a possibility of Los Angeles County to the orange tier in due time.

Moreover, Ms. Baron reveals the reopening protocol that all youth sports must follow, which include club and school sports.

Stephen Wishek, Director of Athletics and Afternoon Activities, also spoke regarding to how students had to choose between Webb and club influenced many sports.

“In addition to club soccer players, we have had club swimmers and club volleyball players who had to make the same decision and choose between club programming and school programming,” Mr. Wishek said. “While soccer had the greatest number of impacted athletes this was an issue that affected Webb students across a multitude of sports.”

He also explains his faith in the Medical Advisory Board and support on their past and recent decision.

“The Medical Advisory Board is constantly reviewing our health and safety protocols and with community spread numbers coming down in Los Angeles they felt it would be safe to allow multisport athletes following the break,” Mr. Wishek said. “I am looking forward to having these students back and competing safely with Webb’s teams!”

Club players have hopeful and positive reactions to the recent news.

Maksym Graham (‘23) is club soccer player who also plays on the WSC Varsity soccer team. He chose to play with his club team.

“I was very excited to see that Webb finally allowed club players to also play high school soccer. My friends on my club team were allowed to play so I was anxious to see when I would be able to join them,” Maksym said. “Although I am slightly sad I was not able to play previously and our season has been reduced, I am ready to make the remainder worth it.”

Reece Ollivierre (‘23) is a player on the VWS Varsity soccer team who chose to play with her club team.

“I was actually a little worried upon hearing the news because it meant that I would have to choose between club soccer and the school. I had made commitments to both before COVID and I feel as if I have a responsibility to carry out both of my commitments,” Reece said. “Even if I will have to be flexible and make sacrifices to tend to both responsibilities, I trust Webb to go the extra mile to ensure everyone’s safety and I can’t wait to get back on the field with the team.”

However, there are also players who chose Webb sports over club. Daniel Serna (‘23) is a travel ball player on the WSC Varsity baseball team who chose to play with Webb.

“When Webb first came out with their first statement, I already knew I was going to choose high school sports,” Daniel said. “During this time, travel ball teams typically shut down for CIF, so I could’ve chosen travel ball over high school ball, but it would be nothing but practices Although, I was surprised that Webb did allow for both club and high school sports.“

Regan Ollivierre (‘24) is a freshman club soccer player who is concerned on how both club and Webb soccer can coexist.

“My first reaction was I was excited to be able to play with the Webb soccer team as it is something I have never done before,” Regan said. “Additionally, I am concerned I may not be able to make all the games or practices due to my own commitment to my club soccer team.”

All this conversation still begs the question: does the recent announcement guarantee club players’ return to Webb sports? CDC has come out with a warning to stay at home and avoid any unnecessary travel upon predictions of spiking COVID because of the upcoming spring break. We will have to wait and see if a potential spike in COVID-19 cases would mean that club players can no longer compete in on-campus Webb sports following spring break.