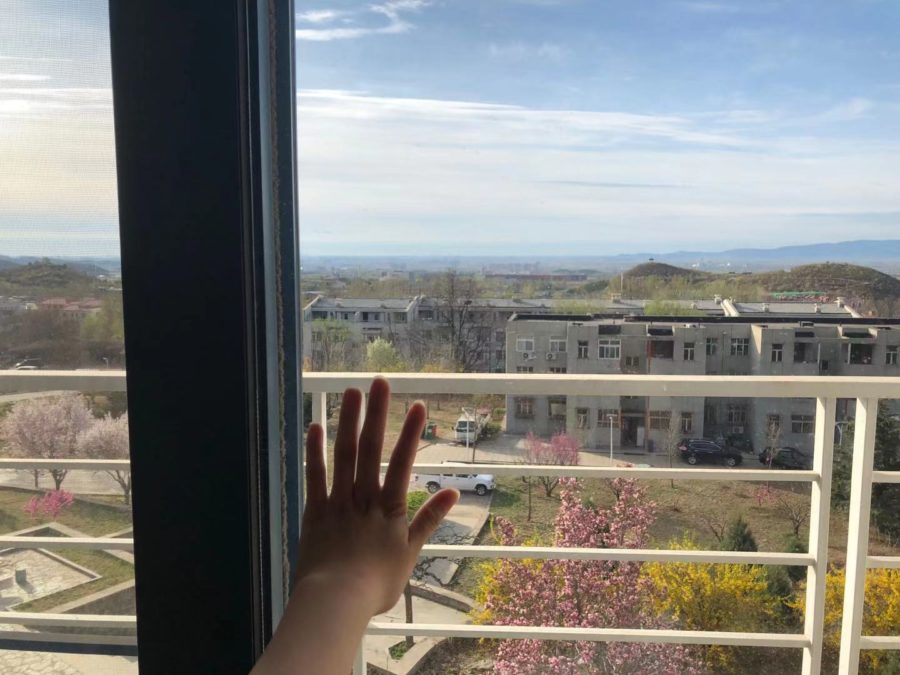 The locked door in an isolated hotel in Beijing separates international travelers from the rest of the world as they are put into another round of hotel quarantine to meet the 14+7 requirements.

One year ago, during the beginning phase of a pandemic that would last for more than a year, I was the last student to leave campus but one of many international students who crossed the border between the United States and China. After a strenuous flight without food or water, the first place where I could finally take off the N-95 face mask and take a long, deep breath was the 20-square-meter hotel room one block away from my actual home.

Exactly one year after my first 14-day hotel quarantine, I found myself under a second and hopefully last round of hotel quarantine, spending the time of the year with warmer weather and blossoming flowers in an isolated space—physically separated from my family, school, friends, and the sun and rain and everything else that used to buoy my existence.

It was the first time that I travelled internationally in a year, and I had to give up my mobility for 21 days although the actual stay was only seven days long.

The previously busy international airport in Guangzhou turned into almost a deserted place with empty stores, restaurants, and shops. As the already high expenses of international travel skyrocket, it has become more difficult to cross the literal borders as well as overcome cultural barriers that allow diversity to persist in a globalized world.

With globalization, global citizens have grown interdependent and sought ever new opportunities, technology advancements, and the representation of more voices.

However, also before the pandemic, crossing national borders as a resolution to the refugee crisis had been extremely difficult. The right to travel across borders freely, a right protected by the Universal Declaration of Human Rights, became completely unwarranted under the pandemic. Now, the fusion, mingling, and exchange of materials, cultures, and beliefs in a world that encompassed the diversity of people and thoughts slowly diminished.

As citizens from the more developed world relentlessly pursued globalization, they further expanded the gap between the rich and the poor, allowing the “core” to penetrate into the “periphery” in virtually every aspect of life, forming economic, cultural, and technological dominance and even monopoly. The fast-paced competition and extraction of resources under globalization also further alienated global citizens along national lines and planted the seed for nationalism and isolationism, a trend that surged under the pandemic.

Some argue that our world reached the peak of globalization right before the pandemic hit. Now, if there is a spectrum to globalization, humans are going downhill as the pandemic forces us to remain on one side of a border, unable to easily cross it again.

By May 2020 every single country had imposed some kind of travel restrictions, and until today, very few nations have lifted them. Under the decline of international flights and nearly bankrupt airline companies, the frequent cultural exchanges ceased and conflicts arose.

My current isolation from the rest of the world only mirrors the many types of disconnection and separation that are direct products of the pandemic. Behind travel restrictions and a normalized new world, we, people from across the world, find ourselves being put into various categories that dictate our health statuses as a direct consequence of our socioeconomic standing, races, and identities. Under unjust laws exacerbated by racism, even the coronavirus discriminates.

It would be reckless for me to complain about being put into a quarantine room, where I had free access to the Internet, delicious food, and a comfortable space to work and sleep in, despite the railway standing right outside my window that brought me constant interruptions but signs of liveliness. Meanwhile, many struggle for basic access to health care and rely on relief bill for simple survival.

Attending SDLC as a representative, I engaged in various discussions and conversations about the pandemic and its connection to our identities. When almost half of the room acknowledged that their family members or friends had been infected with the coronavirus, I reexamined my privilege as someone who could attend classes in the day, jog around the city in the afternoon, and sleep in a room of my own when night comes, barely having to worry about the actual effects of the pandemic before quarantine. Despite quarantine requirements, my own privilege translated directly into my recent travel plan, my optimal health conditions, and an interrupted education that I am receiving.

The pandemic only reveals a small tip of the iceberg of the inequality underlying the globalized world. Now, as the world experienced its first break from globalization, it bleeds from its aftermath: it has become ever timelier to repursue justice, equity, and diversity, and we do not have to wait for a bleak “return to normalcy” to begin the fight.

In a new stage of globalization in which the flow of ideas matters more than factory production and foreign investment, it makes sense to rely on the limited cross-national connections that remain to foster antiracist ideas in our pursuit for justice, equality, and diversity.

Although globalization left an irreversible mark, we cannot completely relinquish the connection and diversity gained from the process, and the current isolationist approach is not going to get us anywhere in our pursuit for equity and justice for all groups of people.

Instead of remaining isolationist and uncollaborative, nations should work together and share vaccination advancements because as humans, we are in this together despite immense cultural differences. With such collaborations, we can look forward to the recovery of mobility and enriching interactions for decades to come.

In a world that has not yet overcome the dreadful consequences of continued isolation, we have to first start by challenging the invisible lines that set us apart and cross the metaphorical divisions to eventually overcome the physical borders to bring back social fluidity, flexibility, and the possibility of equity. In a world with persisting racist ideas and policies, the first step is to use globalization and the rapid flow of information to challenge such human barriers, both metaphorical and physical.