What is the NCAA’s real mission? 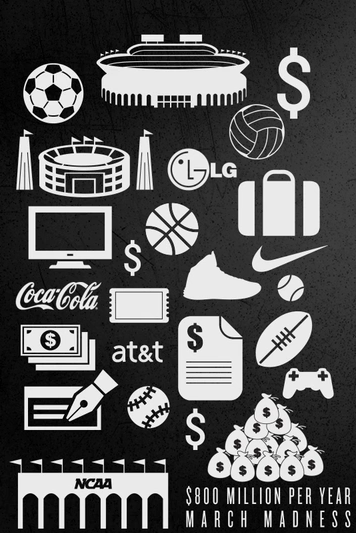 The Price of College Sports

College sports have been around since the late 19th century. Although they received little attention during the early stages of their formation, college sports have transformed into one of the most successful sports businesses in the world. The National Collegiate Athletic Association, known simply as NCAA, is a non-profit organization that offers 1,281 collegiate institutions the opportunity to participate in a wide variety of sports. The NCAA makes around 10.8 billion dollars per year, which is impressive for a company that calls themselves a “non-profit.” This money comes from television deals, ticket sales, and other investments.

In 2013, Directors Tyler Branch, Andrew Muscato, and Domonique Foxworth sought out to expose the harsh realities behind the NCAA actions. Schooled: The Price of College Sports, the documentary created by the three men above, highlighted the historical, economical, and troubling aspects that make NCAA a multi-million dollar business.

NCAA President, Mark Emmert has been vocal about the reasons why college athletes aren’t supposed to be paid. On numerous occasions, including an NCAA conference in 2012, Emmert was quoted saying, “They’re not employees, they’re athletes.”

According to Business Insider, college football and basketball, on average, bring in approximately 40 million dollars per year. Without the athletes, who Emmert doesn’t view as employees, athletic departments could lose their number one and two sources of income.

On the NCAA’s website, the company states that 96% of their annual revenue goes to the universities that participate in Division 1, Division 1-AA, and Division 3 athletics. The other 4% of revenue funds employee salary, central services, and business operations. In 2011-2012, the NCAA finished their year with 871.6 million dollars in total revenue. Five years later in 2016, the NCAA brought in a total of 995.9 million dollars in total revenue.

The most compelling money ploy administered by the NCAA is the now discontinued NCAA video game series. From 1993-2014, the NCAA produced video games, featuring sports such as football, basketball, and baseball. The football series ran for 21 years, while the other two sports received far less attention from video game connoisseurs.

In 2009, former UCLA Basketball players, Ed O’bannon, sued the NCAA for using his likeness without his permission, which is a violation of the Sherman Antitrust Law. The case evolved far further than both parties could’ve imagined. What started as a personal case, transformed into a nationwide case that awarded compensation to all players that were featured in an NCAA video game from 1993-2014. Following the case, EA Sports, the creator and producer of the NCAA video game series, decided that it would remove itself from any video games involving college sports.

Branch, Muscato, and Foxworth are quick to highlight the similarities between a student-athlete and indentured servant. Arian Foster, a former running back in the NFL and the University of Tennessee, said, “I looked up the definition of indentured servant and it’s exactly what a student athlete is. You get food, you get accommodations, and your get training, but you don’t get paid.”

The bottom line is that any student-athlete represented by the NCAA is prohibited from receiving any compensation for their play in their respective sport. If an athlete is injured during athletic competition, they do not receive workers compensation. Athletes don’t get paid for any type of likeness exploitation, including jersey and ticket sales, banners, posters, etc. Regardless of the accolades athletes rack up on their respective playing fields, they will never be rewarded with gifts or money. However, they will get paid in publicity and knowledge provided by the universities that only require a 2.3 GPA throughout the school year.

The Price of College Sports