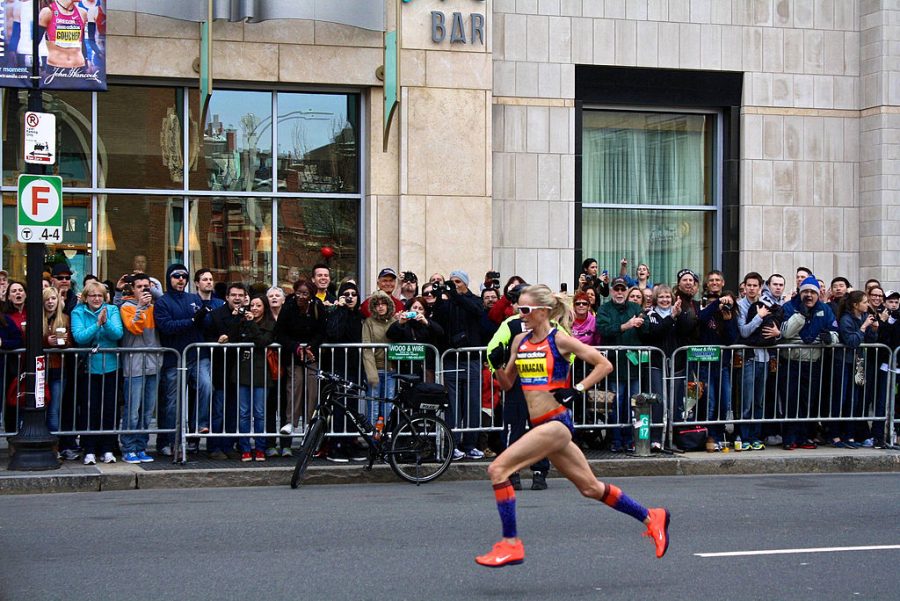 Shalane Flanagan has always been an avid marathon competitor. Here she is pictured running the Boston Marathon in 2013. Graphic courtesy of Wikimedia Commons

Flanagan grew up in Marblehead, Massachusetts, surrounded by veteran cross country runners. Her parents influenced her to take up the passion, and she even married a former collegiate track and field star, Steven Ashley Edwards. Flanagan’s major cross-country success started during her years as a long-distance competitor at the collegiate level. According to USA Track and Field, she represented the University of North Carolina as a two time NCAA cross country champion, NCAA Cross Country Runner of the Year, ACC Athlete of the Year, and Honda Athlete of the Year for Cross Country.

Years later, Flanagan’s accomplishments only multiplied. According to her Training in The Bay profile, Flanagan proudly holds American record times for the indoor 3000m, the indoor 5000m, and the 15k road race. But her long distance victories don’t stop there; Flanagan nabbed the bronze medal in the 10,000m 2008 Olympics (which was later upgraded to silver), as well as 3rd place at the 2011 IAAF World Cross Country Championships, and second place in the 2010 NYC Marathon.

Shalane Flanagan hadn’t been seen on a marathon course since the 2016 Rio Olympics, and her extreme comeback came with an unofficial time of 2 hours, 26 minutes, and 53 seconds, a personal record. Due to a severe back injury, Flanagan was, unfortunately, unable to compete in the Boston Marathon this year.

On Sunday, November 5th, 36-year-old Shalane Flanagan became the first American to win the women’s New York City Marathon since 1977. In the last three miles, Flanagan was able to pass Mary Keitany, a three-time consecutive NYC Marathon winner, and beat her by one minute.

Flanagan held a straight face until she burst through the finish line, throwing a fist up in the air and letting out a jubilant cry. In her interview with WABC, Flanagan said the moment of crossing the finish line was, “indescribable.”

Flanagan cried tears of joy when her her name was announced as the winner of the 2017 New York City Marathon. She then held up the American flag to the crowd, before wrapping it around herself and smiling triumphantly up at the crowd.