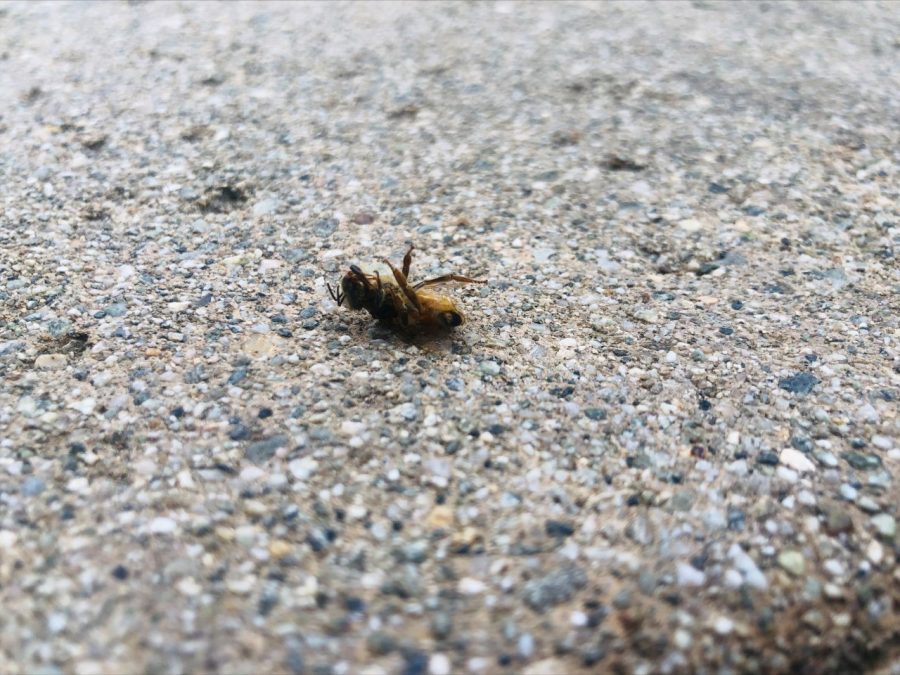 A dead bee lies in front of Fawcett Library

“Was this act of violence and deprivation of life necessary?”

On the morning of October 7th, Webb’s STAS group on Outlook was teeming with emails. Within minutes, dozens of replies entered conversations, all responding to the initial question that Hunter Lange (‘22) posed regarding the decision to remove bees.

Despite the recent prominence of the bee situation, their presence is not new to Webb. In fact, there have been two beehives on campus since the beginning of the school year, one on the trunk of the oak tree in front of North Hutch, and one at the back of the library. One student was stung by a bee in the hive in front of North Hutch, which is why facilities contacted beekeepers.

The particular outbreak in the library is the result of the flushing that forced the bees outside of the hives.

Facilities scheduled flushing of the two hives at the end of August after the report on the beehives and student stings. The goal was to keep the bees out of the current hives, with the hope of relocating them on and off campus to avoid injuries of students.

“[After reports on students who were stung], we contacted our beekeeper to see if he could remove the hive or flush them out,” said Dan Fraley, director of facilities. “We finally got on their schedule yesterday [October 6th] and they came out and flushed both hives out, trying to save as many bees as possible.”

On October 6th, the beekeepers arrived on campus and placed products on the hives that encouraged relocation. Unfortunately, no one besides the beekeepers were present during the flushing process, so information on the specific procedures is limited.

“Once they flushed both the hives out, it was when the bees started finding ways into the Fawcett Library to leave their hives,” Mr. Fraley said.

After the flushing, the bee populations experienced extensive stress, and while most quickly left the hives, many became disoriented and travelled through conduits on the exterior of the fireplace wall and entered into the library, dying as they entered the space. Webb facilities and library staff quickly reacted to the situation by quarantining the library area with plastic and tape so that any bees that came in stayed in that one area.

Although Webb took immediate measures to minimize harm, an estimated 1,000 out of the 40,000 bees in the colony died when they traveled too far from the hive. At the same time, several students got stung.

The disorientation of the bees at the back of the library led to the temporary closure of the library on October 6th as staff sought to clean the space and ensure it would be safe to enter. Until the time of publishing, areas by the fireplace remain closed to protect students from bee stings and allergic reactions.

After flushing, the beekeepers’ work is done, and the two hives on campus are abandoned and closed off, which is why the bees are outside, now flying around outside the back of the library.

“We are waiting for the population to find a new home,” Mr. Fraley said. “Hopefully somewhere on campus, so they can pollinate the flowers.”

The bee crisis in the library soon initiated conversations regarding the ethics behind the school’s treatment of bees. Some students believed it to be a necessary measure to ensure the safety of students, while some students took issues like animal preservation into consideration.

“I think that Webb’s treatment was the quickest way to keep us safe and to keep classes going in the library,” Isaac Nicolosi (‘25) said.

The conversation escalated on the morning of October 7th, with topics ranging from proper ways to handle the situation, weighing human and animal lives, as well as the proper etiquette to engage in debates on STAS.

Webb has a long tradition of championing difficult conversations and encouraging students to disagree respectfully, and the STAS conversations inspired students to continue broader discussions on environmental issues while avoiding simplifying problems with polarizing opinions.

Some students who wished to further discuss the issue held a “bee conference” during lunch, but only three students showed up.

While the debate started on the most appropriate ways to handle the situation, the conversation became more proactive as students provided relevant resources and defined their roles in the community through voicing their thoughts.

“It is a decision that has already been made, and there is no way that we can go back,” Ethan Undello (‘25) said.

Webb was able to quickly respond to the crisis to ensure the community’s safety, and Stephanie Baron, Health Center Director, sent out an email on the evening of October 6th to inform students on caring for and treating stings. Tips include quickly removing the stingers, icing the wound, and taking medications if necessary.

The conversations that the event sparked have already shed new light on what students prioritize in the community.

“It is not just a conversation about bees,” Kenny Clay (‘25) said. “It is about how we interact and preserve our environment. I don’t like how the conversation turns into pro and anti-bees. Not wanting bees in the library does not mean that you are anti-bee. I don’t think the terms are helpful here.”

It is challenging to ensure the peaceful coexistence of humans and animals on campus, and the ultimate goal behind flushing the bees and quarantining the library is to guarantee such friendly coexistence, minimizing injuries on both sides.

“[Webb is] right on the edge of wilderness,” Mr. Fraley said. “We have bees, we have bears, we have coyotes, and bobcats. That’s all part of nature, and we are actually invading their space. So, we try to handle all the situations accordingly. This time, some bees perished, but the colony as a whole survived, and that’s what we tried to do.”

Note: Dr. Mark Dzula, the adviser of the Webb Canyon Chronicle, is also staff for the Fawcett Library.