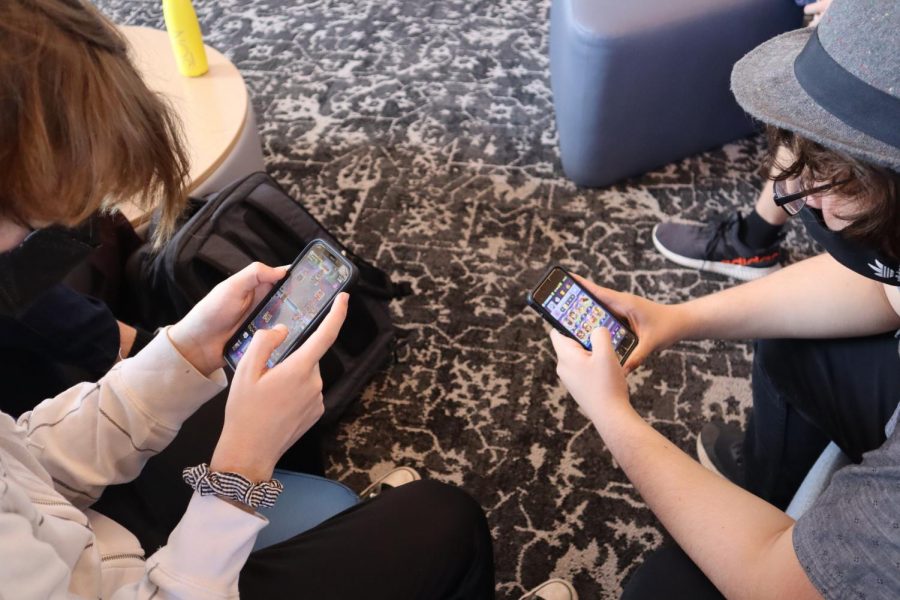 Ryan Walker (‘23) and Alfonso Alvarez Seara (‘23) are seated in the Hooper Center, leaning into a game of Clash Royale. Seated nearby are other students, some passing the time during their free block and others catching up on homework. Both Ryan and Alfonso, not speaking a single word, are nonetheless fully immersed in the game. Ryan can be seen defending an attack from his opponent, his focus locked on his screen, and Alfonso is casually making adjustments to his cards.

You feel a rush of adrenaline as class ends and you saunter off to grab some lunch. As you wait in line, you choose to play a quick Clash Royale match, only to realize that your opponent vastly outmatches you. They have a fully maxed deck and Level Fourteen E-Barbs; you look at your own cards and already know you will lose.

How did the game become this way? And why is it becoming more difficult for players to upgrade to higher levels?

Late last month, Clash Royale a new card rarity and level; however, with the majority of players already struggling to reach Level Twelve or Thirteen cards, this update created more problems within the game.

Clash Royale is a strategy game based on Clash of Clans, another one of Supercell’s games released in 2012. Cards, as they are referred to in the game, can be upgraded to higher levels, increasing their health and damage output, which means they can do more damage to enemy troops. It is useful to think of higher-level cards as more desirable and subsequently more expensive to attain.

The addition of Level Fourteen came at the worst possible time — right after the end of an event in the game called Slash Royale. From October 18th to 26th, all gold and star level costs were reduced by half, which meant a lot of players were out of gold, gold they frivolously spent without knowing that Level Fourteen was around the corner.

“I don’t think it was fair for high-level players because all of the gold they spent on cards backfired when they announced Level Fourteen,” said Oma Sukul (‘23), Editor of Media. “Players could have instead saved their gold and not wasted it on cards they didn’t actually want.”

Most non-paying players emptied their reserves of gold on their cards and in many cases, players upgraded random cards because of cost reductions. Also, for the first time in Clash Royale’s history, a massive gold rush gave players the opportunity to win over 200,000 gold in multiplayer battles.

On the surface, this event was easily one of the most beneficial to players of all types, most of all non-paying players. However, a few days before the end of Slash Royale, Supercell announced the release of Level Fourteen.

“I think the new update wasn’t bad, and it was good that they had Slash Royale, but I think people should have gotten more refunds for the gold they used to upgrade before the event,” Nicolaas Grobler (‘24) said. “Overall, it wasn’t handled the best and if people wasted any gold, all of it was now gone.”

The announcement of Level Fourteen was a bombshell for many players since most had already spent all their gold and could no longer upgrade cards. Players can attain gold by spending real-world money to open chests and by using gems. However, most players are either unable to or choose not to spend money on in-app purchases.

The crux of Clash Royale’s struggle between adding new content and keeping the game balanced is that non-paying players will often never have access to in-game elements like Level Fourteen cards. Likewise, the newly added card rarity, Champions, is only available to players who have already attained King Level Fourteen. This means only a small minority of players, most of whom are willing to spend money, will experience the benefits of this update.

“Everyone should be able to use the Champions,” Nathan said. “I think it should be Level Twelve and up or Level Thirteen and up.”

However, due to a new change made to Challenges, some may point out that every player, regardless of their level, can access these coveted Champion cards. Before entering a Challenge, players can create a deck with any card in the game, including Champions, even if they haven’t unlocked them yet.

This change affects those who play in ladder-based matches, a way for players to gain trophies. Since they will have to use cards from their own collection, players who are not King Level Fourteen will not be able to use Champions.

Even though it is great to see Supercells’ continued dedication to their game — continuing to update the game with fresh content — there remains an inherent problem with the game’s economy that ensures most free-to-play players will never see the benefits from these changes. Especially for Webb students who depend on Clash Royale as a means of entertainment during lunch, school breaks, and after classes, this update will undoubtedly diminish the enjoyment they receive by playing this game.