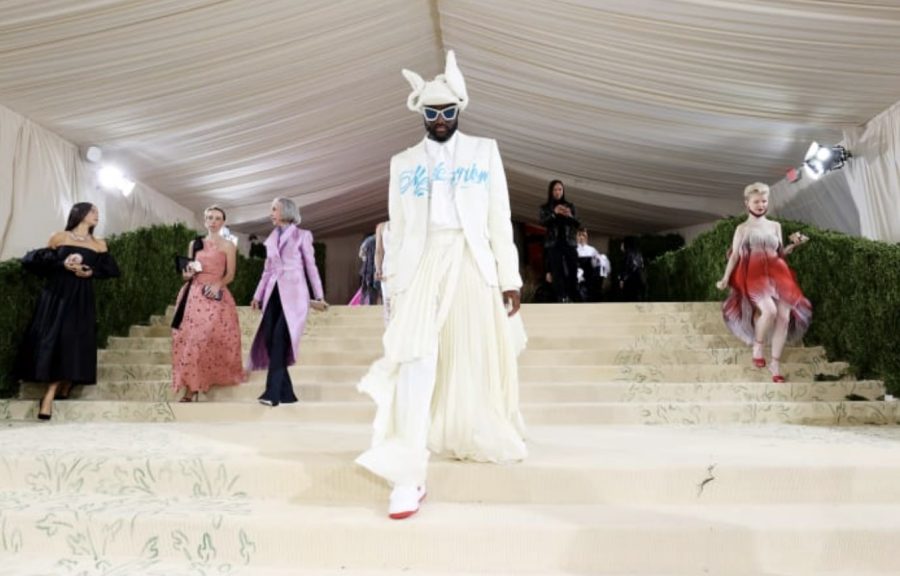 Virgil Abloh is pictured at the 2021 Met Gala on September 13, 2021, in which the theme was “Celebrating In America: A Lexicon of Fashion.” He collaborated with Takashi Murakami to create his outfit. This picture captures just one of his many collaborations.

On November 28th, 2021, heartbreaking news of the death of fashion designer Virgil Abloh shook the fashion world because of Abloh’s work with Louis Vuitton and the founding of Off White. An Instagram post announced his death due to his two-year battle with cardiac angiosarcoma, a rare type of cancer that affected his heart.

At only 41 years old, Virgil was able to accomplish much in the fashion industry as well as leave a lasting impact on the world. Many Webb students are familiar with Virgil’s work and were heartbroken by his passing.

“I was very sad to hear about his death because his work is not going to be created anymore,” Dillon Anabi (’22) said. “Also, he was a very good person with a wife and young children, so it was heartbreaking to hear. Virgil was unique in his approach to creating not only sneakers but also clothes. He influenced a lot of people to alter how they design and dress.”

Right after receiving his bachelor’s degree in civil engineering at the University of Wisconsin-Madison, Abloh began working with Kanye West, a famous music artist. He then went on to obtain a master’s degree in architecture from Illinois Institute of Technology, where the Rem Koolhaas building sparked his interest and inspired his entry into the world of fashion.

Abloh’s 2009 internship at Fendi in Rome caught Louis Vuitton CEO Michael Burke’s attention in the best way. As a young mind in an antique brand like Fendi, Abloh brought lighthearted energy and fresh thoughts to the studio. His performance there foreshadowed his future work with Louis Vuitton.

In 2009, during his show-crashing appearance at Paris Fashion Week, he said in an interview with W magazine:

“We were a generation that was interested in fashion and weren’t supposed to be there. We saw this as our chance to participate and make current culture.”

The 2000s was a time when, like today, European designers dominated the fashion scene, and not many black designers were given the opportunity to work for these couture houses, let alone succeed.

Working with Kanye West, Abloh became the creative director of Donda, West’s creative agency, and the art director of the Grammy nominated album Watch the Throne by Jay-Z and West.

After forgoing his first brand, Pyrex Vision, Abloh found Off-White, a multi-platform creative endeavor based in Milan, most famous for its medium of fashion. With Off-White, he established his signature hovering quotation marks, which can be seen on many of Off-White’s current pieces.

From opening his first concept store in Tokyo to being nominated for an LVMH prize, Abloh’s career teemed with successes as he secured his footing in the fashion world as an iconic up-and-coming designer. Perhaps one of his first biggest successes, however, is his sneaker partnership with Nike, The Ten, where he re-creates ten of Nike’s most iconic shoes with Abloh’s signature safety tag around the laces.

As an African American designer who grew up with immigrant parents, Virgil’s story inspires millions while being a self-made man in a notoriously exclusive business. He redefined streetwear, bridging its gap with luxury brands and forming collaborations that kickstarted the current industry infatuation with these kinds of genre breaking partnerships, such as the recent LV x NBA collaboration or the Supreme x Tiffany & Co collection.

Other than his work in fashion, he was an activist who created opportunities for the underrepresented. In 2017, he created a uniform for Melting Passes, a team of immigrated soccer players in Paris who were excluded from playing in official competitions. He also provided funds to fix park and play facilities in Chicago and supported skateboarders and surfers in Ghana. In response to the Black Lives Matter movement, he launched the “Post-Modern” Scholarship Fund in August 2020 to support Black-owned businesses, while mentoring younger black designers throughout the peak of his career.

Virgil was loved by many and so were his creations. Many Webb students, like teenagers around the globe, own or yearn for Off-White clothing or shoes as they are trendy and coveted by streetwear enthusiasts.

“His way of style and fashion when making clothes was a lot different from others, and he started many trends,” Nick Grobler (’24) said. “I was sad to hear about his death because of his lasting impact on the fashion industry, but I hope his style of fashion continues to grow.”

Virgil’s legacy spans beyond the fashion industry to the Webb community. He was able to reach many audiences with his designs and activism work. Virgil will be remembered for years to come as his legacy will be carried through generations.