Stephen Sondheim: the life and legacy of a musical theatre genius 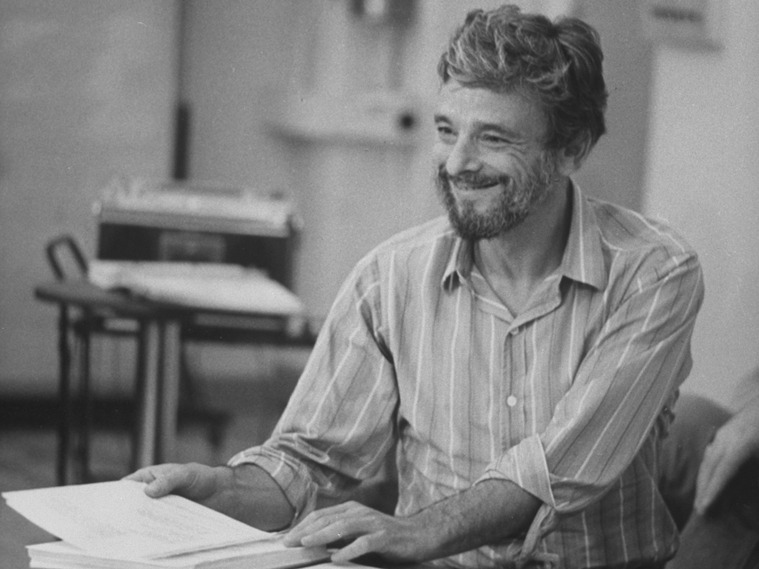 On November 26th, American composer and lyricist Stephen Sondheim passed away at the age of 91. Although Sondheim has passed, his contributions to the musical theatre community, through his works or his inspiration to young artists, will never completely leave us. He will be missed. (Photo: Martha Swope/New York Public Library Digital Collections, 1981)

In the early hours of Black Friday, a source of light in the worlds of theatre and music dimmed: American composer and lyricist Stephen Sondheim passed away at the age of 91, the artist’s death attributed to cardiovascular disease. Sondheim’s impact on theatre and music alike is immeasurable, and the hole left in his many admirers’ hearts is just as enormous.

“There was a lot of crying, as I think most people in the theatre community were very touched, and moved, and shocked, and upset,” said Stefanie Plumley, Webb’s Fine Arts Department Chair and resident theatre-person. “I mean, we knew he was old, but he was a larger-than-life figure; it was almost difficult to believe that he was mortal. The fact that he had just left so suddenly was a huge shock.”

Sondheim’s death shattered the theatre community’s hearts. On December 8th, all of Broadway dimmed their marquees’ lights in wake of the composer and lyricist’s passing. As the lights grew darker, “a city of strangers,” as Sondheim would have put it, cheered in his honor. What Sondheim fans were now left with were only memories — of which they had countless.

“I think I was in high school, and I was working on a show, and the composer of the show, knowing I didn’t know much about Sondheim, put together a tape called ‘Discovering Sondheim,’” Ms. Plumley said. “I remember listening to it in my car and it was one of the first moments I remember just laughing out loud at a song lyric, and I was like, ‘Oh! This is musical comedy!’ It was from A Little Night Music, a song called ‘You Must Meet My Wife.’ Everything just seemed to be so organic and whole about this whole song.”

At an early age, musical theatre legend Oscar Hammerstein II mentored Sondheim, teaching him not only to write musicals, but also to create a voice — the unique Sondheim sound — that would influence the works of musical theatre writers for generations to come. Musicals like West Side Story (1957), Sweeney Todd: The Demon Barber of Fleet Street (1979), and Into the Woods (1987), among over a dozen others, feature Sondheim’s genius and are quintessential works of theatre and music alike.

“Ever since I was, probably, in junior high, I had a VHS tape of the original PBS recording of [Into the Woods],” said Dr. Elizabeth Cantwell, Chair of English and Humanities and Sondheim Fan. “I would pop that VHS tape in and watch it over and over again. After we heard that [Stephen Sondheim] had passed, I did make my husband sit down and watch the PBS recording. On Amazon Prime though, not on my old VHS tape.”

Some lucky fans may also hold a physical remnant of Sondheim’s genius, as the composer-lyricist was not opposed to replying to fan mail. He received thousands of letters over the span of his career and made an effort to reply to as many as he could. Many of these letters would act as fuel for the next generation of artists.

Sondheim’s legacy does not only lie in his successors, but in his work as well. Although he wrote some of them over sixty years ago, his shows are still being adapted to this day. In fact, recent years have shown new, innovative approaches to Sondheim’s oldest works.

A recent major revival of a Sondheim musical, Company (2018) in the West End, used the score’s versatility to their advantage, swapping the genders of many characters in the show, including the lead, Bobby — now named Bobbie.  Sondheim described the original Company as a “product of its time,” following Bobby as he explored the purpose of man. The adaptation does the same, but Bobbie explores the meaning of femininity in a modern landscape. On December 9th, this rendition of Company opened on Broadway.

In collaboration with composer Leonard Bernstein, Sondheim wrote the lyrics for West Side Story (1957). This work is still being adapted until today: a new rendition of which in film form was released on December 10th of this year. The musical, formerly receiving criticism due to its lack of representation in casting and production, has been reworked to fully embrace Puerto Rican culture instead of mocking it. West Side Story (2021) is now playing in theaters.

Although Stephen Sondheim is no longer with us in the flesh, his works of art remain, and his influence will persist through all that are inspired by him. His legacy and impact on theatre and music cannot be understated.