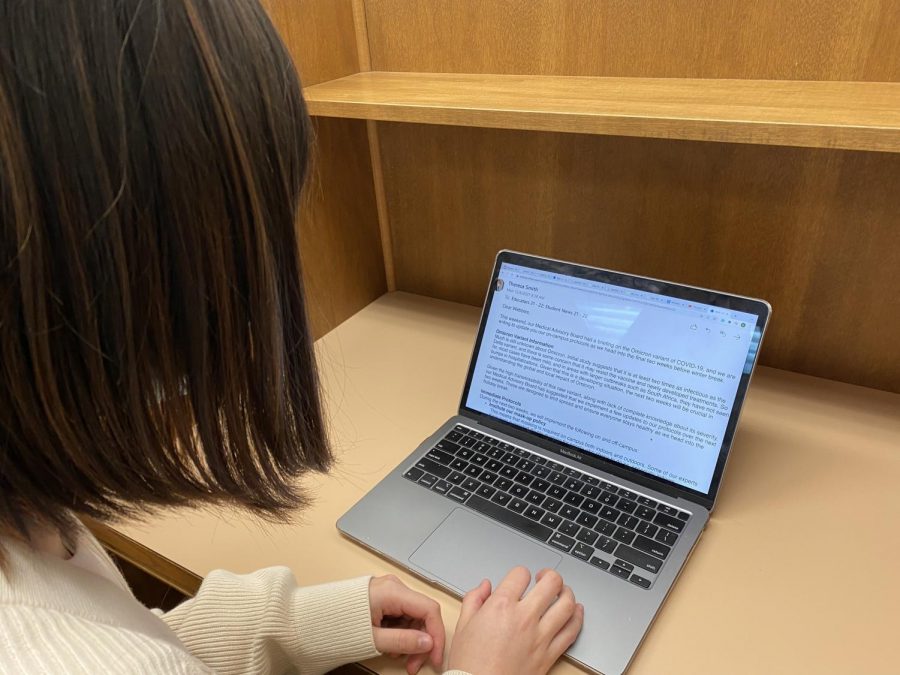 On the morning of December 6th, Webb students received an email from Dr. Theresa Smith, Associate Head of Schools, that addressed the Omicron COVID-19 variant. Dr. Smith informed the community that the Medical Advisory Board had discussed this new virus and decided that additional protocols would be implemented. Masking is once again required both indoors and outdoors and many off-campus trips have been restricted.

It still remains a mystery as to how this variant mutated. Scientists are deliberating whether it came from a singular individual or a group of individuals, humans, or animals.

Many believe that the Omicron variant emerged within a host with a weak immune system, which is a common setting for the formation of mutations. Former official at the California Department of Public Health Charity Dean believes that “this was the result of ongoing molecular evolution inside a single host that spilled over into the population.” Consequently, scientists are concerned with the substantial number of mutations in the variant.

On November 26th, 2021, President Joe Biden announced the travel ban that would prevent non-citizens from Botswana, Eswatini, Lesotho, Malawi, Mozambique, Namibia, South Africa, and Zimbabwe from entering the United States. Any citizen who traveled to these eight countries in the last 14 days is currently not allowed to come back into the U.S.

Dr. Anthony Fauci, the director of the National Institute of Allergy and Infectious Diseases and Biden’s Chief Medical Advisor, stated that the travel ban was being reevaluated every single day.

During a virtual White House briefing, Dr. Fauci announced that there is a lot of gray area in which some information about the Omicron variant is unknown, like its response to vaccines. However, new research is slowly telling us about the transmissibility of the variant and its reaction to vaccines.

Despite these precautions, the first confirmed case of the Omicron variant was found in the U.S. on Wednesday December 1st, specifically, in northern California. Despite being vaccinated, a traveler caught the virus while coming back to San Fransisco on November 22nd, after going on a trip to South Africa. The Centers for Disease Control and Prevention (CDC) reported that all close contacts have come out with negative tests and the person is continuing to stay in isolation despite recovering.

Health officials predict that this new variant is likely to spread more easily than the original virus. At Webb, it’s especially important that we keep this in mind and continue to wear masks when we gather in big groups for chapel, school assemblies, in the dining hall, and other large events.

The COVID-19 vaccination is expected to protect individuals from severe symptoms; however, breakthrough infections can still occur. Scientists are continuing to encourage people to receive their vaccinations, especially with the uprising of the Omicron variant.

The CDC has stated that vaccinations are still the best way to fight against COVID-19 as they significantly slow down the spread of the virus and recommend that people mask in public indoor spaces for protection against all known variants.

Symptoms of the Omicron variant are reported to be very mild, including tiredness and body aches. Symptoms that have been previously found within patients with the original COVID-19 virus, like loss of tase and smell, have not yet been associated with the Omicron variant.

It is evident that the Omicron variant has already begun to impact the Webb community. For the time being, boarding students are no longer allowed to leave campus for Tuesday night dinners or leave campus with a non-guardian or non-faculty member on the weekends.

“I’m disappointed to hear that I can no longer go out with my friends during my free time,” said Angela Du (‘24), who cancelled her plans for this weekend due to the new protocol. “I’m worried that these restrictions will expand, and more things will be shut down.”

Within her email, Dr. Smith also emphasized the importance of reinstating Webb’s mask-up policy, meaning that all members of the community must always wear a mask while on campus, both indoors and outdoors. She also suggests double-masking as an extra precaution.

Despite the concerns that people have for the Omicron variant, Dr. Soumaya Swaminathan, Chief Scientist of the World Health Organization (WHO), recently confirmed that the biggest priority is still the Delta variant, which is currently the most responsible for severe illnesses and deaths.

While it is going to take a while for us to fully understand the Omicron variant of COVID-19, it should be expected that the next two weeks will reveal a lot about the new virus, and eventually give us more answers.