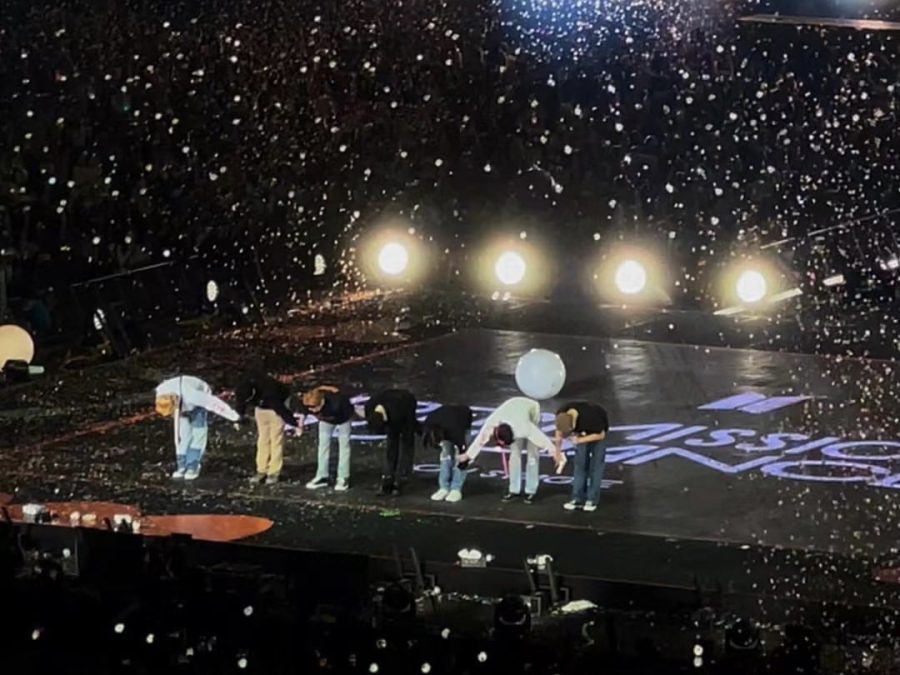 BTS bow to the audience at the end of the “Permission to Dance” concert. Confetti and colorful light sticks make the entire stadium look like a universe filled with joy, optimism, and excitement.

Walking into a concert stadium and immediately immersing yourself within waves upon waves of glowing light sticks in synchronization with the beats of your favorite song. You step onto that roller coaster ride of emotions: from the exhilaration of the upbeats to the soulfulness of every suspended key in the song. Being able to see not only your favorite boyband but also other people from the same fandom, whose energy and excitement matched yours, will surely make your eyes teary after leaving the crowd.

On November 26th, November 27th, December 1st, and December 2nd, BTS made a grand comeback with the “Permission to Dance” tour at the SoFi Stadium after two years of restricted travel due to COVID-19. Since their plans of a world tour unfortunately halted back in 2020, fans could not contain their excitement as they returned to live stage once more.

“I was really excited before because I actually got their last concert’s ticket, but got canceled during my freshman year,” Wendy Chang (‘23) said. “So, I got really excited since I got the chance to watch them in person, which is hard to believe.”

Thousands of people attended each concert, singing and dancing to songs ranging from rap to R&B that provoked fans’ emotions around the world. During the concert, BTS performed songs from both recent comebacks, such as their hit, “Butter,” as well as some earlier works from their album The Most Beautiful Moment in Life: Young Forever, which stirred up the agitated crowd even more with nostalgia.

“At first, I was very happy to see them in person, and they look so good, but then I got really emotional towards the end when they started singing ‘Spring Day,’” Wendy Chang (‘23) said.

BTS concerts are not only famous for their telepathic energy within the crowd through lively dance beats and powerful stage presence, but also the crazy queues for fan merchandise. There were cases when attendees lined up for their seats at 9 a.m. when the concert started at 5 p.m. Under COVID-19, however, the concert management team also enacted measures in response to the ongoing pandemic.

“They said to bring your vaccination card, and I did bring mine, but they did not look at it,” Emily Wang (‘22) said. “But I know that they also have stations where people get tested if they are not fully vaccinated.”

Despite the language barrier, BTS has brought K-pop culture to an international audience. With its popularity, BTS has successfully delivered a valuable message of self-love. From their album series “Love Yourself” to their recent song “Permission to Dance”—its choreography integrating sign language that helps deaf people understand the song’s positive and meaningful message—they encourage others to love themselves. Creating more than just music, BTS has also collaborated with UNICEF since 2017 to host the LOVE YOURSELF Campaign to raise awareness of anti-violence and self-love with #ENDviolence.

“I first liked them because they are good-looking people, their songs are good, and they are great at dancing,” Emily Wang (‘22.) said. “And then later when they came out with music like ‘Spring Day,’ and when they created lyrics and make art that is deep, I feel like that is why I became a fan for so long.”

Although many people who are not fans of BTS may not understand fans’ zeal for a group of K-pop idols, the mutual love shared between BTS and fandom acts as encouragement and motivation for both sides to persevere in doing things they love. The official fandom name for BTS fans, ARMY—an acronym for “Adorable Representative M.C. for Youth”—signifies that the fandom will always be BTS’s strongest source of support.

With all the trust and support that the name ARMY carries, the color purple embedded a profound meaning. During the 3rd Muster – a fan club event—V, the main vocalist, visual, and producer of BTS, initiated the meaning. Purple is the last color in the rainbow, meaning the inevitable trust and love. V said, “I purple you,” which means I will love and trust you until the last day comes.

BTS has especially impacted the lives of many people. The hard work and time they have exerted over the past eight years have inspired many to chase their own dreams, especially high school students. They are constantly moved by the hard work they put into each of their songs, especially by the touching lyrics.