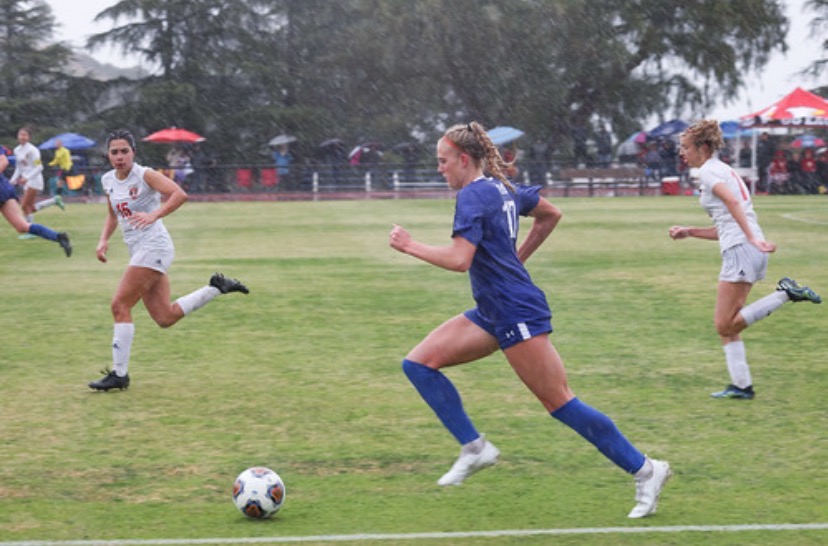 Abbey Cook (‘23) kicks the ball down the field during the rainy state finals game.

During the final four minutes of the intense CIF championship game, Abbey Cook (‘23) spotted the ball on the field, ran up, and delivered a swift kick. This goal secured the team’s ascendance to first place in the championship.

Abbey has always had a habit of scoring multiple goals, ever since she began practicing soccer at the age of four. She began on AYSO (American Youth Soccer Organization) teams when first learning how to kick the ball. Funnily enough, during her first-ever soccer practice, the coach told her to dribble the ball, and she started bouncing the soccer ball like a basketball.

She quickly picked up the sport, though. Her parents noticed that while her teammates would bunch up and all run towards the ball, she would stand by the goal, and wait for the ball to pop loose, so she could get it and score. This is where her mom began to see her athletic talent shine through.

“My mom said, ‘Oh wow, she’s actually really good,’” Abbey said. “My dad said, ‘She’s seven. If she’s still scoring goals by the time she’s seventeen, then maybe we have something special.’ I just kept scoring goals. I still love it just as much as I did twelve years ago.”

Ever since Abbey started playing soccer, she’s dreamed of playing division one in college. There was never a doubt in her mind that she would be achieving this goal. Although Abbey was adamant about her dream, she never faltered in keeping up with strong academics and consistently being high achieving in various areas of school.

During her soccer career at Webb, she earned the position of co-captain of the VWS Varsity team. Coach Malick Mbengue selected her because of her ability to talk to her teammates, and how she acts on and off the field.

“She’s vocal in terms of talking to her teammates [and] talking to me as a coach when she has some feedback,” Coach Mbengue said. “What she does on the field speaks for itself. She leads the team in both assists and goals, and I think that’s the mark of a leader. She embodies the vocal and action leader styles.”

Although Abbey is skilled at scoring goals, most of the time, she will pass the balls to her teammates as opposed to scoring them herself. Coach Mbengue believes that this is a mark of evolution, as she is someone who makes the people around her better, not simply thinking for herself and how many goals she is going to score.

“Next year, she will be continuing her leadership and mentorship,” Coach Mbengue said. “I’m hoping that she is going to use [her time] to mentor the other players, and help them develop, but also enjoy her final year in high school.”

When not playing for Webb, she participates in a club called Arsenal, a competitive organization that allows her to play soccer throughout the year. The main difference between the two is that high school sports are much less intense and leave more room to enjoy the time spent and socializing in practice. Club soccer is much more intensive, where players cannot afford the same luxury of conversing in between drills.

“[Webb soccer] is fun because it’s people you go to school with and hang out with every day,” Abbey said. “You’re playing with your friends.”

Her internal motivation is primarily to continue to get better at every practice, to score more goals, and to keep breaking records. She has a lot of support from her parents, who are constantly proud of the success she has had as a soccer player.

The process of connecting with colleges as an athlete is complicated. Her club team promoted her well, by showing her soccer Instagram (@abbeycook2023) on fliers and posters at showcase events. Abbey would send emails to college coaches with highlights and her game schedule, and if they showed up, she would send another email thanking them, and resend the highlights from before.

Abbey continued emailing schools and coaches, until one day, she received an email from the University of Pennsylvania women’s soccer coach.

“I knew I wanted to go to a school that had good academics, I just didn’t know if academically I could go to an Ivy League school,” Abbey said. “I remember seeing the logo on the email, and thinking, ‘oh wow, this is an Ivy!’, and it was great. I’m so happy I committed to UPenn.”

Abbey’s goals for the future are to help her future university win an Ivy League championship, perhaps with recognition as the Ivy League soccer MVP.

“I’ve always wanted to play division one, so in that aspect, yes, I feel as though I’ve accomplished [my goals], but to an extent, it doesn’t really feel like it,” Abbey said. “I don’t think I’m done. If my life leads me down the path of being able to play professional soccer, that would be cool.”