Is US Soccer’s absence from the World Cup a blessing in disguise? 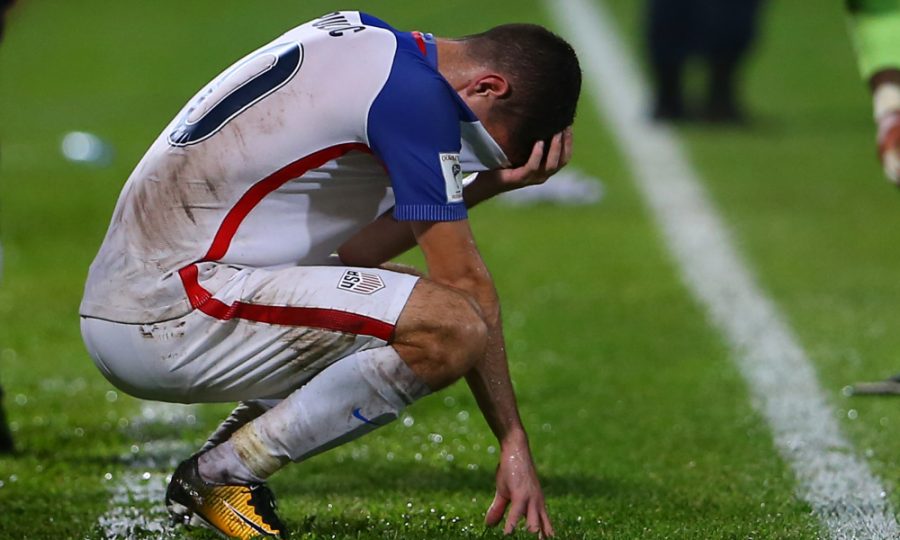 Historic Disappointment: USMNT rising star, Christian Pulisic, displays his disgust as the US misses out on the 2018 World Cup. Graphic courtesy of Getty Images

For the first time since 1986, the United States Men’s National Team (USMNT) failed to qualify for the World Cup. Following a gut-wrenching qualifying stage in October, the USMNT was officially eliminated from World Cup contention, meaning that US Soccer would have to make some major structural changes in the organization, including management and players.

In the darkest days of the USMNT’s history, there are some slight slivers of light. Going forward, United States National Team President, Sunil Gulati, has a tough road ahead of him that will involve an emphatic shift in coaching, playing style, and most importantly, the players that will be on the rosters heading into the 2022 World Cup.

After defeating Panama 4-0 on October 6, the USMNT was destined to be one of the three Confederation of North, Central American and Caribbean Association Football (CONCACAF) teams to qualify for the 2018 World Cup in Russia. Following the victory against Panama, ESPN’s Statistics and Information Department determined that the United States had a 93% chance of advancing to Russia. There was only one result that would destroy the USMNT’s hopes of making their eighth straight World Cup. The USMNT would have to lose against Trinidad & Tobago, Panama would have to tie or defeat Costa Rica, and Honduras would have to beat Mexico.

Of course, USMNT fans were confident in their team’s ability to advance to the World Cup, even if they were to drop the game against Trinidad and Tobago. Mexico and Costa Rica were positioned first and second, respectively, and had already punched their tickets to Russia. Just when everybody got comfortable with the USMNT’s position in the CONCACAF standings, everything began to spiral out of control.

The first half of the USA/Trinidad and Tobago could not have gone any worse for the Americans. Right out of the gate, Trinidad and Tobago capitalized on an own goal by American defender, Omar Gonzalez, taking a 1-0 lead in the 17th minute. Twenty minutes later, Alvin Jones scored another goal for Trinidad & Tobago, increasing the scoring margin by two. In the second half, the US began to assert their dominance early on. Teenage superstar Christian Pulisic scored in the ‘47 minute, leaving 43 minutes for the United States to take the lead or even up the score. After 43 minutes of heart-stopping action, the USMNT failed to score.

Ryan Place (‘18), a student at Webb and fan of the USMNT said, “I saw it on Twitter and I refreshed the page a solid four times to make sure it was real.” Place went on to criticize the national team for their lackluster play. “It was really embarrassing obviously because at that point they had less than 10% chance of not making the World Cup. After they lost the game they were making excuses like “the field was too wet to play,” and I just was really disappointed.

While the USA/Trinidad and Tobago game were in action, Panama defeated Costa Rica with an 88th-minute goal by Romån Torres. Simultaneously, Honduras earned a 3-2 victory while positioning themselves in the fourth spot in the final CONCACAF standings.

On October 10th, there was a 7% chance that the stars would align in a negative way, leaving the USMNT out of the 2018 World Cup. That 7% of the USMNT missing the World Cup turned into 100% after everything was said and done.

Missing the 2018 World Cup means that fans might never see players like Jozy Altidore, Tim Howard, DaMarcus Beasley, or Clint Dempsey in another World Cup. Along with Landon Donovan, these players were credited with creating the best years of US Soccer. This era saw three straight World Cup appearances, two round of 16 appearances, and four Gold Cup championships, creating an interest in soccer that Americans had never seen before. Fans understand the impact that the veterans made in the state and perception of US Soccer, but many agree that a change needs to be made.

Eddie Moreira (‘19) spoke on the topic at hand, saying, “In contrast, I feel like the veteran players are putting a shadow over the young guys in a sense that most of the older guys are taking advantage of the spotlight, and more young players should be implemented.”

Now that the USMNT won’t be participating in the 2018 World Cup, it is time to focus on the number one issue at hand: the transition from the older generation to the newer generation of US Soccer.

USMNT fans got a glimpse of the team’s future when interim coach Dave Sarachan included up-and-coming players Weston Mckennie, Tyler Adams, Cameron Carter-Vickers, Lynden Gooch, and Ethan Horvath in a friendly game against Portugal. Mckennie earned his first cap with the senior team, scoring his first goal in the ‘21 minute. Adams and Horvath each earned spots in the starting 11. Carter-Vickers and Gooch both entered the game in the ‘46 and ‘59 minute, respectively. Ending in a 1-1 draw, the youth of the national team showed that they have the skill to play against some of the best European players in the sport.

As the national team advances to the next stage of its road to the 2022 World Cup, the newest additions to the squad will become a more vital part of the organization. Established young players like Christian Pulisic, Kellyn Acosta, Bobby Wood, Darlington Nagbe, Deandre Yedlin, and Paul Arriola will eventually be handed the reigns on the pitch, while Tim Weah, Josh Sargent, Haji Wright, and the individuals who participated in the Portugal Friendly, will round out the new generation of US soccer players.

The boost in the development of American players on the soccer field can be credited to European clubs willing to take more chances with American players. Christian Pulisic, the USMNT’s 19-year-old shining star, began his professional career with Borussia Dortmund last year when he was called up from the youth team, which he joined in 2015. Pulisic is now setting a new standard for youth American players with his play for one of Germany’s top teams. Weston Mckennie, Cameron Carter-Vickers, Shaquell Moore, Lynden Gooch, Josh Sargent, and Ethan Horvath are just a few of the US youths that are apart of an elite class of players in Europe. Soon, the USMNT’s youth will be on the map, as they continue to improve under the best training the world has to offer.

Now, is anyone really happy that the USMNT missed out on the 2018 World Cup? No. Are a lot of USMNT fans already looking ahead to the 2022 World Cup? No. When your country has participated in the last seven World Cups, fans forget what it feels like to be on the outside looking in. It is a tough pill to swallow for sure, but optimism is the only medication to cure the disappointment of being left out of the soccer’s most prestigious tournament. There are plenty of question marks still surrounding the organization, as well.

Who will have the responsibility of coaching the team moving forward?
Will there be a change in management?
Will Clint Dempsey, Michael Bradley, and some of the other US Soccer veterans be included in the squad moving forward?

It will take time for fans to discover the answers. Thankfully, the sharp increase in youth talent will propel the national team to new heights.