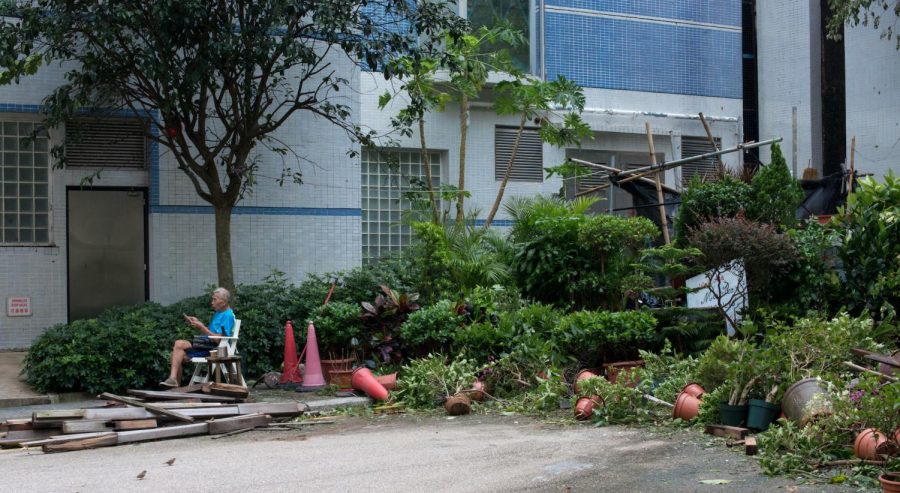 Trees and other objects have toppled onto residential roads in Hong Kong. Graphic courtesy of Dan Hsu

Just one day before Typhoon Mangkhut, citizens of Hong Kong enjoyed the calm before the storm and slowly taped up their windows to prepare. On Sunday, September 16th, the Hong Kong Observatory (HKO) declared Typhoon Mangkhut a T10, the highest storm signal possible. That evening, the typhoon hit with heavy rain and winds going up to 107 miles per hour.

Karin Watanabe, a student at Hong Kong International School (HKIS), was home that night. After years of living in Hong Kong, she had never experienced anything like this typhoon before and even had school cancelled two days in a row for the first time in all of her years at HKIS.

She said, “When the typhoon hit, water started leaking from the ceilings and windows and the wind was so strong. Things were flying everywhere! Lots of trees fell down and their branches got caught in windows. One actually hit my window. There was a crack, so water started flowing in from there too and when I looked out I could see shattered windows on the ground.”

The typhoon toppled traditional bamboo scaffolding from high-rises, and knocked down dozens of trees onto busy city streets. It even demolished historical landmarks such as Central’s Duddell Street steps, which were built during the late 1800s. Yachts and junk boats were destroyed and washed onto shore after the storm. Hong Kong’s famously efficient public transportation system briefly shut down, resulting in millions of citizens missing work. South China Morning Post estimates that the total cost of repair from Typhoon Mangkhut could exceed one billion US dollars.

Hong Kong and Macau native Adrian Leong (‘19) talked about his family’s situation and the damage near his home. He said, “My family was greatly affected while witnessing roads fall apart and windows cracking. It caused great distress for all members including myself in concern of their safety. It is truly a scary event, as nothing has ever happened like this in my lifetime.”

Wing Chow (‘19), also from Hong Kong, was not as worried about his family, but was still concerned about others in more dangerous locations. He said, “School was cancelled for my sister and my father had to work from home. I have never seen anything that bad, but I was sure that my family would be safe because there are buildings all around us and we don’t live near the ocean.”

On September 18th, 2018, Typhoon Mangkhut vacated Hong Kong, schools resumed, and major roads were cleared to ensure that citizens could find some way to work. Hong Kong will be recovering for quite some time, but its remarkable construction system will surely repair the damages as quickly as possible.