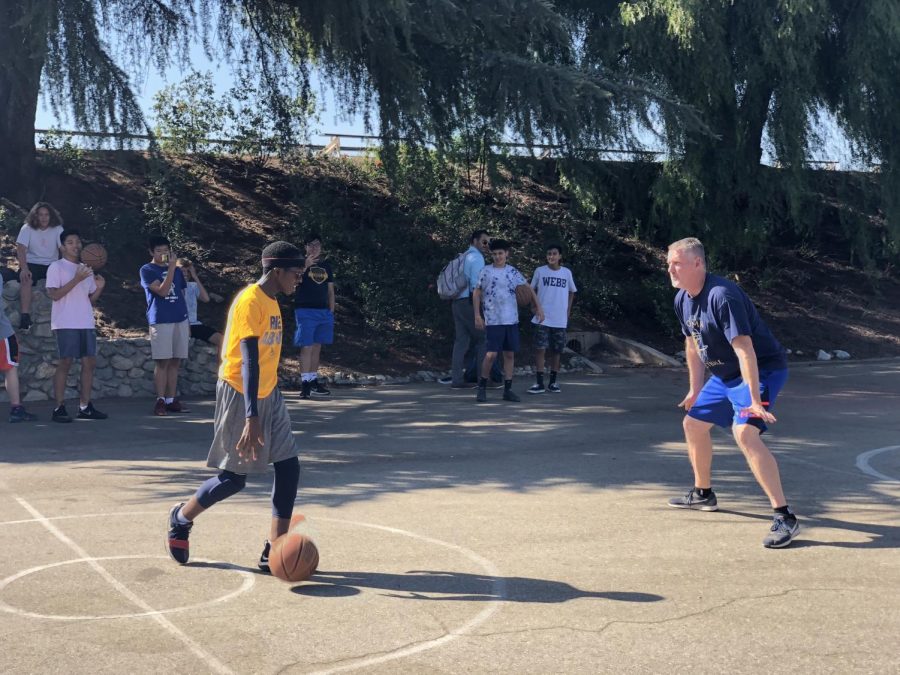 Jaydyn Akpengbe (‘22) mentally plans how he is going to maneuver around Mr. Duque.

On Monday, September 24th, Jaydyn Akpengbe (‘22) challenged the head coach of the WSC varsity basketball squad, Rick Duque, to a friendly one-on-one for the unofficial title of ‘Best Basketball Player at Webb.’ At 3:00 p.m., a twenty-six person crowd huddled around the outdoor basketball court to film, cheer, and laugh as Mr. Duque dominated the game with a final score of 21-5.

The crowd of adolescent teenage boys roared with invigorating energy, fueling Jaydyn’s determination to hustle even harder. Before the scrimmage, the freshman boys spammed STAS with announcements of the competition to attract more fans to the scene.

Mr. Duque said, “Jaydyn came up to me personally to ask if we could play one-on-one. I said of course and I am really glad he wants to make himself better. From a coach’s perspective, Jaydyn could work on taking more advantage of his quickness because I’m obviously much bigger and slower than he is.”

Following the game, Jaydyn said, “Mr. Duque is a massive powerhouse. It felt good to play against him. I mean, I was obviously disappointed, but I’ll be playing against him again tomorrow at 2:30, so I hope I can score some more points on him. I’ve spent six to seven years total playing basketball, but I still have a lot of work to do. ”

Bradyn Wishek (‘22), a spectator and classmate of Jaydyn, said, “Watching Jaydyn play against Mr. Duque was short but sweet, and a lot of fun. My friends and I have been egging him on all day. We thought he was going to get completely shut out, so we were impressed and proud that he put up five against Mr. Duque.”

It is admirable that Jaydyn has rebounded from the loss and seeks a rematch. Besides the massive height and size differences, Mr. Duque also brings decades more of experience both playing basketball and at the stats table for the San Antonio Spurs. In the future, Jaydyn should use his quickness to beat bigger defenders to the basket.

Jaydyn may have been dominated by Mr. Duque on the court, but he has loads of potential and four years left of high school basketball to nurture his technical skills and accumulate experience. Maybe, three years from now, Jaydyn will be the one towering over Mr. Duque. After all, ‘you gotta play the best to be the best!’