Honor the Blue and Gold 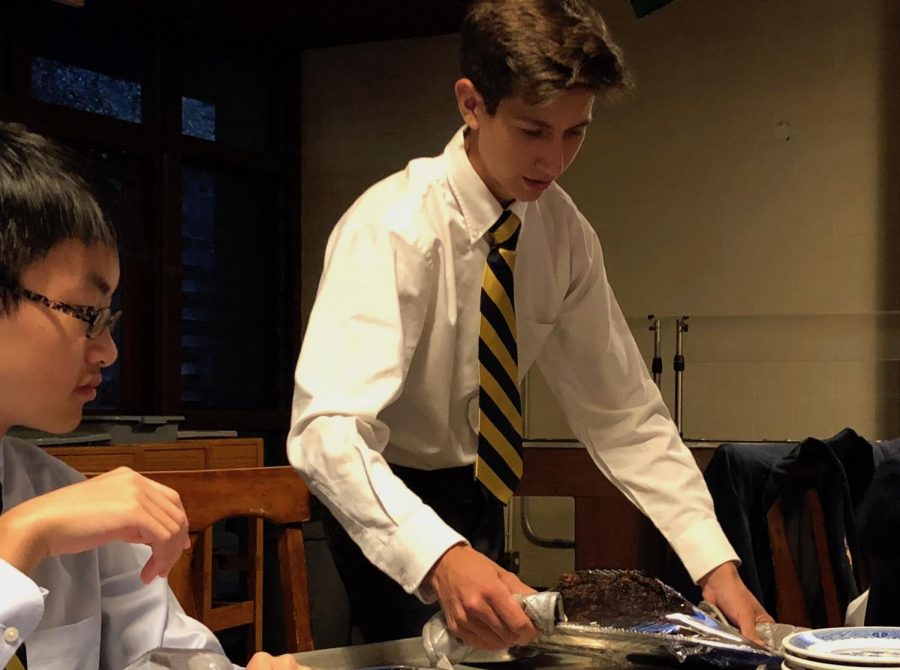 Michael Martinez ('21) enjoys the dinner after the Honor Pledge.

The Honor Pledge ceremony took place at the Vivian Webb Chapel this year on the evening of September 24th. This ceremony offers WSC students a moment to sign the Honor Pledge. A dinner in the dining hall followed the ceremony; the entire event lasted about two hours.

Javier Valera, an Honors Spanish teacher at Webb, said, “The Honor Pledge is a wonderful opportunity for the students to consider the concept of honor in their lives. Education on honor is more important than anything else. If a person is honorable the rest is easy, and they could take honor and use it for the rest of their lives. This gives us a huge advantage compared to other kinds of education.”

The entire WSC participates in a ceremony conducted by Ben Farrell and the Honor Committee, which is advised by Tom Jurczak. Jonathan Becher (‘20), a member of the HC, said, “In my opinion, the role of the HC is more like a group of peers that represent the students than a police force. While other schools have systems where the deans can simply make a decision, our deans have discussions with the HC members to really take the best course of action to help the students involved instead of simply the easiest.”

I will never bring disgrace on this my school, on myself, or on my friends

By an act of dishonesty or cowardice.

I will fight for the ideals and sacred things of the school both alone and with many.

Or set them at naught.

I will strive increasingly to quicken my comrades’ sense of civic duty.

Thus in all ways will I transmit this school, not only not less but greater

And more beautiful than it was transmitted to me.

The Honor Pledge is not a legally binding contract that forces students to act in a certain way, nor does it declare that those who choose to sign are above those who do not.

Mo Igabaria (‘20) said, “The Honor Pledge has a student hold themselves to a higher standard which, in turn, improves the community.”

Dean Woelfle (‘21) said, “The reason I don’t want to sign is that I’m not ready to make the commitment, and if I’m not going to be the most honorable person I can be it defeats the purpose.”

The Honor Pledge is not forced upon WSC students–it is a choice. That choice is something students may decide to follow up on immediately, or they may choose to wait until their senior year to sign. The WSC ceremony is limited to Sophomores, Juniors, and Seniors. The Freshmen are still asked to attend the event, even though they do not sign until sophomore year.

Santiago Noblin (‘21) said, “I felt inspired and I realize that I must sign the pledge next year.”

Dean Farrell said, “One of the major concerns in the past was if they sign, many are afraid that when they are punished it will be very harsh when they get in trouble, but never once has there been a problem. However, some people just do not want to sign.”

The Vivian Webb School has a ceremony at the beginning of the year called the Signing In Ceremony and all new students are asked to sign but it is not like the honor pledge.

The Pledge is a major moment in a Webb student’s career. If someone chooses not to sign, it is a moment for him to reflect on who he is as a person. He may choose to follow his own code of ethics, and that is perfectly acceptable. The fact that WSC allows the students not to sign is great because it allows students to decide when they feel ready to sign. Honor has been a value that was ingrained into the Webb Schools’ history. The role of honor at Webb is to remind students to hold themselves accountable for their own actions to the Pledge.