Webb robotics gears up for a fresh season 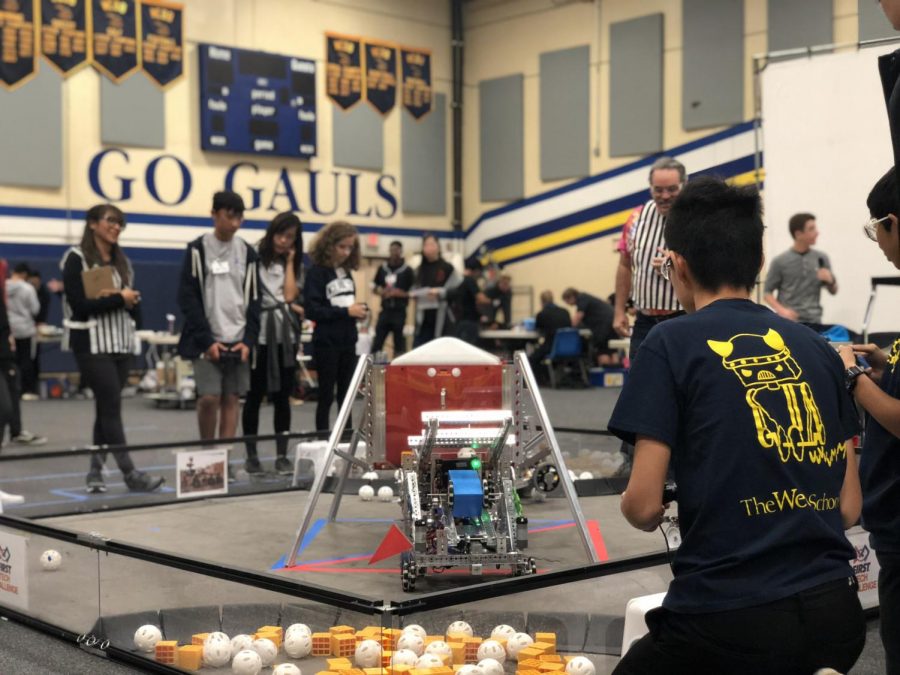 Driver Jimmy Feng ('21) controls the robot during a 150-second challenge.

On November 10th, Webb hosted the first robotics competition of the season as part of the official FIRST Tech Challenge. The Gaulbots and WEBB.exe teams represented Webb battling in two-on-two alliance faceoffs to determine which school’s robot could claim dominance. Robots competed in a wide range of 150-second tasks, ranging from launching plastic balls into baskets to specialized image recognition.

Lawrence Mao (‘19), captain of the Gaulbots team, said, “Considering the current mechanical status of our robot, I feel we performed well on Saturday. However, if we want to make it to later rounds, especially world championships, we will have to step up our game in terms of our robot’s functionality and programming. I think we have a lot of potential this year and we have a good shot at making it to worlds again.”

Webb winter season robotics enthusiasts toiled from 2:15 p.m. to 11 p.m. on Friday night to prepare and set up for the following morning’s tournament. At 6:00 a.m. the next day, several members of the robotics team gathered in the Chandler lab to make final touches on their robots.

The entire team trekked up the hill to the Les Perry Gymnasium at 7:30 a.m. to battle against twelve other teams from the cities of Claremont, Walnut, Hacienda Heights, Pomona, Chino Hills, La Verne, Upland, and Loma Linda.

While Webb participated in the Houston FIRST World Championships last year, the team lost a handful of extremely talented graduating seniors who specialized in the mechanics field. At noon, officials announced the finalized results of the tournament: the Gaulbots came in 11th, while WEBB.exe finished 13th.

Andrew Hamilton, assistant coach of the robotics program, said, “I think the Webb robotics team knows that the results were a little bit disappointing, but they did an amazing job getting the event ready the night before. The students really assembled everything; they put the tables together and got the mats set up. Although Webb placed 11th and 13th, the robots were better than the results suggest.”

Isabella Shi (‘21) said, “This is my fourth season on the robotics team here at Webb, and my favorite part is definitely learning through hands-on experiences. I spent the first two seasons focusing on coding, but didn’t really like it so I easily switched to mechanics. I have really found a passion for this engineering-based field of robotics because more experienced team members are teaching me new skills every day.”

Webb robotics offers opportunities for students to join the afternoon activity group in the fall and winter seasons. From programming to hands-on mechanics, robotics offers a place for everyone.