The history between the Rockets and the Lakers 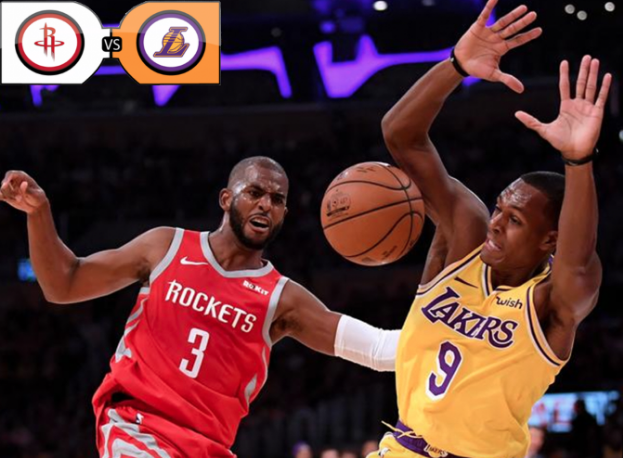 Houston guard Chris Paul (left) and Lakers guard Rajon Rondo (right) bump into one another prior to their fight. Graphic courtesy of Sam Annunziato ('19).

The Rockets-Lakers rivalry is one that goes well beyond their recent brawl in Staples Center during the Lakers home opener. The teams have met eight times in the playoffs (Lakers 6-2) and are likely to face off again during this season’s playoffs. As their rosters are currently constructed, both teams are each other’s biggest obstacle besides Golden State. In their history, there have been three brawls between the teams with some interesting backstory.

The first fight between the two is likely the most notorious standoff in NBA history, second to the Malice at the Palace. On December 9th, 1977, four-time all-star Rudy Tomjanovich approached a brawl to defend his teammate from Lakers center Kareem Abdul-Jabbar. When running into the brawl, Lakers forward Kermit Washington stepped in front of Tomjanovich and landed a punch to his face knocking him back onto his head into a pool of his own blood.

According to doctors, witnesses, and Tomjanovich himself, the hit was so powerful, “Tomjanovich … almost died that night of injuries that were akin to being thrown from a car going 50 miles per hour. His skull was dislocated and spinal fluid was leaking from his brain. He recalled being able to taste the fluid in his mouth.”

Following the punch, the NBA needed to address the situation. Although Kermit Washington was an upcoming all-star in Los Angeles, the league’s biggest market, the league was trying to crack down on fighting and had just increased the punishment. Washington was fined $10,000 and suspended for 60 days.

Tomjanovich followed the incident with one last all-star season before retiring. After his retirement, Tomjanovich became the Rockets head coach in the 1992 and won a championship with Hakeem Olajuwon in just his second and third full season as the team’s head coach.

In 2012, the Lakers acquired six-time all-star Dwight Howard to pair alongside 14-time all-star Kobe Bryant. As decorated as the two were combining for 20 all NBA teams, as well as 17 all NBA defensive teams, the duo could not get along and lasted just one season and only won 45 games together. That was not even the entirety of their struggles; they played for three different coaches, while also trying to incorporate ball dominant Steve Nash into the offense. While all of these on-court struggles were occurring, simultaneously Dwight “repeatedly butted heads with incumbent superstar Kobe Bryant” because he did things like “mocked Bryant’s shooting stats behind the former MVP’s back, putting their teammates in a tremendously uncomfortable position.”

So on October 28th, 2014, when the Howard ridded Lakers faced the new-look Rockets the Staples Center crowd booed Dwight when he was announced in the starting line up. When Carlos Boozer missed a putback layup, Kobe Bryant gave his best effort to steal the rebound from Houston center Dwight Howard. While trying to protect the ball, Dwight elbowed Kobe in the face, rekindling a fire that was put out the season prior. The two began jawing at each other; in the midst of the crowd’s cheers Kobe called Dwight “soft” and proceeded to look him in the face and told Dwight to “try” him. The play was followed by referee review and the Staples Center roar which turned into a “Kobe” chant.

On October 20th, the last time the two teams faced off, the rivalry was reinvigorated. With just over four minutes remaining in the fourth quarter, James Harden drove down the lane on a fast break before intentionally bumping into Lakers forward Brandon Ingram and converting a layup. At the time the Rockets were leading the game by one point. When the referee said that Hardens layup wouldn’t count, the Rockets players erupted and obnoxiously screamed their case for the extra point. During the yelling match, frustrated Brandon Ingram got up and shoved James Harden. He then proceeded to stick his face into that of the referee in what seemed to be cursing him out.

The Lakers players rushed to separate Ingram to mitigate his upcoming consequences, but as the cameras panned towards Ingram, an even worse situation broke out. Chris Paul was allegedly spat on by Rajon Rondo, and when Paul confronted him by sticking his fingers in his face, Rondo responded by punching Paul in the face. Ingram ran into the middle of the scrum and threw some punches of his own, before being pulled aside by Rockets forward Carmelo Anthony. Chris Paul was pulled aside by his longtime friend and Lakers star Lebron James.

Lebron stepping in to support his friend who had thrown punches at his teammate and then proceed to put his arm around him was something that sparked a lot of controversy in sports media. The backstory of this event, however, extends well beyond the friendship of Paul and James. Immediately following the game, Paul Pierce, former teammate of both Rajon Rondo and Chris Paul, said he was surprised that it took this long for a fight to break out between the two.

Rondo later released a statement addressing the situation where he provided reasoning as to why he didn’t intentionally spit on Paul. In his statement, he also called Paul a “terrible teammate.”

This game was not the first time the two have gotten at each other though. On November 4th, 2009, after the game had ended between the Hornets and Celtics, Chris Paul was speaking with Celtics forward Paul Pierce. While doing so, Rondo came up to him and spoke into his ear. Paul immediately put his hands up and backed off and the two began jawing at each other. NBA legend Brian Scalabrine and Pierce were able to separate the two, but neither were happy with each other.

On March 17th, 2018, the Pelicans were battling for a playoff spot in one of their last games of the season, and their starting point guard Rajon Rondo was out due to injury. When Pelicans guard E’Twaun Moore drove and scored on Chris Paul, Pelicans head Coach Alvin Gentry stood up and began yelling at the referee because he felt Moore was fouled. As the Rockets inbounded the ball, Rondo stood up and began yelling at Chris earning himself a technical foul. Chris Paul answered back with some words of his own.

Clippers head coach Doc Rivers had the opportunity to coach both point guards in their prime, he commented on the fight saying “they both want to be known as the best point guard, but it’s more than that.” Could it be their similar play styles that draw comparisons between the two that make them predetermined rivals? Chris Paul has been regarded as the better of the two, but it has been close, so much so that the Pelicans offered Paul in a trade with the Celtics a trade involving the Rondo. Beyond their similar play styles, what makes them fit to rival one another can be best phrased in Chauncey Billups words: “the most important thing that makes them alike, they are super super ultra competitive.”