Why are we ignoring climate change? 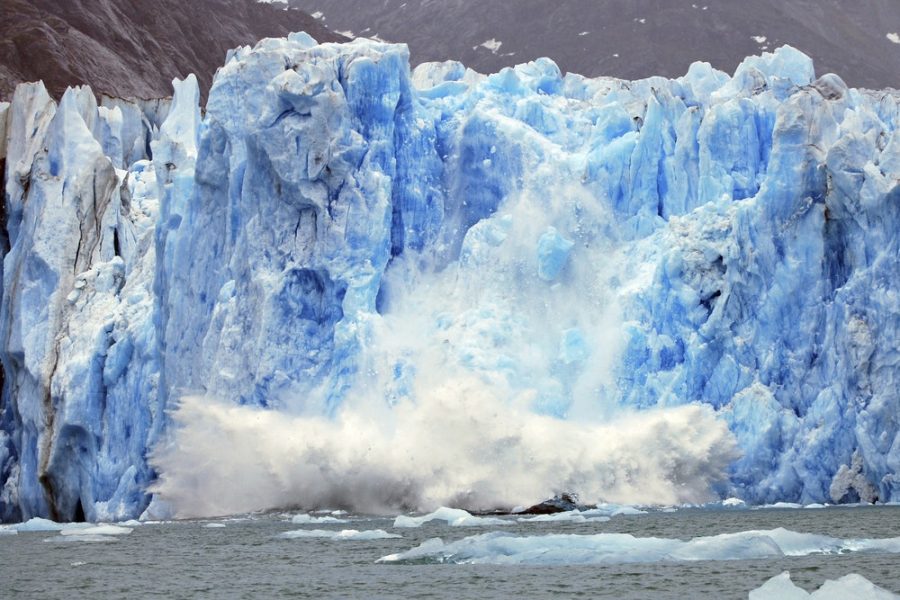 Glaciers are slowly melting into the ocean. Graphic courtesy of Cosmos Magazine

Climate change has affected the world for decades and there have been noticeable differences in weather starting in the 1950s. The United Nations (UN) now claims that we as residents of the world only have 12 years to reverse the effects.

For decades now, many nations have tried to combat the effects of climate change by inventing and using electric vehicles, cleaner energy, and recycling. However, not everyone is convinced about the idea of climate change. Donald J. Trump chooses not to believe in a changing climate. However, Trump will not be able to ignore its devastating implications for much longer.

Trump’s decision to disregard climate change, along with his choice to pull the U.S. out of the Paris Agreement, a conference to discuss solutions for climate change, have halted the amount of work being done to create clean energy. According to a recent report by the Institute of International and European Affairs, banks have started investing more in coal rather than clean energy.

The Intergovernmental Panel on Climate Change (IPCC) states that climate change will continue to affect the whole world. The IPCC, like the Paris Agreement, suggests keeping the temperature increase in the world between 1.5 and 2 degrees Celsius. Unfortunately, as long as written suggestions are ignored, natural disasters will only intensify in regards to their strength and destruction.

The report additionally states that one of the major effects would be oceans rising. Along with this impact, this report predicts a 14% increase in heat waves throughout the world, and heat waves only increase the warmer the planet gets which in turn causes more heat-related deaths.

Another anticipated result of climate change is fires in the Arctic. These effects would occur at a 1.5ºC increase of temperature. At 2ºC, the ice sheets will melt, the temperature spike not only causing deaths but the complete destruction of the coral reefs.

If the Earth cooled by 1ºC, the result would be a healthier place to live, as well as an increase in food production. Economies affected by climate change would heal and begin to prosper again. Areas such as the US experience these effects; for example, if the temperature rises above 84 degrees in certain parts of the US the price of soybeans goes up. As the UN has said, we have 12 years to deal with climate change.

Trump’s own administration released an important climate change report and how each portion of the country will be affected. However, the results were unexpected.

There seemed to be no opposition to the research that the team did quite possibly because the administration knew the problems that would occur if the researcher were not allowed to report the proper findings. However, the report was released the day after Thanksgiving, quite possibly to minimize the attention it would receive.

This report could further influence President Trump’s stance on climate change because of the experts’ findings. Much of what the team reported contradicts Trump’s past position on climate change. The report predicts that there would be an increase of wildfires in California, crops dying in the Midwest, and even failure of the South’s infrastructure. This report also includes a ten percent loss of the US economy.

Countries such as China have been affected greatly by climate change. Jiang Kejun of China’s semi-governmental Energy Research Institute said, “People in Beijing have never experienced so many hot days as this summer. It’s made them talk more about climate change.”

Jiang also said that, regardless of what the US does, countries in Europe and China will take the lead in climate change.

The world will move on with or without the United States, so it is important that Mr. Trump looks closely and carefully at the facts that his own administration gave him, and support climate change.

Words alone will not stop him though. At a recent panel hosted by the UN, President Trump’s international energy and climate adviser, Wells Griffith, said that the US will continue to burn fossil fuels and try to use technologies that limit the amount of CO2 produced from the fossil fuels.

When dealing with upset protesters, Griffith said, “The United States has an abundance of natural resources and is not going to keep them in the ground. We strongly believe that no country should have to sacrifice their economic prosperity or energy security in pursuit of environmental sustainability.”

So the president has decided to harm the country, regardless of the reports his own administration gives him, just for the sake of staying economically stable while the country’s ecosystems die.

To make matters worse, because of the President’s unchanging stance, many other countries have begun to pull out of climate deals, such as Brazil–a country which recently elected a new president that eerily resembles Trump’s thinking. Saudi Arabia has sided with the US so that they are able to continue burning fossil fuels.

The more countries that burn fossil fuels, the faster the world’s climate will degrade. There are two choices: either we get the president to understand the severity of what is happening, or there is a drastic change in 2020. But according to the UN, we will only have 12 years left to make changes, and if we fail there is no turning back.