Welcome to the world of CPUs 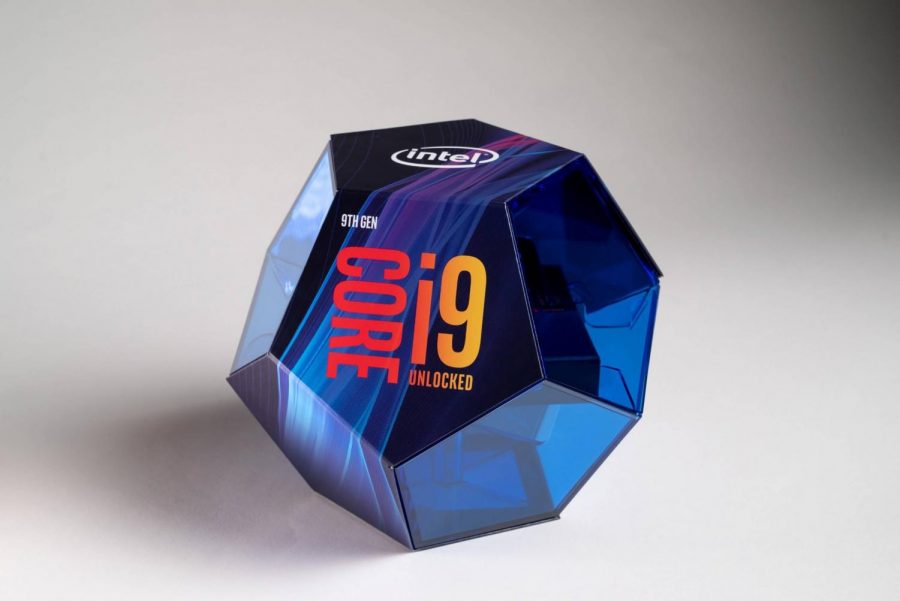 The i9 sits in its pentagonal prism packaging. Graphic courtesy of Tech Spot.

The i9 has been on the market for approximately a year now. The intel core i9 9900k and i7 9700k have recently been released by Intel. Both of these CPUs are fairly advanced and are smart choices when building or buying a PC.

But before the review begins, here is a bit of vocabulary for the readers who do not know much of the world of technology. A core is part of a CPU that receives instructions, so CPUs with more cores are able to receive more instructions to run more efficiently.

Now in relation to CPUs, a thread is a program that helps a computer take the input from hardware, such as mice and keyboards, and translate that into virtual instructions so the mouse moves on the monitor. Multithreading is when multiple threads are used to complete a task.

Gigahertz or GHz refers to the clock speed of a computer which represents a cycle of time; the higher the GHz means a faster computer.

Caching is essentially the computer storing data of what the user is doing and trying to recognize what the user may do next so that the computer can access whatever they may want to do faster. More RAM in a computer allows the computer to have access to a larger map of possibilities, which also allow it to run faster.

All of these little components may not seem too important, but they are what allow computers to do things such as video editing or use complex programs that map the human genome.

The new i7 9700k was released October 2018 and sports 8 cores and 8 threads. This CPU is more than enough for the average person; if you are simply doing homework,  the i7 9700k and i9 9900k is unnecessary. The core i7 starts of at 3.6GHz but can be overclocked to 4.9 GHz. (Quick definition: overclocking is when a computer’s CPU speeds up past its factory presets. It will make the computer faster, but at a risk of heating problems as well as the computer possibly crashing.) The i9 9900k has 8 cores and 16 threads and has clock speeds of 3.6GHz to 5GHz.

I am not able to buy an an i9 9900k and i7 9700k and provide benchmarks because they are too expensive. However, another group has already tested to see the render times as well as the bandwidth and tests of single thread and multi-thread.

The i9 has a Cinebench multithread score of 2048 and the core i7 at 1513 which is a stark contrast in power. In terms of single thread power, cinebench had the results come out to 216 for the core i9 and 214 for the core i7. For this portion of the review, higher is better.

For render times in blender, i9-9900k is much more powerful than the core i7-9700k. The i9 takes 18.4 seconds to render, while the i7 takes a solid 24 seconds. The less time rendering takes, the better because it means video editing can be done faster.

For the PC Mark 10 score, which is essentially how powerful it is for playing video games, the core i9 has a physics score of 20893 and the i7 has a score of 19773. For this portion of the specs, higher would also be better.

There is no doubt that, both of these cores are very powerful compared to other CPUs, but as I said early they typically would not be used by the average consumer. These high-end processors come with a price. The i7-9700k is priced at $385 and the i9-9700k is even more expensive at $539. Sure the core i7-9700k would be the way to go, but if you are someone who does video editing or plays high intensive video games for a living, the core i9 would be the way to go.

But before you go on Amazon and buy it for Christmas, look at the additional costs that you will need to deal with because the core i9 is new. Not only does the core i9 cost upwards of $500, but it requires a new motherboard to be used. The Z390 motherboards are priced at the cheapest $166.24 and the most is the $364.64 Aorus motherboard. There are some pre-built Mac laptops that come with an i9, but there have been performance issues. So currently the best choice would be a Windows laptop, and an example of some of these are the Alienware 17 and the Asus ROG G703.

However, with these new motherboards, it typically would be better to buy one that is in the very middle of the price range. The Aorus may have more bells and whistles, but ultimately you may not use them. Because technology is constantly advancing, it may be better to wait about a year for the prices to drop and then buy yourself the i9 and the new motherboard.

Currently, if someone were to buy this computer they would have to be a madman or a content creator. Only a person who creates YouTube videos or plays graphics intensive video games would need such a monster of CPU and a motherboard, but if you are simply looking to build your first powerful computer or trying to learn, the i7-9700k would be a more desirable choice over a system that would already cost about $600 to $800.

Why? Well because the i7 are better optimized for the current motherboards and technology available to consumers.

However, if you still want to have that extra power of the i9-9900k, keep in mind that there will be a price increase and slightly better performance.

The i9 is better suited for people who use programs that require a large amount of processing power. Streamers, video editors, and animators would most likely want the i9 for the processor boost. This ensures faster rendering times as well as better overall performance.

At this point, picking CPUs to use feels like one is a little kid in a candy store. There are so many good choices, but it all depends on your budget and what you are looking to do with the computer.