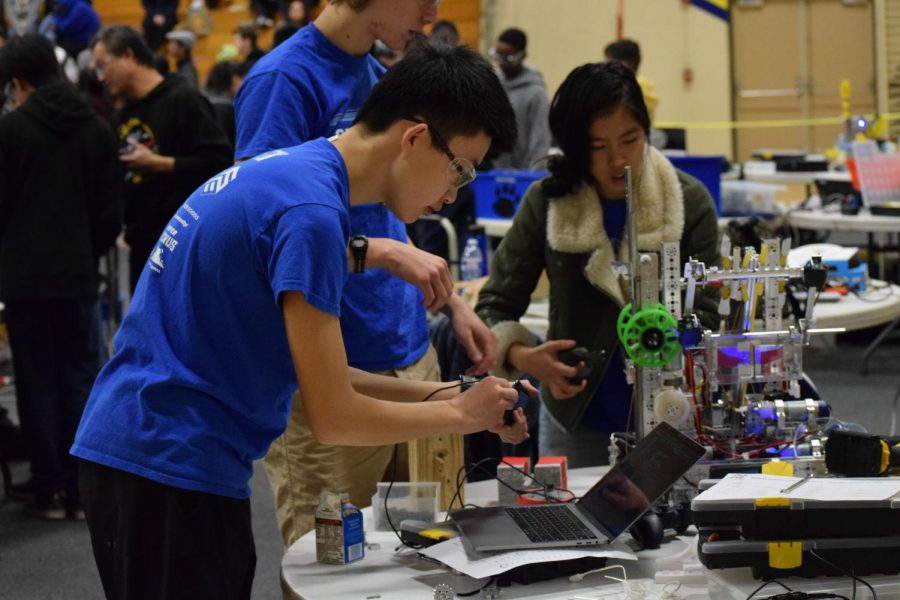 Calvin Xu (‘21) is tweaking the Gaulbots’ robot in between matches. A large part of robotics is trial and error and learning how to rebound from unexpected obstacles. His team of more experienced programmers, mechanics, and drivers placed 3rd out of 13 in this tournament.

While VWS water polo crushed it in the pool on the morning of January 12th, the Gaulbots and Webb.exe gave it their all in the second league meet of the 2018-19 First Tech Challenge season.

Both teams belong to the Los Angeles League E bracket. Although in previous years skill level was distributed equally throughout both teams, this year’s program decided to take an unconventional route. Team 358 Gaulbots is now comprised of more experienced members, while Team 359 Webb.exe is full of the rookies.

Tony Xiong (‘19), the team captain of 359, said, “We had a pretty slow start. For the first two or three games we took last place, but this Saturday we placed 9th out of the 13 total teams, so that was some improvement. Team 359 is slowly picking up pace; members are learning more robotics skills while simultaneously building the robot, which is taking some time.”

Cecilia Li (‘20), a member of team 358 Gaulbots, said, “This tournament turned out to be challenging for all the mechanics and programmers, but the score outcomes went surprisingly well because we were able to fix all the malfunctions right before our matches. For example, during testing at around 7 a.m., we had a drawer slide ‘explosion’ and needed to fix it within thirty minutes.”

Andrew Hamilton, one of two mentors to the robotics program, said, “The teams performed a lot better than last time because for the most part, the robots actually did what they were supposed to do. I think both teams were able to realize what they needed to do to improve from the first league competition, so people walked away pretty happy with their results.”

Will Walker, the other mentor to the robotics program, said, “Both teams have been showing constant improvement from the beginning of the season all the way to our third competition this Saturday. We still have some work to do, but they’re learning and growing with every challenge.”

With five more games left in the season, both teams wield the potential of moving up in inter-league to regionals and possibly worlds. Come support the senior game at 10 a.m. on January 26th in the Les Perry Gymnasium!