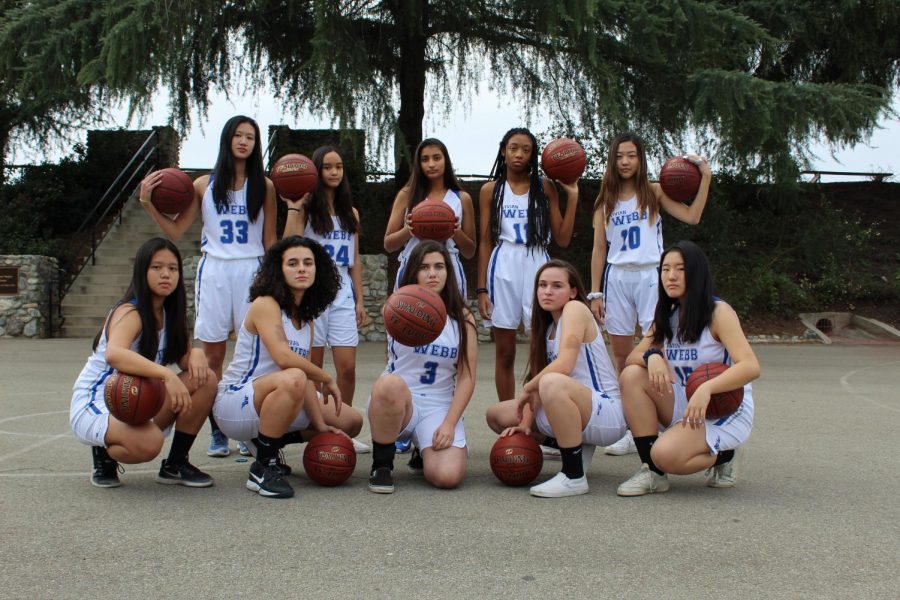 VWS varsity basketball poses in home uniforms for their team picture in the El Espejo yearbook. On the same day, December 14th, 2019, the team stomped over their opponent, Samueli Academy, in their first league game, starting their undefeated streak in league. In addition to winning 65-24, Samueli Academy held the title of league champions in the previous year. Giselle Alrachid (‘20) said, “[The game against Samueli Academy] was a great start off to a fantastic season. The energy was there from the beginning and even though we were ahead we never let up and fought to the end. And this is the mentality we brought with us throughout the season.”

Imagine being part of the team that changes 38 years of history. Until January 29th, 2019, VWS basketball had been the only VWS sports team without a proud, triangular banner hanging overhead in the Les Perry Gymnasium. The Gauls ended their run in league undefeated on January 31th, advancing to CIF. For the first time in history, VWS Basketball are league champions.

Before every game, the team warms up and gathers in the team room for an inspirational speech by Veronnica Alvarado, head VWS varsity basketball coach. She writes goals and inspirations on the board to motivate the players, including guidelines such as “be relentless” and “play for each other.”

As undefeated league champions, the Gauls hold an impressive 8-0 winning record for the 2018-2019 season. The team competes in the Academy League in Division 4A of the Southern Section. In the past three years, the team has ended with 1-7, 2-6, and 2-4 records.

At the end of the 2017-2018 season, where they placed fourth, VWS varsity basketball moved from the San Joaquin League to the Academy League.

Co-captain Andrea Phung (‘20) said, “This year was really different from the others because the team dynamic was a lot better. We trusted each other more and more people were contributing during the games. Also, it helped a lot that we moved down a league. The team has improved so much over the course of the season. We’ve learned to communicate better and have gained confidence in our skills and abilities.”

Amahl Thomas, assistant VWS varsity basketball coach, said, “Making your mark on a school or a program is always a good goal to have… but to be the first to ever do something is historic!”

The undefeated team is led by co-captains Juliana Base (‘19), Andrea Phung (‘20), and Chloe Stewart (‘20). Chloe also upkeeps her place as the league’s leading scorer with a total of 416 points. Another Gaul on this league leaderboard is Marie Blake (‘22), in third place with 221 points. Not only are the Gauls undefeated league champions, but also 10 out of the 20 players Scoring Stat Leaders list belong to the VWS team.

On January 29th, 2019, the last home game took place in the Les Perry Gymnasium. Following tradition, this was Senior Night, which celebrates the graduating players. The team decorated the walls with posters cheering on Juliana, a four-year veteran, and Vanessa Casillas (‘19), a team manager.

Juliana said, “As someone who has been in this program the past four years, I’m extremely happy and honored about being a part of the first team in history to win league undefeated. Since my freshman year this has been something I have really wanted. ”

This year, the team has noticed more teamwork and synchronization between players both on and off the court. Many players had returned from the previous season, and the team jumped into intense and productive practices immediately after the start of the season.

For players on the court, a big part of sports relates to mental strength. In addition to skill, hustle, and aggression, confidence and determination come from the inside. This season, the team reflected their newer and more positive outlook on themselves on the court by showing attitude as soon as they step foot on the court.

Chloe said, “I think in the beginning everyone went in expecting another season of an alright record with a lot of fun, but once they realized what we could do and that we could better than an okay team, they picked up on that and grew into their own confidence.”

This successful season not only garnered attention from supporters around campus, but past players have reached out to congratulate the team.

Past captain Savannah Thomas (‘18) said, “I’m honestly so proud of the VWS team and all the work they’ve done this year. I was able to attend a game earlier in the season, and the changes I saw between this year and last are exponential. Every player on the team has worked so well together, put in so much effort and it shows. I couldn’t be happier to see what’s become of my brilliant team; they deserve all that they’ve worked for and more!”

Coach Ronnie said, “We want to continue the growth of the program by uplifting all our student-athletes on and off the court. As coaches we can only do so much but it’s up to our future team to decide to put in the work to become stronger individually and collectively. We have to be relentless in our pursuit to greatness.”

As the season draws to its end, the team is excited for the following steps, possibly continuing off season for a longer time. This year, they were motivated by the phrase, “Banner Season,” that was hung on the doorframe in the team room. Look out for their next triumph in the 2019-2020 season.