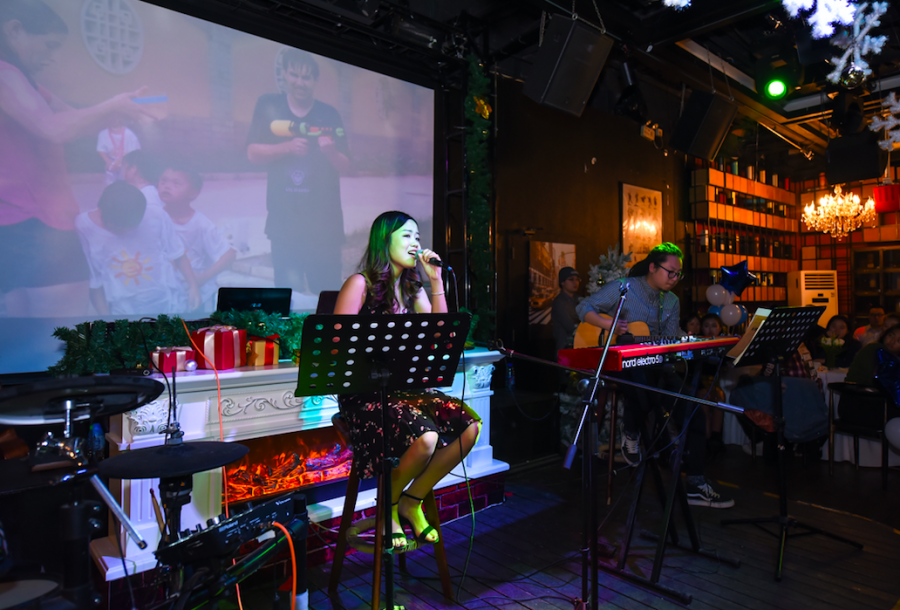 Ashley Fu (‘20) receives flowers from the crowd that attended her concert to celebrate her birthday and give back to Shepherd’s Field Children’s Village. Graphic courtesy of Ashley.

On December 29th, 2018, Ashley celebrated her 18th birthday. Instead of having a party with close friends to celebrate her adulthood, she organized a concert at DKLounge in Beijing, China, inviting people in the community to enjoy a night of live music and charity.

All proceeds from the concert were donated to Shepherd’s Field Children’s Village, an orphanage for disabled children in Tianjin, China, funded by the Temecula-based Philip Hayden Foundation.

The $11,065 helped fund a project called, “Shining Star,” targeted towards sending SFCV therapists to orphanages in all the Chinese provinces to train staff. Her contribution not only helps Shepherd’s Field Children’s Villages, but also all the orphans and provinces that this project reaches.

Ashley began brainstorming ideas for the concert in September 2018 and began planning logistics in November. Tickets were on sale online for supporters to donate and the concert was named, “One Love 18.” As of December 29th, 398 tickets were sold and the event was fully ready.

She said, “I was happy about the change that I could bring to not only Shepherd’s Field, but to the people around me. Not only did I bring more attention to this often neglected community in China, I also learned to be grateful and always give back to this community that I love with the support from family and friends.”

Ashley volunteered and worked as an intern for Shepherd’s Field during the summers of 2017 and 2018, where she met over 60 children. She taught a range of classes, including: crafts, English, Geography, and STEM. In addition, she translated a lot of materials from English to Chinese and vice versa.

Ashley said, “Shepherd’s Field has therapists from different countries and resources from local hospitals, so they could help the orphans receive better healthcare.”

The programme consisted of a performance of 12 songs, short slideshows, speeches, and thank-you’s that spanned over 90 minutes. During the set, Ashley performed eight songs accompanied by a live band, which included some of her closest friends.

Ashley endeavored on this project with altruism and determination. Not only did she have an unforgettable 18th birthday, her contribution will surely make an impact on the mass of people that hear her story and were a part of “One Love 18.”