Swimmers sweep seconds across the board at League Finals 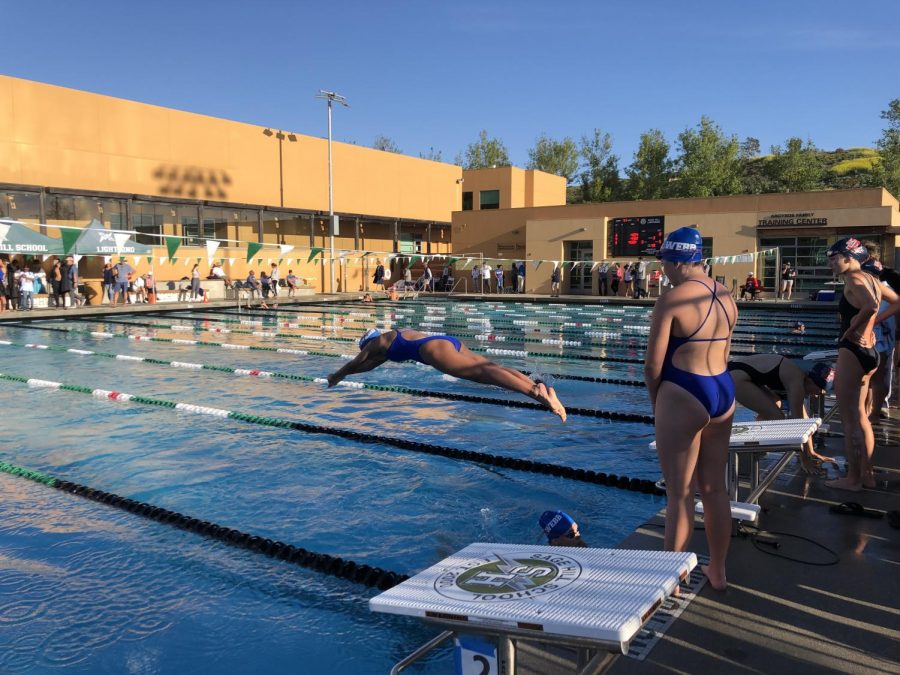 After two weeks of much needed Spring Break downtime, swimmers and divers returned to a jam-packed three days of competition with back-to-back Swim League Prelims, Diving Finals, and Swim League Finals. The JV and varsity squads for both WSC and VWS placed second overall in the San Joaquin League.

Silver was a bittersweet end to the culmination of a season’s worth of hard work, sweat, and tears. A mere four points out of roughly five-hundred separated VWS varsity girls from Sage Hill in the race for League Champions. The tallies came down to the wire at the last event of Swim League Finals, the 400 freestyle relay. Although VWS varsity fell short to Sage Hill by a nail-biting 1.36 seconds, the relay team crushed the existing school record by over 2.5 seconds.

Although she is new to the sport this year, Emma Holliday (‘22) placed second overall in the San Joaquin League for diving. She earned a critical 17 points in the diving portion of the meet towards the VWS overall point totals.

As for individual success, four Webb swimmers were crowned with the title of League Champions in five different races: Andrea Phung (‘20) in the JV girls 50 fly, Kennedy Becher (‘21) in the varsity girls 100 butterfly, co-captain Rylie Brick (‘19) in the varsity girls 100 breaststroke, and Kevin Ren (‘22) in the varsity boys 200 individual medley and 100 breaststroke. Since competition dynamics have shifted immensely this year in transitioning from the Prep League to the San Joaquin League, each of these Webbies now also hold league records in their respective events.

While the swim & dive team may not have clinched gold at League Finals, they earned their place in Webb history smashing five school records at this meet:

Other highlights of the meet include the varsity girls dominating the 200 freestyle relay clocking in with a phenomenal time of 1:42.79, as well as swimmers in all four squads achieving personal bests in their individual races.

Madeline Lilley (‘22), a VWS varsity swimmer who swam in the first-place 200 freestyle relay, said, “I think everyone overall swam really well. Personally, I was surprised that I dropped time in both my 50 and my 100 free even though I didn’t feel like I was in the best shape coming right back from Spring Break. It was sad that we barely lost, but we were all proud because we all did our best.”

Ian Igleheart (‘20), a WSC varsity swimmer, said, “Even though we had League Prelims and Finals right after a two week vacation, the team rallied and finished strong. All of the seniors will be missed next year.”

As the times and record board suggest, Webb experienced arguably the most successful swim season since the mid-2000s. A handful of the VWS and WSC varsity swimmers will continue to train in the mornings and afternoons for the following two weeks in preparation for the CIF southern section (SS) meet in early May.