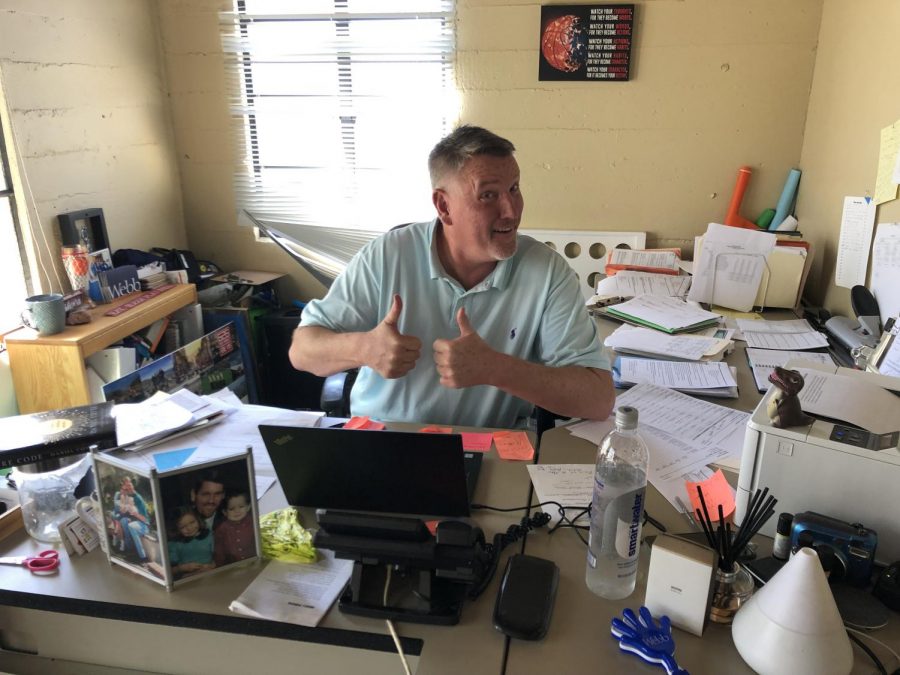 Mr. Rick Duque takes a break from working to pose for a photo.

On March 23rd, 2019, Assistant Head of Schools Dr. Theresa Smith blasted an email to the entire school announcing that current Dean of Campus Life Rick Duque “has agreed to serve as WSC Dean of Students starting in July 2019.” He will succeed the current Dean of WSC, Ben Farrell, who is departing Webb for a new job in Beijing, China.

Before assuming his role as the new Dean of WSC, Mr. Duque served multiple roles at Webb: humanities teacher, varsity boys basketball coach, as well as most recently, Dean of Campus Life, where he helped the community by scheduling weekend activities and coordinating the chapel program.

After Mr. Farrell announced his departure, Mr. Duque quickly made up his mind to apply for this open position. He said, “No one from the administration ‘reached out’ but some faculty members asked, like, ‘are you interested in applying?’ and I will be honest, I was interested in this position.”

Mr. Duque also said, “there were times [the position had been open], but our son and daughter were attending school here, and it’s abnormal already. So I didn’t want to add another layer of weirdness. I want them to have as normal experiences as they could.”

Mr. Duque said, “I mean, I’m going to be the same person I have been, a title is never going to change me. I’m still gonna be outgoing and say hello to people, I actually think that I will extend myself even more and get to know more people. Having tough conversations is really good, it will bring me closer to a lot of people. It’s easier for me to understand their thought process, what they are going through.”

Mr. Duque also elaborated on the behind-the-scene details of the interview process and what it takes to become the Dean of WSC. He said, “I had to go through the interview process, where I had to sat down with faculty for breakfast, interview with multiple faculty members and met with Mr. Stockdale. I also had lunch with some students.”

Dr. Smith was one of the leaders of the committee who interviewed Mr. Duque. She said, “We believe he is the right person for this position… He has lots of ideas of what high school boys need. He might not play as many video games, but he can play basketball with them, that’s the same type of connection.”

Dr. Smith also said, “I believe that some core values of WSC will never change, but Mr. Duque will certainly bring new and different ideas into the community. I think Mr. Duque is ready to play his new role and I’m really excited about it.”