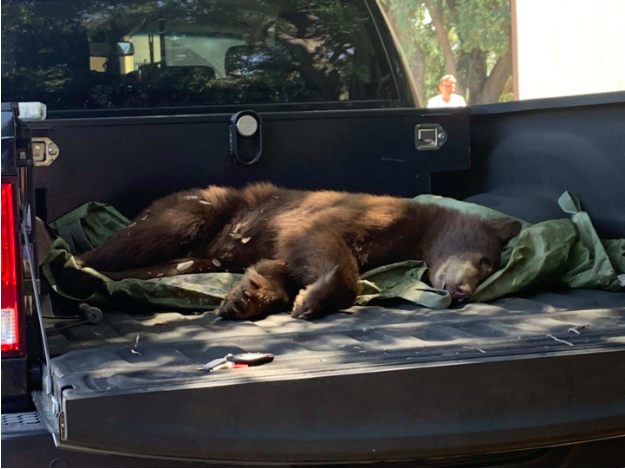 After being tranquilized by the California Fish & Game Department, the bear lies peacefully in the back of the warden’s truck. He would soon be relocated twenty miles away from The Webb Schools.

You are walking back to your dorm during lunch, and you spot a large, brown bear roaming the hallways of Alamo. What do you do? Webb students were faced with this decision on the afternoon of August 28, as a young brown bear intruded upon Webb’s campus, foraging for food and napping in Iverson Park.

Although there have been other bears on Webb’s campus before, according to Dr. Theresa Smith, Assistant Head of Schools, this particular bear was overly persistent. In cases such as this one, the school is forced to call the California Fish & Game Department, as they have wardens who are expertly trained in dealing with the preservation and relocation of wildlife.

The issue could have been dangerous for both the bear and the students, but–thanks to Janet Peddy, Director of Finance, Planning, and Operations–everything remained under control.

Ms. Peddy said, “I believe giving people truthful information is always best to maintain a calm environment. I was concerned about the students reacting to the warden carrying a rifle and wanted to make sure they knew what was going on.”

However, despite being faced with an unpredictable wildlife situation, students did not seem to be anywhere near panic mode. Many Webbies, including Fiona Jiang (‘22), took videos or pictures of the bear and posted them on their social media accounts.

The Webb Student Handbook suggests that, “If you come into contact with a large animal such as a black bear or mountain lion and feel threatened, do not run. You may trigger the animal’s instinct to chase you.”

Dr. Smith released an official announcement covering the bear situation at 3 p.m. on the 28th, when she sent out a blast titled “Bear Update” to all Webbies on Student News. She constructed a concise yet comprehensive email.

Dr. Smith said, “I wanted to try my best to be informative to our student body since the majority is concerned about the bear’s safety.”

Steve Hutzell, the head of Webb’s security team, said, “The bears are attracted to food odors and have an extraordinary sense of smell. The school has taken great strides in bear-proofing the campus. Measures include bear-proof containers, food waste recycling programs at the dining hall and purchasing a trash truck that allows us to remove food waste daily. Students can help by picking up their food trash and putting it into appropriate containers.”

The bear’s well-being was important throughout the process, as the California Fish & Game Department wanted to make sure he was safely relocated 20 miles away from the campus. Ms. Peddy believes the bear may be back within the next few days since bears are territorial animals.

It is crucial that our community continues to follow bear-proof protocols to limit interactions with wildlife on campus. This plan includes picking up trash, ensuring it is in a bear-proof trash can, and leaving doors closed.