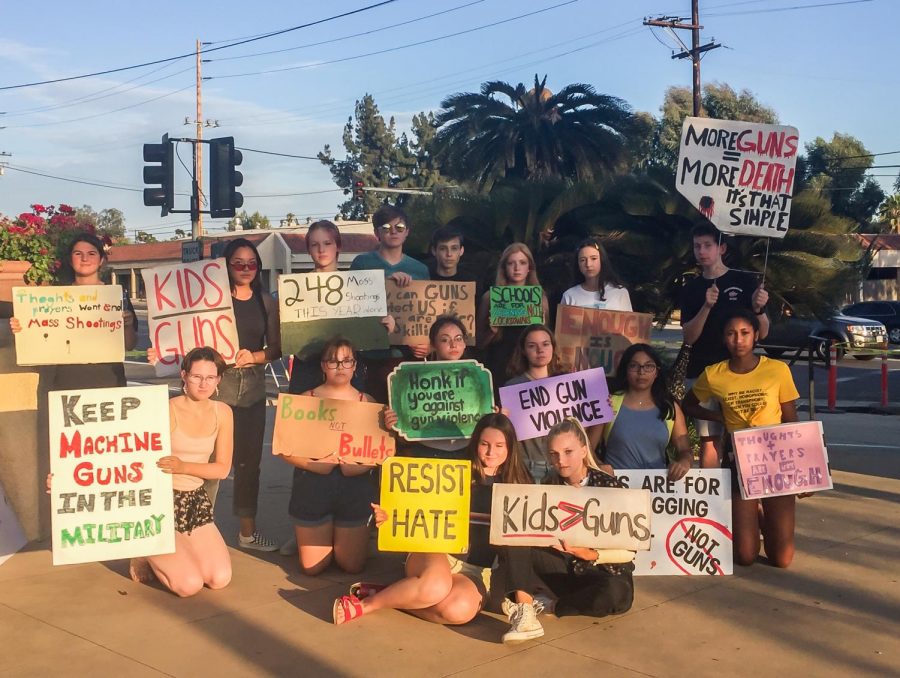 Lily Miller (‘21) and a group of 15 other high school students pose on the corner of Indian Hill and Foothill Blvd. holding their colorful signs against gun violence.

If you are looking for something impactful to do on a Friday night, join Lily Miller (‘21) in her fight against gun violence with her youth organization: Project Disarm Hate.

In the wake of the El Paso mass shooting this August, Lily decided that she was going to take action in her community against gun violence. She joined forces with Maya Garcia (‘21), a friend from Claremont High School (CHS), to organize youth anti-gun violence protests on the corner of Indian Hill and Foothill Blvd. Lily described this central location as the “Mecca” of Claremont, a hub of social change and activism.

Lily hopes that Project Disarm Hate can help spread awareness against gun violence and bring together a group of passionate high school student activists. What started as two girls standing on a street corner has since then evolved into a group of more than 20 people with an even larger online presence.

Gun violence tragically took the lives of more than 53 Americans just this August. There have been over 38 mass shootings in America with three or more fatalities in 2019.

Project Disarm Hate has a growing presence on Instagram with 551 followers as of September 11, 2019. Their posts range from world news regarding gun violence to the logistics of when and where they are holding protests around Claremont. Their Instagram username is @claremont_disarm_hate.

In order to bring her activism to Webb, Lily founded Project Disarm Hate Club, one of 41 new clubs this year. Her initiative encourages Webbies of all grade levels to volunteer, protest, and fundraise towards anti-gun violence organizations. This year, the group’s main focus is to create posters and participate in off-campus protests.

Lily said, “A lot of people at Webb are very encouraging and supportive of Project Disarm Hate. They follow the Instagram and spread the word about it. They post it on their own Snapchat stories and stuff like that. I’ve gotten a few negative responses, of course, from people in opposition, but I try my best to remain calm. I feel that we need to open the conversation, and that’s exactly what I am trying to do.”

Kennedy Becher (‘21), Project Disarm Hate Club secretary, said, “Gun violence is a prominent issue in America. The right to bear arms is a constitutional amendment and part of our nation’s foundation, but I believe there should be more regulation in purchasing such weaponry as gun violence becomes more common and many lives have been lost to it.”

Santiago Noblin (‘21) said, “I think what Lily is doing is a bold thing to do because gun violence is a topic a lot of people don’t talk about on the day-to-day. Especially at our age, people don’t concern themselves with this very real issue. I appreciate her taking a stride to raise awareness about what she’s passionate about.”

When talking about the future of the organization, Lily expressed interest in expanding the number of student participants and collaborating with people from other schools. In addition, the group plans to start hosting a weekly booth at the Claremont Farmers and Artisans Market on Sundays to raise awareness about gun violence.

For the latest news on Project Disarm Hate, you can follow them on Instagram. Lily is always open to having conversations and wants to get as many students from Webb involved as possible.