Webbies fight for survival in the Zombie Apocalypse 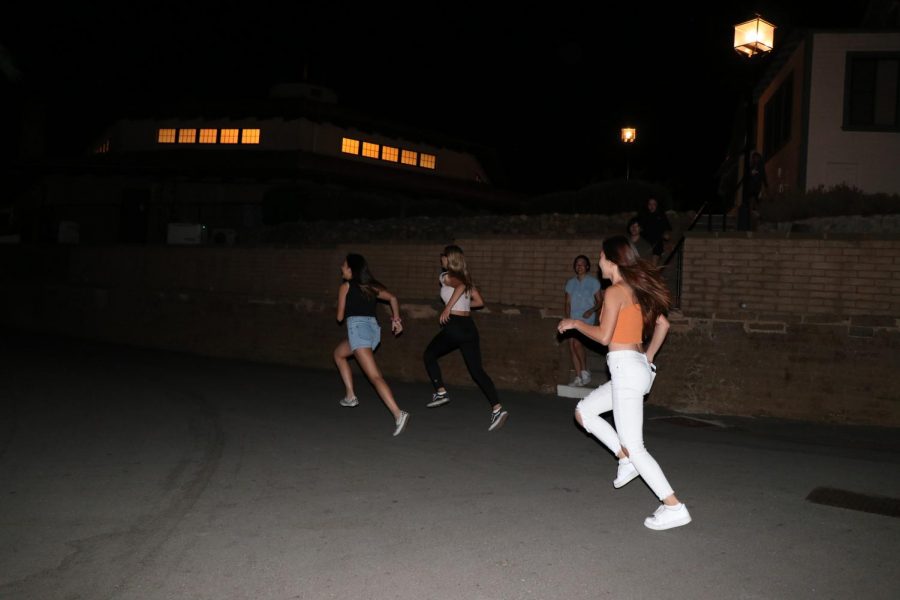 Webbies sprint towards safety and away from zombies.

When peer advisors (PAs) become zombies and Webbies become prey, everyone around the Webb campus knows that the annual Zombie Apocalypse is in full swing. With Webb students running towards each of the secret locations and away from PAs and zombies, the apocalypse is truly a sight to behold.

Students try to stay alive by running and hiding from PAs who are trying to hunt them down. Everyone wants to be a winner and survive till the end but those who die early on can still win by collecting the most glow sticks from other players.

The first clue was posted on STAS at 7:22 p.m.
“Good morning, friends! Our speakers today are the PAs!”
The zombie apocalypse had just begun, and students were running and hiding, trying to stay alive long enough to see the first clue and run for the chapel. The PAs chased after students, hoping to catch as many as possible and claim their glow sticks.

The second clue was sent out to STAS at 7:38 p.m.
“Batter up, land in the sand… Should’ve thrown underhand! Under Not Over!!! Seven… Not Nine!”
After getting their first stamp at the chapel, those lucky few who managed to survive ran off into the night to find a hiding spot. These students bided their time away from the PAs before racing towards the softball field.

The fourth clue was sent out to STAS at 8:01 p.m.
“Class of ‘52 says: “GO GET ‘EM GAULS. SHED SOME PRIDE!!!”
As the night got colder and the sun set, the Zombie Apocalypse was still going strong. The cold did not stop students from trekking up gym hill to hit the fourth location – Faculty Field – and collect their stamps.

The last clue was sent out to STAS at 8:18 p.m.
“…between a block and a plate, love all!!”
As the game wound down, the last and final clue was sent out to the players. The few survivors still standing checked their inboxes and rushed towards the tennis courts and then to crossroads, hoping to claim victory for themselves.

With the fifth and final location closed, and students and PAs alike tired of running, everyone was ready to see who claimed victory this year.

Every year at the Zombie Apocalypse there are three categories for winners. Students can win “The First Person to Visit All Five Locations” by collecting a stamp at each of the locations, “Most Kills” by getting the most glow sticks from tagging other players, or

“Best Cheater” by coming up with the most creative cheat.

This year, the first two people to get to all five locations were Joey Silva (‘21) and Dean Woelfle (‘21),

Joey Silva (‘21) said, “It felt pretty good [to win]. I actually tied with Dean so we both won. I’m pretty competitive so it was fun to win. I didn’t really expect to win again but I got lucky.”

Giselle Alrachid (‘20) said, “It was a group effort between Emma, Liam, Frank, Chloe, and I. I’m happy we won because Emma and I were part of the winning group last year and wanted to do it again… Overall it was a fun experience that I enjoyed doing with friends.”

Cecelia Li (‘20) and Luke Raus (‘20) won the title of most creative cheaters by tracking Sharon Xu (‘22), a WCC reporter, as she went on the golf cart with the PAs.

Luke Raus (‘20) said, “It was my first time winning the Zombie Apocalypse and I’ve tried really hard every year. This is the first year I went for the cheat. Cecelia texted me and was like, ‘Hey you wanna go for the cheat? I have a thing,’ and I was like, ‘Sure.’ I just went along with it.”

Cecelia Li (‘20) said, “I kinda want to play but I can’t leave South Hutch patio and I can’t run so I wanted someone to run for me. And it’s fun, cheating is always fun… when it’s legal.”

The Zombie Apocalypse came to an end with the winners being announced on the South Hutch Patio. Students cheered on their friends who won and spent some time relaxing at the Halloween Carnival to end the night.