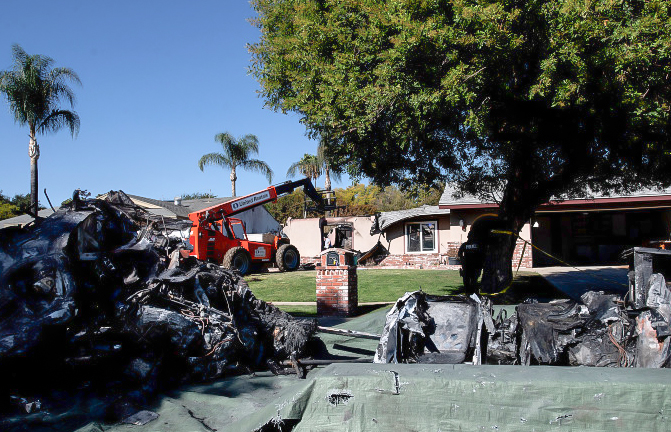 Firefighters remove remains of the plane crash from the Tonello’s house. Graphic Courtesy of Daily Bulletin

A 2007 fixed-wing Cirrus SR-22 flew for 19 minutes in the air until disaster hit over Upland. The aircraft departed from Zamperini Field in Torrance, California and was heading to Cable Airport in Upland. Two miles before it reached its destination, the plane plummeted into a single-story home in the 1200 block of Overland Court near Mountain Avenue.

While the massive flames erupted from his home, Matthew Tonello, 32, and his young son barely escaped without any injuries. The National Transportation Safety Board is still investigating the cause of the crash and will continue searching through the rubble in the house.

According to ABC7, Tonello said, “As soon as  [the plane] hit, I dropped to the ground… and immediately ran to my son, picked him off the couch and ran without thinking, just constantly telling him that it’ll be okay.”

The master bedroom of the house was destroyed, and the neighboring house was partially damaged. In an interview with ABC7, Tonello said that they would normally be in the master bedroom for his son’s nap, but luckily, his son refused to take a nap, and so they remained on the other side of the house. If not for his son’s refusal, Tonello believes that both of them would have died in that crash since they would be in the center of the crash site.

Some irreplaceable items were lost or destroyed after the crash. Honeymoon and wedding photos and videos, a video of the birth of their two-year-old son, Emmitt, and Tonello’s wedding ring have yet to be recovered. The family’s computers and clothes were also destroyed, but they have started a Go Fund Me Page with the goal of raising $10,000. People have already generously donated and helped raise nearly $15,000.

Marcelo Blanco, Captain of the Upland Police Department, said, “It’s unbelievably lucky. The way this plane went down and where… it landed right in their living room. We got their pet hamster out. The dog’s still missing.”

Tonello said that he is grateful that his wife, Heather, 41, and two daughters Lyndi, 16, and Kessid, 13, were not home at the time.

Chris Arzate (‘21), who lives near the Tonello family, said, “I was scared. Lyndi called me during lunch, panicked, and freaked out. She said a plane crashed in our neighborhood, so I was immediately scared for her family. She called me back a minute later and she said it was her house and that her step dad and baby brother were in there, and she didn’t know anything other than that.”

After experiencing a hard past couple of weeks, the Tonello family is recovering and moving into their new house.

According to Chris, “They talked to each other how home isn’t a place, but it’s their family. And their family, including their dog, was safe, and that as long as they were together, they were home.”

Although it was a traumatizing experience, thanks to the help of many neighbors, friends, and strangers, the Tonello family is taking it one day at a time and will continue to support each other.