Why “Ok, boomer” is the last straw for the youth 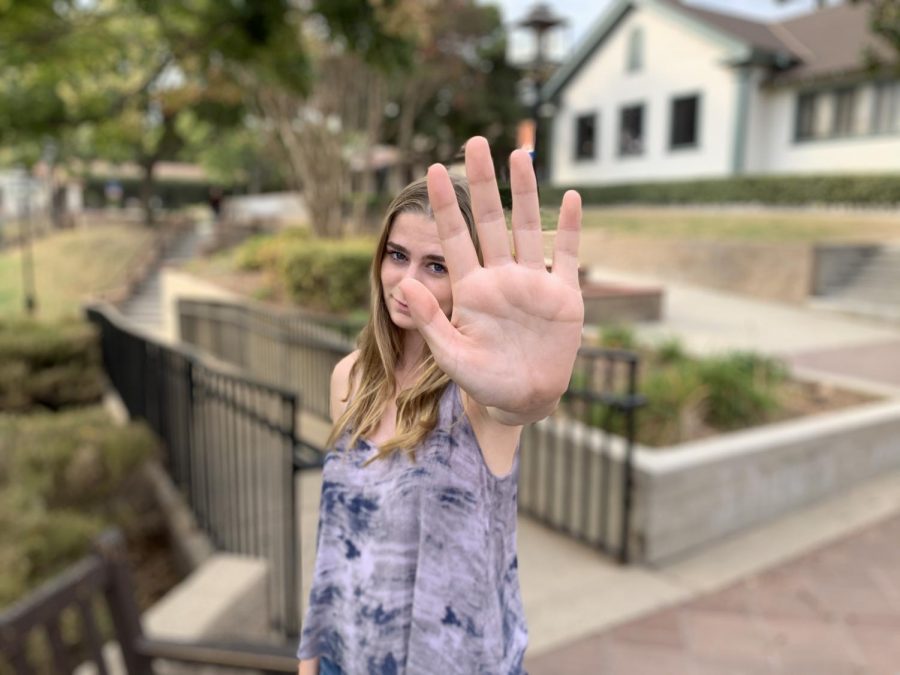 Victoria Romero (‘20) raises her hand to take a stand with “Ok, boomer.”

Do you remember a time when an adult was scolding you, and they just did not understand where you were coming from? And no matter how hard you tried to get your point across, they never listened and continued to force their ideas onto you? You may not have known it then, but there is a perfect phrase to respond with: “Ok, boomer.”

Let me explain the phrase. Boomer refers to the generation of baby boomers, born between the years 1946 to 1964. In a recent study, baby boomers were found to control 54% of the total household wealth in the United States. Millennials hold only 4% of that wealth, yet baby boomers expect millennials to carry their own weight despite such high economic inequality.

“Ok, boomer” started when a middle-aged man created a TikTok video stating millennials and Generation Z have “Peter Pan Syndrome,” meaning they never want to grow up. Millennials and GenZ were quick to respond to the TikTok with “Ok, boomer,” overwhelming the comment section. What the man said is far from the real case. It is hard to want to grow up today because the older generations left behind many responsibilities and created many problems that need to be fixed.

Older generations continue to voice their opinions about the ways millennials and GenZ dress and act. Comments such as, “You’ll never be hired if you have tattoos,” or “Stop being so sensitive” are common things they say, which held social value when they were growing up, but not today. People today are more confident expressing themselves in different ways, and if we go back to the social norms of the 60s and 70s we will set back the significant progress that has been made.

Times are changing and the people who are in power now most likely will not be in power in the next decade or so. Many millennials do not share the same views as boomers and as they grow older, they are slowly rising into positions that hold enough power to make substantial change. If boomers do not start making compromises with the demands of the youth, they will be removed from office.

In a New York Times article, Peter Kuli said, “Millennials and Gen Xers are on our side, but I think Gen Z is finally putting their feet in the ground and saying enough is enough.”

I am a senior in high school doing college apps, playing sports, and thinking about the endless possibilities of the future, but at the same time, I am worried because the decisions that boomers have made are negatively affecting the world and GenZ will have to clean up their mess.

“Ok, boomer” does not refer to only boomers, it is for anyone who tries to force old-fashioned views onto younger generations without taking the time to fully understand them. “Ok, boomer” is still alive and well since the immediate response when the TikTok was posted. Clothing is being sold with the phrase on it and several students at Webb even support the trend.

Maya Gutierrez (‘21), said, “I support [“Ok, boomer”] because it is about time people started calling out politicians that don’t have the best thing in mind for future generations.”

Scientists predict that climate change could be irreversible within the next 12 years, people of color and women are still marginalized, and there is so much economic disparity. To top it all off, many of the people who are running the country are not doing anything about these pressing issues instead they are continuing to try to block the youth’s voices, which will not work forever. We are more united than before and will continue to push our agenda for change forward until we reach a solution.

“Ok, Boomer” is a meme but also holds a higher impact when people continue to use it. People will continue to say it until baby boomers realize the problems they have created for new generations. Boomers have to realize that today’s society is very different from the one they grew up in and that their views and beliefs are outdated, but chances are unlikely since many are too stubborn to change their views.