The side of the Hong Kong protests less often talked about 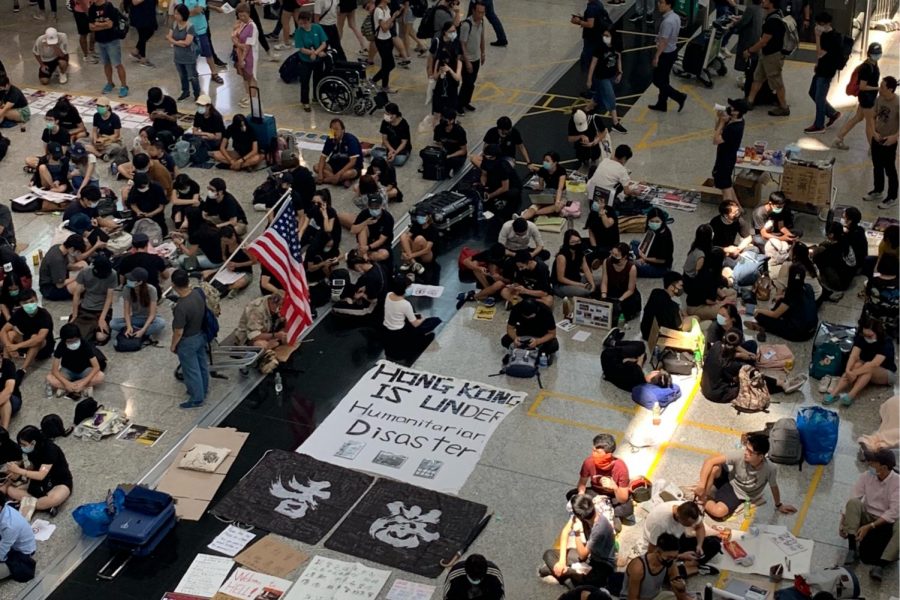 Webb is known for its students with rich cultural and ethnic diversity, including more than 15 students from Hong Kong. It is no secret that tumultuous events have been occurring in their homeland during this time, but it is about time that the fragments of the story that people have been hearing are properly explained.

Over this summer, we have witnessed the protests unfold in the city we call home, from a highly supported march against the Extradition Bill to a series of violent clashes on weekends that have persisted for 22 weeks and counting. For a long time, we have been proud to call this special place our home – this beautiful city where safety was never a concern – where a diverse population of people have lived in relative harmony. Now, we can only watch, in pain, as our home burns down to the ground.

On June 9th, 2019, over one million protestors took to the streets to protest against a proposed Extradition Bill, which would allow the law enforcement authority in Hong Kong to detain and transfer people wanted in countries and territories with no extradition agreements, including Taiwan and mainland China.

With Hong Kong’s population at 7.5 million, it was a massive achievement for Hong Kong citizens to stand strong to protect their legislative independence as a ‘Special Administrative Region’ of China. While it may seem to be a mere battle between social classes at this stage, with the rich supporting the government and police and the lower, middle classes standing on the side of the revolution, this phenomenon was not always the case.

The proposal of the Extradition Bill was a decision met with almost unanimous disagreement from the people of Hong Kong. Members of all parts of the social ladder in Hong Kong voiced support for the march against the Extradition Bill, which they saw as a violation of the ‘One Country, Two Systems’ agreement made in Hong Kong’s handover in 1997. However, when the protests descended into violence and chaos, continuing even after the bill was ‘suspended unconditionally’ and completely withdrawn, the true divergence of sides occurred.

Joslyn Lo (‘21), a Hong Kong native, said “The situation is clearly getting out of hand, but there’s really nothing else the protestors can do with the lack of response from the government.”

As the world increasingly brings attention to this controversial issue, the severe effects of the one-sided press begin to show. With the ongoing trade war between the United States and China in recent years and its longstanding political tensions, it is reasonable for the U.S. to stand on the side of the protest for its beliefs in freedom and democracy. However, all the way across the Pacific Ocean, here in the U.S., the protest that people think they know only shows one side of the barricade in Hong Kong.

Before we quickly take a side on the issue based on our personal political beliefs, we should make sure we truly understand the situation. Being in support of democracy within a country does not mean you have to stand with the ‘freedom fighters’ of Hong Kong and condemning the protest does not mean that you are a fan of an oppressive government.

The five month long protests are a lot more than a revolution for universal suffrage, they are a war waged between the protestors and the police force of Hong Kong. The five demands were created on the foundation of the complete withdrawal of the controversial extradition bill, which has already been satisfied by the government. With the main goal of the movement already satisfied, the protesters have turned towards targeting police brutality and ‘oppressive Chinese government’.

The police have certainly had their fair share of mistakes when handling this situation, as many people question their excessive use of tear gas and brutal force. Most recently, a traffic police officer was filmed shooting an unarmed protester with his pistol in a clash. Another officer was filmed charging at escaping protestors on his motorcycle. These events have sparked outrage from the citizens and become the center of attention in recent riots that have brought the city to a standstill for two days straight, as schools are suspended and many people are unable to go to work.

As the world voices its support and stands with the protesters in Hong Kong, criticizing the excessive brutality used by the “terrorist police,”, it is also important that we look at the other side of the story. Amidst the smoke of the tear gas rounds, there is the flame of the petrol bombs that always seem to go unnoticed.

Over the months, the police have been demonized, branded as terrorists, and even received death threats from protestors to their families and friends. Police have been risking their lives, standing in the line of armed protestors, working day and night only to find out that the people they aim to protect have turned against them, and that the world has branded them as “黑警” [”gangster police”] from the result of a press that portrays them as the antagonists of the movement.

In recent months protestors have hurled bricks at police stations, vandalized metro stations, and targeted various organizations with the slightest affiliations to China. They have beaten up tourists from mainland China simply because of their nationality, stabbed an unthreatening riot policeman’s neck, knife-attacked a pro-Beijing Legislative councilman for his conflicting political views, and most recently lit a man on fire after he expressed his disapproval for the protests. The protest is far from a movement for freedom or a movement of autonomy from an oppressive government – it has become a series of extreme acts of hatred targeted towards conflicting parties.

It is simply a matter of choice. It is easy to say that you are striving for democracy, but at what cost? It is easy to say that you are fighting for the future, but by what means? What is the purpose of fighting for a future when the process of doing so creates distrust among society, drawing a fine line between those who are pro-government and those who are anti-government. Is a city whose people do not trust the police to keep them safe, a city forever known for its constant rioting, what the future holds?

Ten thousand miles away, here in the U.S., we hear the rallying cries “revolution of our times” and “liberate Hong Kong,” but what do these cries really mean? It may seem easy to draw a line between freedom and oppression, but before we do so we must understand the true oppressor and true fighter of freedom. When pursuits for freedom prevent people from holding their independent political views, it defeats the purpose of the “fight for freedom” as their rallying cry. It is not obligatory as a United States citizen to stand with the ‘freedom fighters’ of Hong Kong, and similarly, standing against the protest does not tie you up with supporting an oppressive government. The word “oppression” can cause people to rule out antagonists quickly, but before we point fingers at the “oppressive” Chinese government that hides the truth from its people, we should ask ourselves: “How much of the truth do we know?”

Let us not pick sides merely because of our beliefs in freedom, but pick our sides based on our understanding of the situation. Pursuits for freedom are understandable for Hong Kong, a region that has reached such economic and social accomplishment, yet still cannot vote for its own leader. However, destroying our home, dividing its people, and disrespecting its government is not the proper way to fight for Hong Kong’s future.