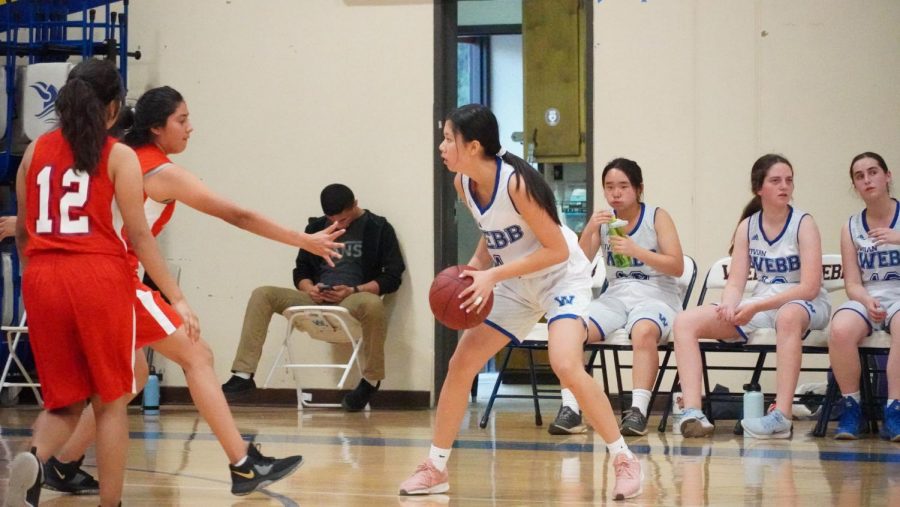 From struggling to get double digits on the scoreboard in the first part of the season, the team has come a long way. The win on January 10th represents a major turnaround; just a few weeks ago, the team lost to CSDR by only two points on Tuesday, December 10th.

“With a large percentage of the team having never played basketball before, the strides they have taken over the course of the season were amazing,” said Nika Haleftiras, the Head Coach of the team.

The team faced a lot of unexpected adversity. The game was two days after the break; most of the team suffered from jet lag and sleep deprivation. Catherine Li (‘22), the point guard for the team, even took a small nap on the benches during half-time while her teammates practiced.

Additionally, the game itself was quite an emotional roller coaster.

“We kept playing hard even though the refs weren’t calling fouls on the other team, and we didn’t let anything keep us from playing the best we can. We left it all on the court,” said Julia Fenner (‘23), the co-captain of the team.

The team pushed through difficulties and earned their triumph. They have exerted notable effort throughout the season. While many Webbies enjoyed their Christmas break traveling around the world, the JV basketball girls spent the vacation doing conditioning and cardio to keep in shape for the upcoming game.

“Every team has a personality, and this team is gutsiness and fearlessness incarnate,” Kevin Riel, Assistant Coach of the team, said. “This team never stops fighting, even when the competition is stacked, which makes me breathlessly proud.”

Apart from the hard work, a crucial reason behind the victory was the support and love circulating around the team.

“The girls’ positivity and tenacious attitudes coupled with their love for each other have promoted growth in ways I did not think possible,” Coach Haleftiras said. “I am so proud of them for embracing all the challenges and obstacles in their way with strength and fortitude.”

During the game against CSDR, Heloise Robertson (‘23), co-captain of the team, gave frequent speeches about the team love and camaraderie in the team to encourage her teammates.

“Just remember how much we all love each other while playing,” Heloise said. “I love you guys so much and I know our support will carry us through this win. Just keep thinking ‘I want us to win, I want to make the people I love feel happy.’”

There is still a lot of room for improvement and team members have set goals for the next game.

“I missed all my free throws again. Next time I am going to make my free throws,” said Nancy Lin (‘23), the shooting guard of the team.

Looking forward, the team is excited to play against even stronger opponents such as Fairmont Preparatory Academy next Friday, January 24th.