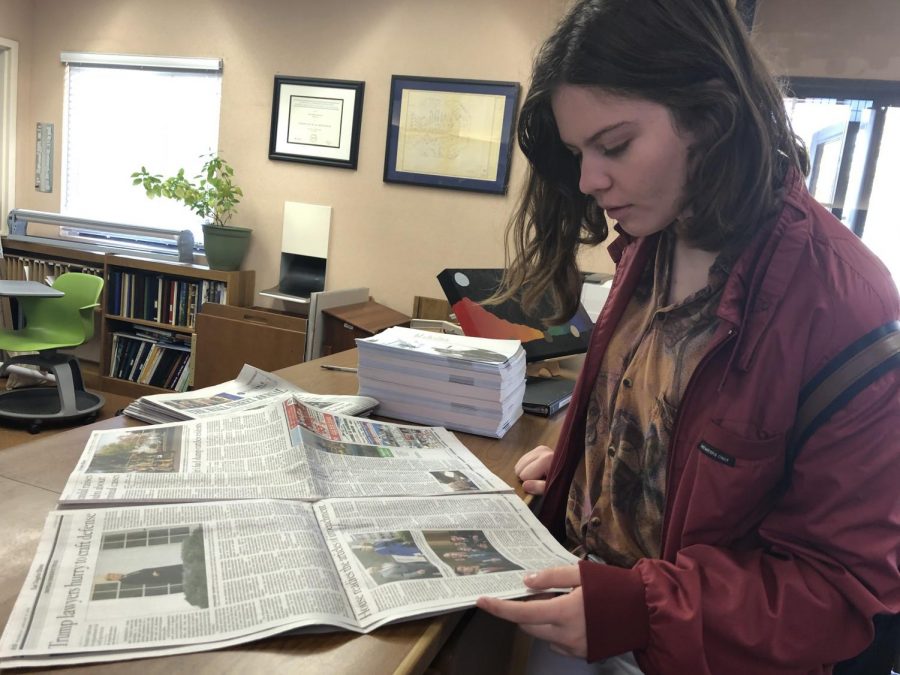 Eleanor Corbin (‘20) reads through the newspaper that covers the impeachment of Donald Trump.

In Honors Modern Constitutional Debates, students were shown two articles on the War Powers Resolution that the House of Representatives voted on recently. One article was from Fox News, a right-leaning institution, and the other was from the New York Times, a left-leaning news source. Students were then asked to evaluate the subtle differences in their political stances, and many failed to identify the disparities.

All journalists are human beings; all human beings are unique in their perspectives, and thus all human beings have their own points of view and even biases, the personal partialities in journalistic writing that reflect one’s prejudice. However, one of the most defining aspects of journalism ethics is the ability to remain unbiased and present truth. Journalists face the dilemma of staying true to their authentic voice while presenting unbiased journalism.

Biases are essentially different from points of view. While points of view are the natural stances people take, such as leaning left or right on the political spectrum, biases are the partialities in journalism writings and media (in this case, language or writings in journalism that unfairly present one group of people without solid facts or evidence as backup).

Many things affect journalists’ unconscious bias as personal experiences and upbringing, social norms, and cultural contexts can all lead to undesirable consequences, such as further stereotypes and inaccurate presentations of information.

“I noticed that in news reports about mass shootings or of tragic events, generally speaking, if the culprit happens to be white, [journalists] bring up mental health more often than in the cases where the criminals are people of color – this reveals a huge problem of the American journalism,” Leslie Huh (‘22) said.

In similar cases, many readers have come across the description of African Americans as suspects of crimes and white Americans as victims in crime reports. Unfortunately, racial profiling and bias extend from legal cases to journalism, a major source of knowledge of the American citizens.

Although implicit bias (implicit social cognition) comes from the subconscious, it impacts the readers and society as much as any types of bias. Implicit bias in news articles can shift the opinions of neutral readers in both the political and social spectrum.

“News should be the facts where readers form their own opinions. For the integrity of the institution, journalists should stay as neutral as possible… If you only read either CNN or Fox News, you would form very different opinions of Donald Trump,” said Will Allan, humanities department faculty. “If somebody is a devoted Democrat or Republican, the news bias would not make any difference. For the undecided voting public, however, news would make a lot of impact, so people need to know where the bias is coming from to become better voters.”

In the writing process, journalists constantly find themselves in the conflicting situation of having to avoid bias while still holding their own opinions – many journalists unintentionally favor certain voices (affinity bias), specific pieces of information (confirmation bias), sources of information (anchor bias), or the mainstream trend (Bandwagon bias).

While implicit bias can be found in all sections of journalism, the issue of implicit bias also exists in the opinion section, a section of innate partisanship.

The Webb Canyon Chronicle Opinion section is a platform for students to share their voices and even their biases. Nevertheless, journalists need to keep the basic ethics of journalism and the original mission of the Webb Canyon Chronicle in mind, even when writing opinion articles. Opinion section journalists are especially responsible for writing pieces that are supported by unbiased evidence and sources.

Readers of the Webb Canyon Chronicle consume information and opinions through the reading process. However, if implicit bias exists in the articles, readers’ consumption of knowledge will also contain the ones we fear so greatly as journalists: racial stereotypes, political misinformation, underrepresentation, and even misrepresentation of specific groups of people.

As journalists, we try our best to avoid the telling of a single story with a limited angle that would further stereotype and mislead the understanding of key events. In the age of violence and terror, it is especially important to stay true to the mission of being unbiased and bringing the readers with multiperspective stories.

“We all side with our own bias…and there’s something lost in the finding of arbitrary truth,” said Brian Rogers, humanities department faculty. “Observers of our current political climate would say that it is the biggest challenge…Journalists work very hard to do their job and fact-check, but the term ‘fake news’ has become a strategy people use to attack something they disagree with.”

In order to minimize bias, ensure fair readership, and embody the mission of promoting “the diversity of backgrounds, interests, and goals of the Webb community,” Webb journalists need to write and report with no partisanship of information or sources.

Instead of interviewing a friend, interview a wide variety of voices; instead of focusing on one specific opinion, take opposing views into account; instead of falsifying information to support one’s belief, stay true to the journalism ethics.

We need diversity in the newsroom – diversity of journalists and diversity of perspectives will minimize bias. It is one of the best solutions to avoid both explicit and implicit bias in journalism.

Although we value freedom of speech and the right to voice one’s beliefs, we need to ensure the fairness and ethics of news reporting. In an age where false information and fake news spread very quickly, we need to reconsider our language and articles in the face of journalism ethics and be mindful of the implicit bias we might write subconsciously.