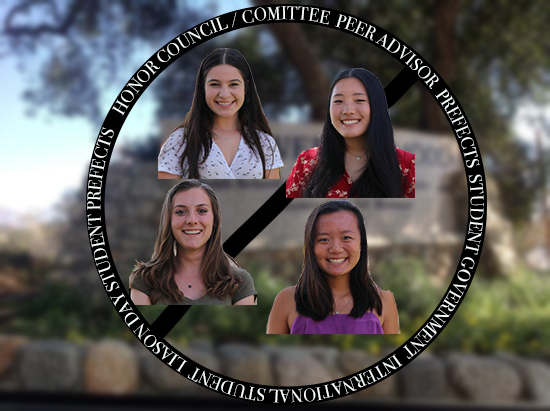 Leadership extends beyond a title. The Webb Schools’ mission statement summarizes the types of students that attend and flourish over the years. They are nurtured to “think boldly, mindfully, and creatively; act with honor and moral courage; lead with distinction; serve with a generous spirit.”

Leading with distinction certainly dominates daily life at Webb. Email blasts constantly announce the weekend events, dorm activities, rallies, and flex-times. Leadership groups hold meetings during X-blocks with their advisor to review information and individual responsibilities as they prepare to go out and serve the campus. Some dorms even have a student’s leadership position listed under their name tag outside their respective rooms.

We recognize that leadership is not directly correlated with a title, but we encourage Webb administration to reduce the number of available student leadership positions by at least one-third, and thereby increase the responsibilities appropriately among the leaders. Not only would this change weed out students who are not as dedicated, but it would also encourage those with leadership positions to step up and not slack off from their duties.

As an institution, Webb aspires to shape the future innovators and leaders of the next generation. Leadership is a pillar of the mission statement and vital to the learning process at Webb because it is meant to prepare the students for future careers and responsibilities.

The Leadership and Community Service page holds that Webb’s “vision of leadership is based on a model of ‘servant leaders’: leaders who are driven not by a desire for power and authority, but by a profound interest in serving the people around them.”

Each leadership group chooses new members through a different holistic process, whether it be based on popularity votes or through interviews. Of the current 407 students, the school officially recognizes 110 leaders, 27.03% of the student body. Factoring in the chapel council and admission fellows, this statistic rises to 36.7%. While there are only two student government positions available for freshmen and limited sophomore opportunities, all upperclassmen are eligible to run for leadership at Webb. Subtracting the 13 underclassmen from the 129 total leaders on campus, 55.5% of the eligible upperclassman student body is a “leader.”

With over a quarter of the student body and half the upperclassman with official leadership positions, there is a high chance that any given person would see at least one student with a title on Webb’s campus. However, having a large number of designated leaders does not equate to having meaningful leadership experiences.

Inevitably as human beings, the sentiment and value of holding a leadership position decrease as more people are recognized as a leader. And as people deter away from authentic leadership because of the sheer accessibility to a title, aspects of service and commitment also become less purposeful.

These selected individuals are expected to attend regular meetings within their specific groups, including student government, the prefect councils, the honor cabinet and council, international liaisons, and peer advisors. Additionally, deans lead meetings to develop the proper skills as an entity of leaders. Depending on the position and one’s commitment to their title, upholding an individual leader’s responsibility can require them to reserve over five hours a week.

The time commitment that students accept when they become an official “leader” at Webb can, undoubtedly, overwhelm the majority of high schoolers, especially when met with finals, college applications, or generally busy weeks; however, with more than half of juniors and seniors holding leadership roles, the potency of leadership is lost.

Many students assume that the title of a leader will open many doors for them, especially in the world of college admissions. In addition to providing students with an early opportunity to learn about leadership, it is reasonable that this college preparatory institution would present so many leadership positions. With over half of the upperclassmen holding these positions, colleges can see that Webb fosters responsible young people who would contribute to their future college campuses.

However, leadership extends beyond just a title to put on a résumé. One may argue that leadership means having the integrity to serve by example. For some, it means staying behind at community dinner to help the dining hall staff wash dishes, demonstrating moral support within their athletic team, and conscientiously holding the door open for someone struggling to carry a load of books. With 129 student leaders on campus, a percentage of leaders find themselves in a space where they are not needed to demonstrate integrity or lead by example.

Everyone has the potential to act as a “leader.” The question is, will you?

Please note that the Webb Canyon Chronicle staff unanimously voted in support of this editorial opinion.