Misinformation about Australian wildfires spreads faster than the flames 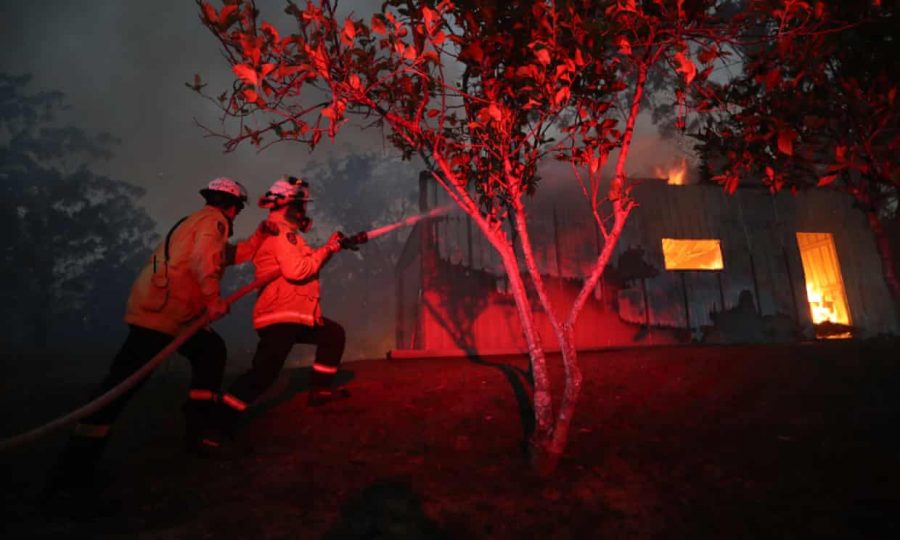 Firefighters try to put out the fire in Australia. Graphic courtesy of The Guardian.

The fires in Australia have been burning for months, spreading across the country and resulting in at least 25 deaths and more than 12 million acres burned. However, misinformation about the fires has been raging as well.

On Twitter, many users, including celebrities such as Rihanna, have shared an image of an Australian map highlighting locations where the fire was detected and citing NASA as the source.

While many Twitter users perceive the image as a demonstration of the current extent of fire in Australia, it is, in reality, a visualization of one month of cumulative data created by artist Anthony Hearsey. 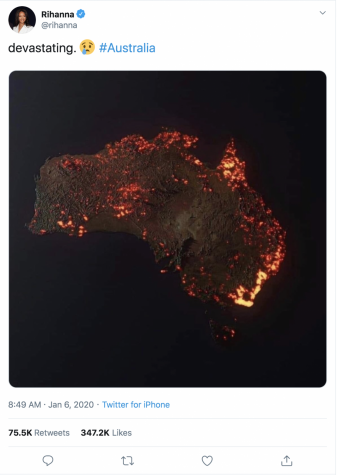 Another map widely popular on social media platforms has flame icons labeled across the country, claiming to show ”all the fires burning in Australia.” However, the data – originally from the Australian government website MyFireWatch – incorporates “any heat source that is hotter than its surroundings…” These sources may include gas flares, refinery furnaces or highly reflective large industrial roofs,” according to the website. 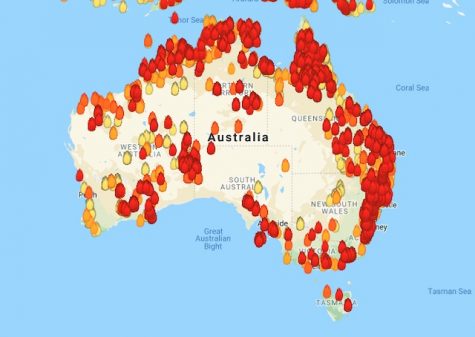 The misleading fire map circulating on the Internet. Graphic courtesy of MyFireWatch

Both of these fire maps are based on reliable data, but they only tell part of the story. The first map leaves out the time frame of the data while the second leaves out the types of heat sources it includes. As a result, both maps inaccurately present and exaggerate the fire situation.

However, there is another side to the story. The widespread fire maps have raised awareness and contributed to the largest ever fundraising effort in history. Despite the inaccuracy of the information, the visualization conveys a powerful message that has moved millions of internet users.

“I would think that this is acceptable because it is for a good cause,” said Shuci Zhang (‘23), the founder of the Regenerative Committee in the Webb Environmental Club. “If you put out the facts and data, people will be bored. Sometimes, you need to exaggerate a little bit, so that it raises awareness. They are delivering the right message. They do it because they care.”

On the other hand, some people are purely distorting the truth. False claims around the cause of the fire have been circulating on social platforms as well as news outlets, with arson being the most popular. A popular story suggesting the arrest of 183 arsonists has spread across the globe, as well as misleading figures stating that 75% of the fires were started by arsonists.

To the world’s disappointment, authorities have played a part in spreading this inaccurate detail, as Foreign and Commonwealth Office minister Heather Wheeler used the 75% figure to answer a question in the House of Commons on January 9th.

While the scientists were not able to attribute the fire to one single cause, a major facilitator of the fire is climate change. The more extreme weather patterns and higher temperatures increase the risk of bushfires and the drier climate contributes to fires becoming more frequent and more intense.

The fire has also caused a devastating amount of damage to the environment.

“The fires are going to have a major impact on Australia’s land and animal inhabitants, along with global impacts,” said Hunter Lange (‘22). “It is estimated that over 1.25 billion animals have been killed across Australia due to these fires, with the numbers rising. Many animals are currently left stranded with no food or water.”

As social media plays an increasingly important role in our lives, misinformation spreads fast. People now often depend on social platforms as their source of news because of its many advantages.

“I like reading news from social media sometimes because I want to know what my friends are looking at,” said Ashely Fu (‘20).

In the future, we have to stay alert and think critically, so that we can identify and avoid spreading inaccurate information. Apart from that, there are also a few things we can do to help Australia.

“If anyone has extra cash laying around, they can donate to organizations working to put out the fires or ones that are rescuing and providing food/water to animals that are starving,” said Hunter. “Another thing that can be done is to not support the consumption of animals because almost two-thirds of Australia’s land is used for agriculture.”

As thunderstorms pelt parts of Australia with rain, the blazes have died down notably, but it is still not enough to completely put out the flames. Currently, 82 fires are still burning, but the prediction of continual rainfall brings hope of further containing the situation in the coming weeks.