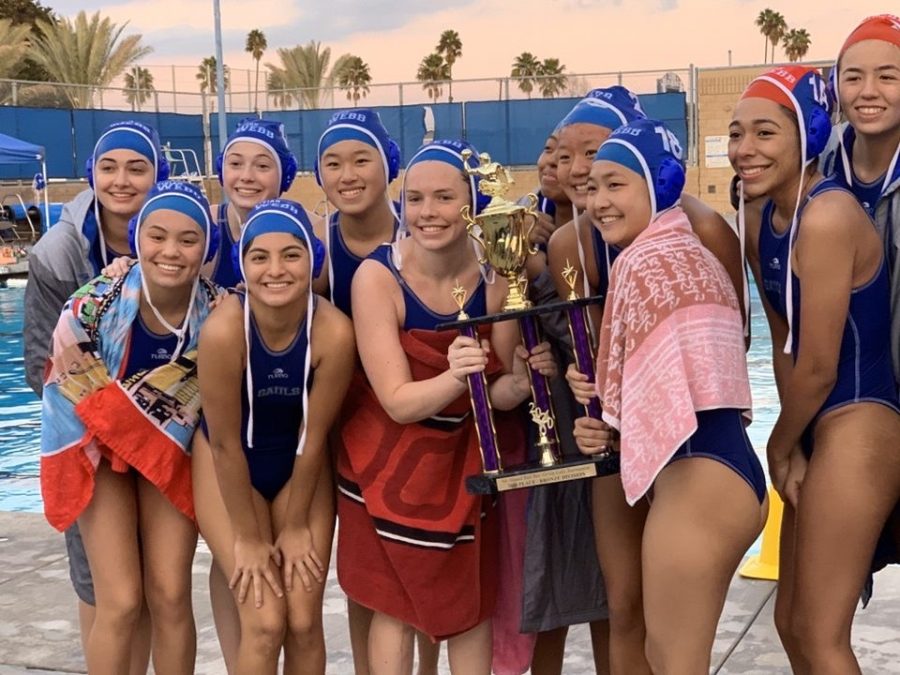 The start of the new decade opened with a banger tournament for the Vivian Webb varsity water polo team. Less than a week after coming back from winter break, the team played at the 6th Annual Lady Brahmas Winter Classic tournament hosted by Diamond Bar High School. Within the span of two days, from January 10th to January 11th, the Gauls played a total of four hard-fought, but successful games.

“It was a really good opportunity for us to get four games over two days, and kind of recondition ourselves and remember what water polo was,” said Tom Jurczak, head coach of the varsity water polo team. “I think there was some good team-building during this time, the girls really worked together and helped each other out, and really set us up for some good water polo over the month of January.”

The Gauls opened their campaign with a successful first day at Diamond Bar High School, winning all games played that day. The first game against Alhambra High School ended in a stunning 15-2 victory for the Gauls.

The Gauls outclassed Alhambra by only giving up two goals throughout the entire game, with strong contributions from everybody. Everyone was able to add to their individual stats, with Madeline Lilley (’22) securing three goals and Sydney Wuu (’20), Giselle Alrachid (’20), Haley Colorado (’22), Livia Hughson (’21), and Michelle Munguia (’20) each scoring two. Caitlin Pender (’20) and Alia Al-Turki (’20) both earned one.

The second game against La Mirada High School also ended in victory for the Gauls. Going into the game, Coach Tom Jurczak emphasized the need for strong defense and the importance of not giving the other team easy shots at goal.

Throughout the game, the Gauls held steady and put in a strong effort to keep La Mirada at bay. They scored many counter-attacks that eventually led to another 13-5 victory. During the game, Caitlin shot down La Mirada’s goalie with her five goals, along with goal contributions from Madeline, Alia, Sydney, and Michelle. After a successful day, the wins led the team to feel happy and confident going into the next day of competition.

“I thought we played really well,” said Coach Jurczak, when reflecting on Friday’s performance. “There’s always the worry that we’re out of shape and not ready to play, but we really stepped up and played some really good games. It helped that the first team we played was not quite in our class, and so we got our feet wet, you know so to speak. But the second game could have been a game that is really challenging, but we really stepped up. We countered really well, played really tight defense, and I mean, beat them up pretty badly.”

On Saturday, the team traveled to Chino High School for two more games of water polo. The first game for the Gauls was against Don Lugo High School. The game ended in a tight, but well- battled 6-8 defeat. The Gauls had some troubles offensively, missing many shots and giving up many good opportunities for scoring goals. Nevertheless, the Gauls put much effort into defensive work and communicating with the team. Some highlights of the game include Caitlin’s penalty shot, Sydney’s stunning fourth quarter opening goal, and goalkeeper, Lydia Toy’s (’20) whopping 11 saves at goal.

The Gauls’ final game was against Paramount. The Gauls maintained a lead from the 1st quarter, with four goals in Paramount’s net. However, by halftime, the score escalated to 6-5, and the Gauls were barely clinching the title. Webb managed to pull themselves together to a well deserved 11-6 victory with strong performances from everybody, including two goals each for Sydney, Michelle, Caitlin, Livia, and one goal for Giselle, Madeline, and Sara Hagiwara (’20).

“On Saturday, we faced the top team in our bracket and we weren’t quite as crisp as we were the night before, but we played really well,” said Coach Jurczak about Saturday’s games. We had a great effort which unfortunately ended in an 8-6 loss. So that put us in the third place game where we didn’t quite show up as well as we had earlier, but we did play well enough to kind of dominate really well and we won 11-6, which got us third place and a trophy.”

“I think the water polo team did really well in the tournament,” said Deanna Oei (’20), manager of the water polo team. “After watching the team practicing in the afternoons, I could tell everyone was constantly improving and it was great to watch them perform so well during the actual games.”

“On Friday night we played really well, the best we’ve played as a team, especially since we fully communicated with ourselves and our goalie,” said Alia, a third-year varsity water polo player. “It was so much fun and the feeling afterwards was great. On Saturday, it was a nice day but we lost our first game. However, we were determined to win the second game of the day in order to place us third and we worked so hard all together, played the game cleanly and fairly, and we won, resulting in Webb coming third in the tournament.”

“It was the most fun I’ve had on the team. Watching everyone play so well feels amazing,” said Kate Guernsey (‘20), a new member of the team.

“We went into the tournament not knowing what to expect from the teams we were playing,” said Michelle, a returning starter for the varsity water polo team. “To be honest, I think we all expected to lose considering our team is pretty new to the sport. Although we had just gotten back from break, we exceeded our expectations for the tournament. Our defense, for the most part, was strong and persistent, and our offense was smart. So proud of us, definitely our best games of the season.”

The Gauls finished the tournament in third place. The Vivian Webb varsity water polo team kicked off their league campaign last week on January 17th, 2020 at home against West Covina. The team is currently looking forward to the rest of the season.