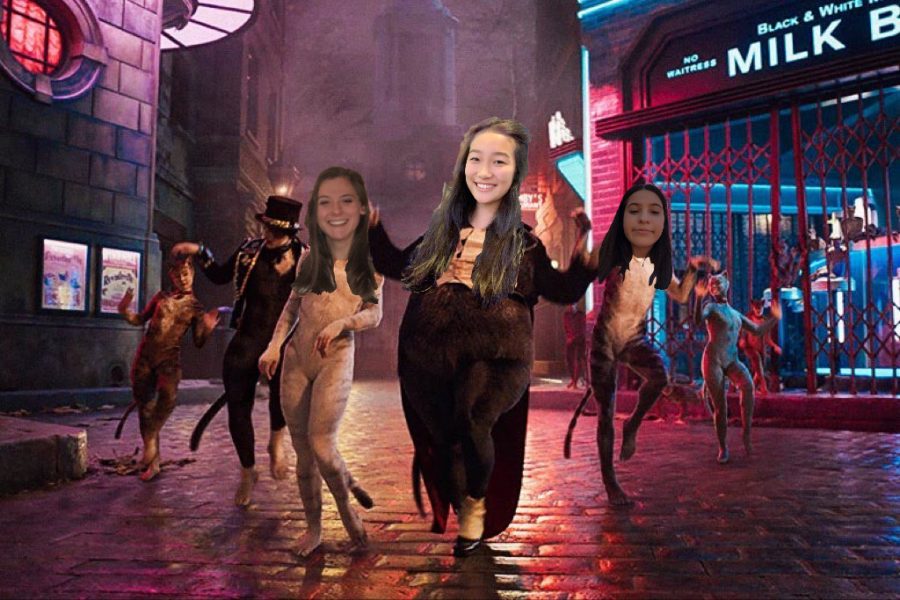 Senior members of the WCC staff pose as cats from the musical. Graphic courtesy of Janitza Luna

On Saturday, January 11th, we made the perilous trek all the way to Regal Edwards West Covina to see the infamous movie: Cats. We knew what we were walking into; we had read the scathing reviews on Rotten Tomatoes. Upon Googling showtimes, we were met with discomforting tags—“cringe-worthy,” “awkward,” “disturbing,” the list goes on.

Yet despite all the warning signs, we thought, “What could be better than a movie adapted from a musical adapted from a book of poems by a man utterly infatuated with cats?”

As it turns out, there are hundreds of better movies. Maybe even thousands. Our first grievance: the cinematography. Most movies have very specific styles of cinematography. For example, Wes Anderson always moves the camera with slow, side-to-side movements to create a calm, symmetrical feeling throughout the movie. However, Cats moves in all different directions. It shakes, slides, bumps, and turns. The chaotic movements left us feeling dizzy and confused rather than satisfied.

Trying to adjust our eyes to the point of view of a cat made it difficult to focus on the overwhelming amount of characters. The movie is centered around Victoria, an abandoned cat – played by Francesca Howard, a principal dancer in the Royal Ballet – who has just arrived in the territory of the Jellicle Cats. She travels through different houses and meets Grizabella, Mr. Mistoffelees, Jennyanydots, Macavity, James Corden in cat form, Taylor Swift in cat form, a gray cat, and so many more cats. How are we supposed to remember every single cat when none of them bring any substance to the movie?

Each cat performs a song and dance to “show off their talent” to a supreme orange cat called Old Deuteronomy. Out of the 20 songs performed, we can only appreciate two: “Mr. Mistoffelees” and “Memory.” For a Tony award-winning musical and original score, it is rather unfortunate that only two Cats songs were kind-of enjoyable during the movie. Even “Memory,” which is sung by the amazing Jennifer Hudson and composed by six-time Tony Award winner Andrew Lloyd Webber, is rudely interrupted by Victoria.

We left with many questions. What is a Jellicle cat? Did Grizabella just float to cat heaven? Why was Victoria snuggling with every cat? Did Mr. Mistoffelees get jealous? What would happen if Old Deut died? What do the second and third cat names mean???

Perhaps the thrill of Cats comes from the terrible dialogue, confusing images, and nonsense that is the epitome of Gen-Z humor. Either way, we thoroughly enjoyed the experience despite how uncomfortable it made us.

Take this quiz to discover your inner spirit cat.