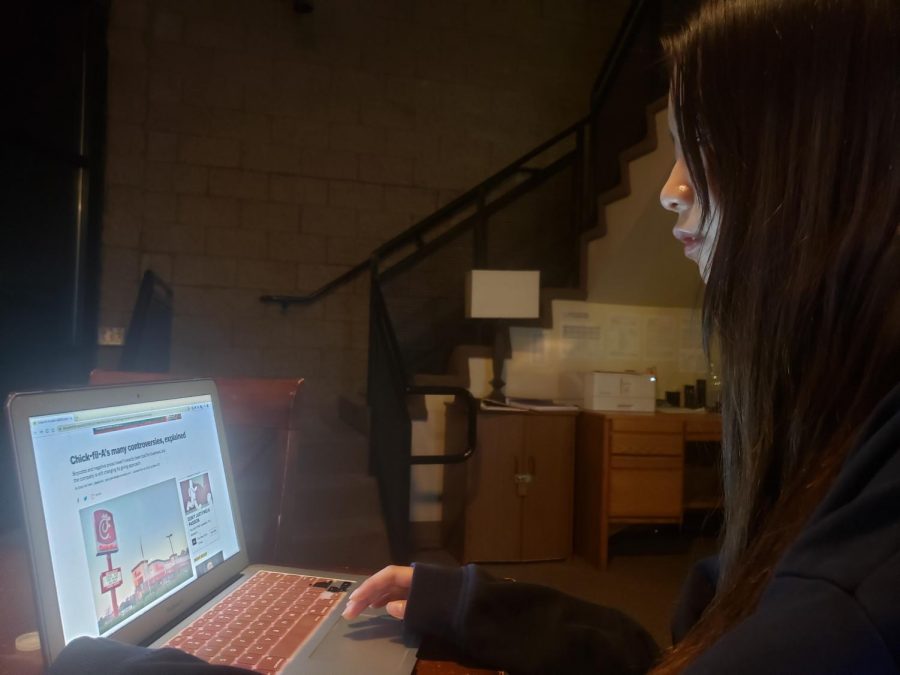 Emily Wang (‘22) ponders over our class’s eating habits as she reads a news article about Chick-Fil-A’s business practices.

There is no better way to end a class meeting than by savoring some fresh grapes and grabbing a sandwich to go. Snacks have always been an important part of the VWS class meetings. From last year’s snacks lined up outside of Liu Cheung theater to today’s snacks on the South Hutch sharing table, students of the VWS Class of 2022 have enjoyed every bite.

However, the Class of 2022 has changed its array of delectable treats.

The class originally ate grab-and-go meals from Chick-fil-A, courtesy of a class parent who received discounts from the restaurant. The snacks began to cause many controversies, and the sophomore girls became wary of the morals behind their decision because Chick-fil-A appeared on the news for donating money to anti-LGBTQIA+ organizations, fueled by the company’s Baptist beliefs.

“Some people in our class came up and pointed out the situation,” said Jojo Jiang (‘22), vice president of VWS Class of 2022. “They informed [the class officers] that Chick-fil-A, the snack we used to have during class meetings, was donating to anti-LGBTQIA+ organizations.”

The class officers were able to make the decision that truly represents the will of the VWS Class of 2022.

“As a class officer, my main role is to really present the need of our class,” said Catherine Li (‘22), VWS class president of 2022. “Our class has a lot of energy, and most people are concerned with social justice and sustainability topics. I think it’s important to reconsider our choices and bring awareness to the community as a class.”

The class presidents made a survey to know more about what the class thinks, and the results and resolutions were clear.

“The class presidents talked to us class advisors and made a survey,” said Dr. Wendy Maxon, lead class advisor of VWS Class of 2022.“A majority of people who completed the survey did not want to keep having Chick-fil-a.”

“I think it is the message behind the event that really matters,” said Jojo. “As class officers, we want to be as inclusive as we can. We don’t want to be unfriendly to any minority groups.”

However, the decision was more than a change from Chick-fil-A sandwiches to mini hot dogs.  Boycotting a company that supports anti-LGBTQ+ institutions is an act that represents the sophomore class’s belief in human rights.

“This was in part a communal effort,” said Dr. Maxon. “Given what was going on in the news at that moment and given our commitments to human rights and equality, we thought that it would be a good idea to stop supporting the company.”

As advocates for justice and human rights, the VWS Class of 2022 has made the move of being welcoming to all sexualities by ceasing to buy the products from a company that donates money to unjustified causes.

Although the news of Chick-fil-A has changed since last November, the sophomore class decides to rest with their decision for now. The impact of their choice reaches beyond a change of snack to a signal of valuing social justice, equality, and diversity of the Webb community and society beyond.