Honor and trust: it is a collective effort to create a safe community 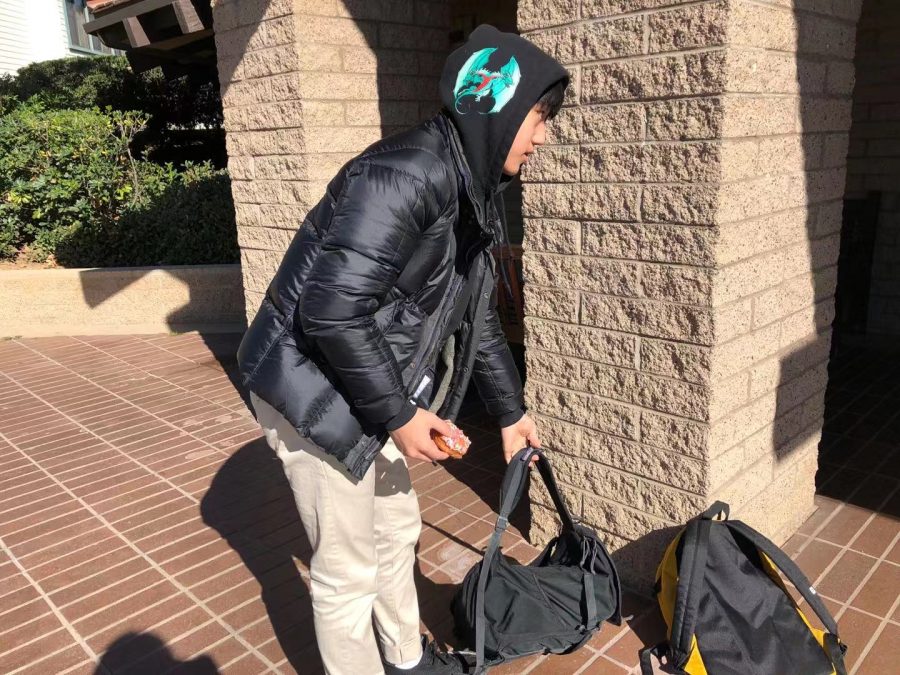 Chris Chung (‘22) holds his backpack outside the library.

Like many other prospective Webb students during my initial tour, I was surprised to see backpacks and other personal belongings lying in front of the library, outside the Hooper Center, on South Hutch patio, or stretching all the way up the hill in front of the boy’s dorms. I was mostly impressed by the image of a campus of mutual trust—I knew immediately that Webb was a school where students could trust the community enough to leave their belongings out in open spaces.

My assumption was confirmed when I finally came to Webb as a student. I trusted the people around me. I felt comfortable leaving my backpack (which contains valuable things like my laptop and cell phone) in front of the classroom of my next class. I strongly believed that all students, staff, and faculty members felt as safe and comfortable as I did in the community.

“It is typical for a lot of students to leave their stuff outside after practice,” said Madeline Lilley (‘22). “It is very convenient. I would leave my phone and backpack in public places knowing that they will still be there after I come back.”

“I think we live in a little bubble where we think that it is not a real world,” said Rick Duque, WSC Dean of Students. “In reality, it is. I feel uneasy sometimes when everyone leaves their things in the open. People would not do that in a mall. I wish everyone can be honorable and not steal, but we don’t live in a society like that.”

Like many Webb students and faculty members, I take pride in the honor code and the trust in our community.

“I either leave my school backpack or sports bag outside because it is convenient and part of my routine,” said Emma Holliday (‘22). “Before this incident [of losing my backpack], I always felt safe because I remember when I came to tour Webb, I had the impression that we can leave our things wherever on campus and [they] would always be there after we come back, no matter when. I kept that in my heart and trusted that.”

In my freshman year’s Fundamentals of Composition class, the first assignment was to read and annotate the Webb Honor Code and Boundaries of Responsibility. From then on, new students at Webb had a better understanding of the line, “Without honor there can be no trust, and without trust there can be no community.”

My perception of Webb as a safe community, however, began to falter when I saw STAS emails about lost items. Although sometimes the items are found quickly by the owners, and students do hold responsibility for losing their possessions, many acts of stealing seem deliberate.

Many students make STAS posts and find their belongings five minutes later, but the posts still leave a negative impression on the readers. Likewise, the lost computers could have been a complete misunderstanding. It is possible that the theft was done by students outside of the Webb community. Either way, we need to be mindful of the honor and trust in the community.

I started to find myself reading emails about a student who lost his soccer ball and found it the next day in the hands of a group of unfamiliar upperclassmen. I have read an email about a lost chair on Jameson lawn. Some emails were about lost umbrellas in front of the dorm hallways on rainy days. Countless emails were drafted by desperate students who lost valuable items like computers, cell phones, AirPods, and even glasses.

As an oblivious person, I have experienced the panic of realizing I lost something important to me, and I understand the feeling of desperation expressed in the STAS emails.

“I know things like this happened last year, but this year it has already happened a handful of times,” said Emma. “I just did not know that it would happen to me. I wish I could have been more cautious… It did not happen to other people so they don’t really care, but for the victims themselves, it is very saddening and disappointing.”

When you leave something in an open space and come back from a commitment and realize that the belonging is gone, you realize that your trust in the honor code, in the boundaries of responsibility, and in the community is betrayed. You trust the people who pass by, the bystanders, and the community as a whole when you leave your things in public places on campus. As belongings disappear, so does the trust. When a dishonorable action takes place, the trust from the victim diminishes. When trust is gone and no one feels safe but instead lives with fear and suspicion, community shatters—without trust, there is no community.

“It is very disappointing and shocking about the culture at Webb…” said Madeline. “I think that we need to be more proactive, keep an eye on our things, and we should install security cameras… Let [losing my backpack] serve as a lesson and warning for everyone who leaves their stuff out there because I learned it the hard way.”

“There have been incidents of theft, but it doesn’t mean that there is no trust in the community,” said Mr. Duque. “We have to be more vigilant and look out for each other.”

The Webb Student Handbook 2019-2020 clearly states that the honor code is “based on the belief that each individual must be self-governing according to standards of honesty, integrity, respect, and fairness.”

As part of the honor code, students are expected to “act with good intent, common sense, and attention to the safety of self and others” and “respect each other’s person and property.” The act of theft in every way violates the two specific honor codes of the Webb community.

According to the boundaries of responsibility, “community members are expected to uphold the good name of Webb, even when they are not under Webb jurisdiction.”

The honor code is no joke. Our understanding of the honor and trust at Webb has to go beyond our freshman annotations and MEAL paragraphs. Honor and trust is something that affects us every day; we want to know and believe that we are studying, doing afternoon activities, and living in a safe and trustworthy environment, even though it is hard to achieve perfection.

The responsibility of individuals exceeds simply not taking the belongings of others without permission. Everyone walking on campus holds the responsibility to act with honor, become honorable bystanders, and finally, uphold the good name of Webb—that is, to become guardians of the honor code. Only when people truly understand the meaning of the honor code and the consequences when it is violated can the community become a safe and all-encompassing place for those in it. We all want to feel safe and trust the community, and it is our job to restore the image of a safe community.

There are many things that we can do to become guardians of the honor code of the community.

“It saddens me, but I understand that no place is perfect and no one is perfect,” said Mr. Duque. “If someone is stealing because they are angry, they can always reach out… We bought the new lockers and should start using them when they are available. They are great places to store things… As the sign says in Claremont and every city, when you see something, voice it out and let people know.”

I do not want my faith in the honor code to falter because of some STAS emails or the complaint of a friend. It is time for us to be aware of our actions and their everlasting impacts on our community.