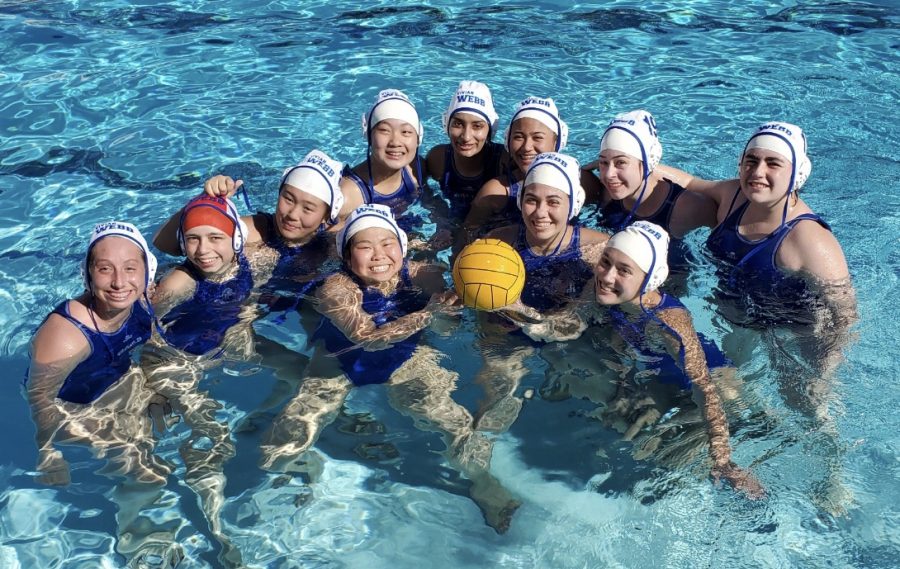 The VWS junior varsity team poses after playing three games in the tournament.

As the season came to a close, the VWS junior varsity water polo players grew excited to compete in their first and last Hacienda League Tournament of the season. The VWS water polo team has trained and improved their skills throughout the season. Gaining many new players this year, the JV team struggled at the beginning of the season because of limited practice time and a general lack of knowledge about the sport.

“At first, the JV team had a hard time swimming, but throughout the season, they have shown significant improvement and they now have more endurance,” said Olivia Barry, assistant water polo coach. “They also have learned the simple rules on offense and defense which has really helped them improve and get better throughout the season.”

However, in the second game against Los Altos High School, the team had a tough breakdown halfway through the game and ended up in the losers bracket. After lunch, the team played Walnut High School. Starting out behind, the team did not want to end their final game with a loss. The team started working together and making necessary adjustments. In the end, the team fell short, but the score was extremely close.

“The JV tournament was very successful because the team made many adjustments throughout the day which helped them keep the scores of the games so close,” said Hannah Long, assistant water polo coach. “They did amazing and they had awesome defense and offense. At the beginning of the season, half of the team struggled to even throw a ball, but in the tournament, it was incredible to see how strong everyone has gotten and they made me very proud.”

The JV team has worked extremely hard over these past few months, and many cannot wait until next year’s season.

“Next year, I really want to get better and be able to contribute to the team,” said Yvette Shu (‘23). “I am also really excited to see us beat the teams we may not have beat this year.”

Although the team’s record this season included lots of losses, what mattered most to all the players was applying their adjustments and showing off their hard work. Throughout the entire season, all the players learned new aspects of the game and demonstrated that they understood how to play. Next year, they will be able to teach other incoming players who may be in similar situations.