And the Grammy goes to… 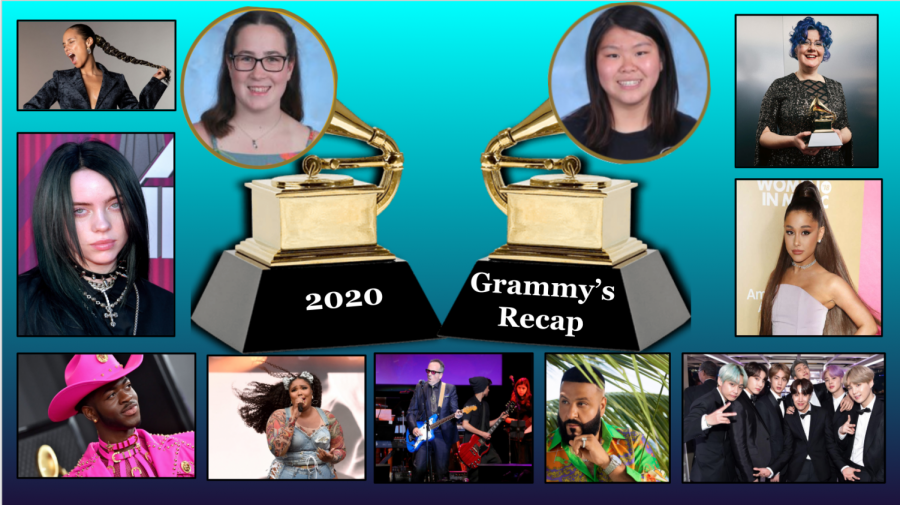 The music industry is always bustling with energy, but every spring, the music industry has a little more energy than usual, because the Grammy Awards, a ceremony that celebrates the “recording industry’s most prestigious award,” take place. The 62nd Annual Grammy Awards were held on January 26th, 2020, at the Staples Center in downtown Los Angeles.

“The Grammys is my favorite award show in the entertainment industry other than the Oscars,” said Malika Neogi (’20).  “However, I like watching the Grammys a lot more because there are more performances. This year, I didn’t get to watch the awards, but I constantly tuned in to check for updates. Also, since Billie Eilish is one of my favorite artists, it was really exciting to see Billie and her brother Finneas sweep 10 awards. It’s amazing how Billie, at such a young age, was able to, and is only the second artist in history, to sweep the night’s biggest awards.”

Billie Eilish and her brother Finneas won a total of 10 awards. Billie Eilish won the biggest awards of the night including — Best New Artist, Song of the Year, Record of the Year, and Album of the Year. Unfortunately, other artists who have been popular in the past, such as Lana Del Rey, Taylor Swift, and Ariana Grande, walked away empty-handed.

“Ariana Grande did not get anything, which I was kind of surprised about,” said Nnenna Ochuru (’21). “She put two albums out in one year, both of which were good. The Lil Nas X Performance was really good plus he had BTS and the ‘yodeling kid’ which was cool. But overall I feel like there have been better Grammys in terms of performances and award distributions.”

The Grammys even had a personal connection, as a Claremont resident won a Grammy. Nadia Shpachenko, won a Grammy for Best Classical Compendium for her latest record, “The Poetry of Places.” Nadia is a Claremont local who has recorded music in the Bridges Auditorium at Pomona College.

Yet the morning leading up to the Grammys was also a sad day for many following the shocking death of former NBA and Lakers star Kobe Bryant and eight others in a helicopter crash. Since the Grammys were held at Kobe’s home court, the Staples Center, the night was filled with sorrow as people mourned the late star and performed in his honor.

“I was following the news on Kobe Bryant’s death instead of watching the Grammys and then, later on, I was on social media and saw the results of the Grammys,” said Melissa Mani, Library Assistant. “To be honest I didn’t know some of the people who won. I was really surprised by how many Grammys Billie Eilish got, she is an amazing singer and is just impressive. It’s a lot of new artists who won.”

Some highlighted performances of the night include one from Alicia Keys, the host, who put on various parody song performances. She sang “Someone You Loved (Parody)” in honor of Kobe Bryant and the connection music has to everyone.

“The opening Alicia Keys did was amazing, because it showed how amazing of an artist she is and how she can think on her feet,” said Ms. Mani. “She was able to honor people and sing about events that had happened earlier the day.”

Another performance that got the audience out of their seats was the diverse collaboration between Lil Nas X, Billy Ray Cyrus, BTS, Diplo, Mason Ramsey, and Young Thug. In the performance, the group performed Nas’s hit singles “Old Town Road” and “Rodeo,” and transformed the elegant Grammy stage into a movie scene straight out of the midwest. BTS’s performance also creates a new chapter in history, as BTS becomes the first-ever Korean band to perform on the Grammy stage.

While the performance by Lil Nas X was liked by many, not everyone shared the view that it was a fun and good performance.

“The one performance with Lil Nas X was not great,” said Kush Arya (’20). “He had the yodeling kid perform. It’s just, he and that meme kid are not cool anymore.”

The Grammy awards kicked off 2020 right for the music industry. The night was packed with outstanding performances from the fresh rendition of Lil Nas X’s “Old Town Road,” to history made by Billie Eilish’s accomplishments, and the music industry saw a lot of fresh faces in the opening of the new decade. In the future, we can only expect more from these artists, making legendary music and shattering records.