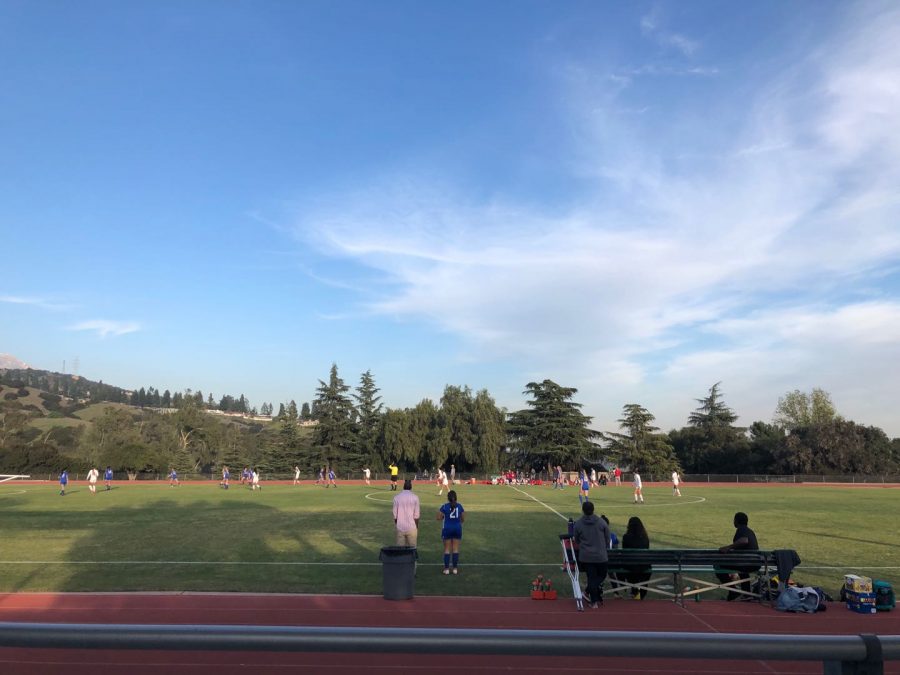 The girls play soccer up on Faculty Field.

Spring season has started. The softball field is no longer empty. Swimmers are conquering the pool, taking the place of water polo players. WSC has claimed the tennis courts. Chandler Field has become a baseball field as the two soccer goals were taken down.

For VWS varsity soccer, however, the goals were still up on Faculty Field because the team continued on to the CIF playoffs. On Thursday, February 13th, the team dominated Upper Field and won the neutral playoff game against Desert Mirage High School with a score of 6-3. The game was the first playoff for the VWS soccer team, and the next game was held on Saturday, February 15, against Gabrielino High School.

The game on Thursday started off tough, but the varsity girls were able to fight hard until the end and snatch a win for their team. They finished the first half with 2-1 and expanded the win by 4-2 in the second, ending with an overall score of 6-3.

“It was tough in the beginning but then we scored a lot,” said Abbey Cook (‘23). “I was kind of scared in the beginning of the second half because it was super tight. It was mostly Taren [Duffy (‘22)] [who scored] this game. We scored three, and I had one, but assists are as good as goals, and it’s good to have multiple people on the team who can score.”

“The game was great,” said Malick Mbengue, head coach of the VWS varsity soccer team. “The first half and the beginning was kind of back and forth in terms of momentum, but we were able to break through and score more goals. It was a good start to the CIF playoffs.”

As the girls reflected on their performances after the game, they were determined to improve and do better in specific aspects in future games.

“We performed well,” said Bridgette Lee (‘20), co-captain of the VWS varsity soccer team. “But it definitely exposed something that we need to work on in the next game… We need to work on defense and discipline, but overall we played really well and won the ball well, which was our biggest goal. In this game, we had a hard time getting disciplined with people who would take space, and we wouldn’t shut it down quick enough, which was how they got their two goals.”

“I definitely think that we could improve more on communication and being there for each other and really just not letting in goals that were not necessary,” said Paige.

Understanding that the opponent in the next game will be just as strong, the team is ready to face another challenge.

“We are playing the number one seed [on Saturday]…” said Abbey. “I really want to win, although it will be a lot tougher.”

“The next game is going to be tough, so we have to play our best if we want to win,” said Mr. Mbengue. “But I think it is part of the challenge.”

The season has stretched its way to CIF playoffs, and the elimination games are challenging and cruel for the teams that lose.

Despite the loss on Saturday, a bright future awaits the VWS varsity soccer team. With the new players who joined this year, the team will have a lot to grow before finally becoming undefeatable.

“We have such a young team,” said Mr. Mbengue. “Even if the season ends early, we still have a lot of hope and a lot to be excited about in the next few years.”

The VWS varsity soccer team, a team of youth, strength, vitality, and great potential, would decide whether the two soccer goalposts will stay on Faculty Field any longer on Saturday. Even if the two goalposts come down on Saturday, the team’s passion and love for soccer will always stand strong.