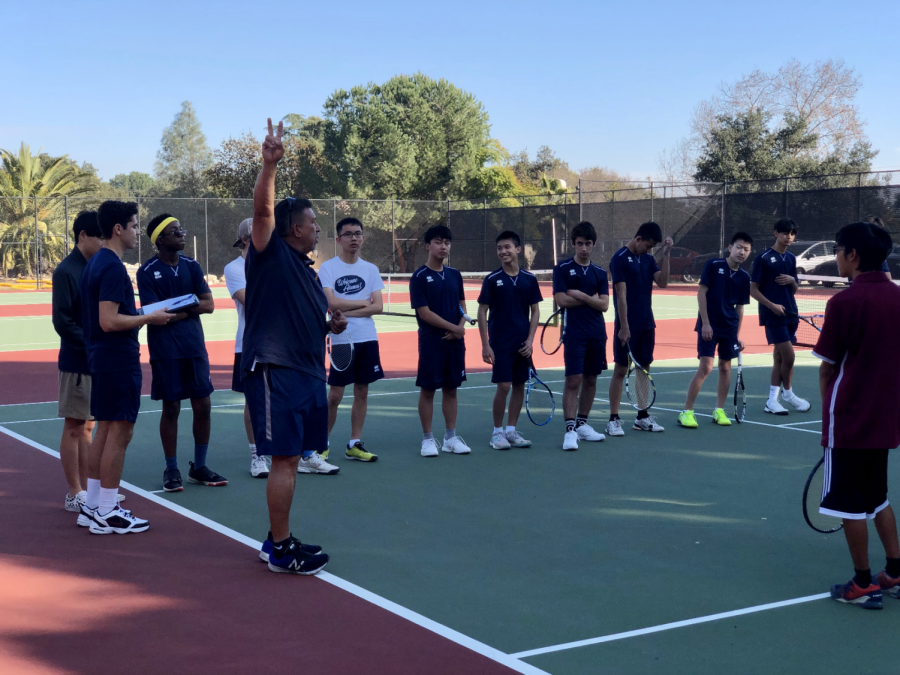 Coach Ron Martinez points out the nearest restrooms to the away team during introductions.

On a tranquil, clear-skied February afternoon, WSC varsity tennis launched their pre-season play with a practice home match against West Covina High School. The team welcomed three new freshmen for this 2020 season, along with one returning Webb athlete transitioning in from JV.

“We did lose some quality players, but it’s exciting for me to have some young bodies coming up this young, ready to play,” Coach Ron Martinez said.

“I’ve played tennis for around four years, but I feel a little bit nervous because this is my first high school game in any sport,” said doubles player Nathan Liu (‘23) before the match. “I’m most excited to try my best to win games and play tennis with my friends.”

During pre-game introductions, Coach Martinez established deuce plus one scoring, instructed players to call for a line judge if needed, and encouraged everyone to take more risks in preparation for their league play.

After Coach Martinez’s welcoming remarks, co-captains Harrison Lee (‘20) and Garrett Revelli (‘20) led the reading of the lineup, the pre-game pep talk, and the iconic WSC “WEBB!” tennis team cheer. Doubles players trekked up the hill to upper and pool courts, while singles players remained by the Day Student Parking Lot at the lower courts. The games had begun.

As for Coach Martinez’s lineup strategy, he allowed both team captains to sit out as subs to give new younger varsity players an opportunity to develop their skills before league play.

The WSC team also includes three current and prior members of the VWS varsity tennis squad who have stepped into the roles of team managers.

“This is my first season managing for the boys and I’m really excited to see their growth over the next couple of months,” said Laura Li (‘22), a new WSC varsity tennis manager and VWS varsity tennis player. “I think I’ll learn a lot from both watching their games and doing behind-the-scenes work to help the players succeed.”

West Covina’s #1 singles player dominated the lower courts with an overall individual game tally of 18-1, but the Gauls were able to make up many of their points in doubles to rebalance the scoreboard.

After the competition, Coach Martinez declared returning seniors and doubles veterans J.D. O’Donnell (‘20) and Jeffrey Zhong (‘20) MaxPreps Co-Players of the Match for “rushing the net, volleying for winners and granted they did not win all their matches, they played hard.”

“It’s crazy that I’ve reached the last first match of my high school career,” said Jeffrey. “This is an emotional and nostalgic experience for me because tennis is most definitely my favorite sport. I’ve played for six years, and I like hitting the ball with my friends because it’s satisfying and stress-relieving.”

Ultimately, the Gauls lost to West Covina with a tight final score of 8-10. Although they fell short in their first match of non-league play, the team is excited to travel to Polytechnic School in Pasadena for another friendly practice match this Friday.