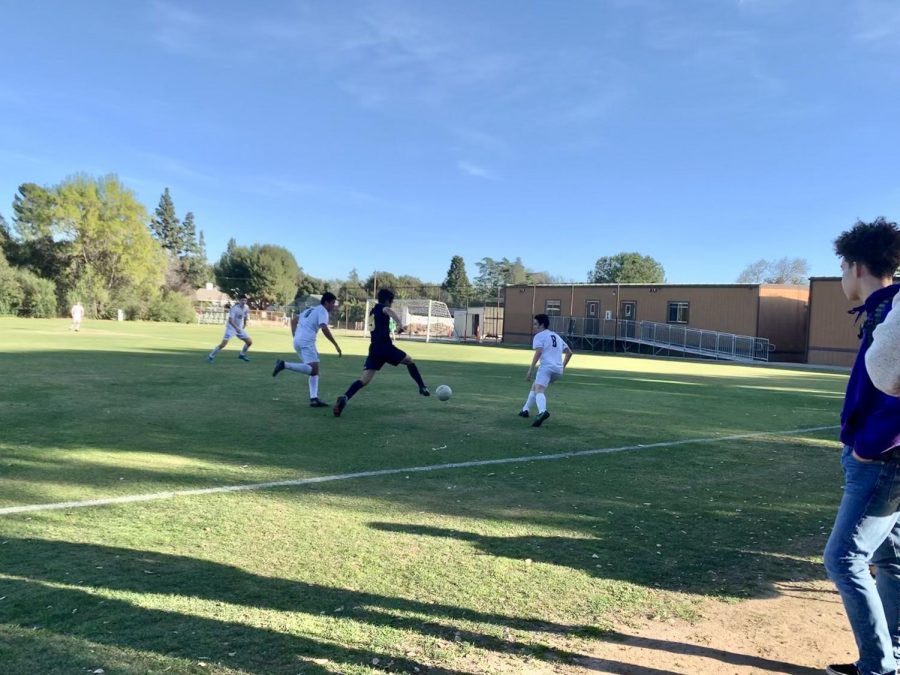 It was a crisp, sunny afternoon on January 31st, 2020 when the WSC varsity soccer team celebrated their senior game. Walking onto the field, the boys knew that their final home game was going to be difficult. Last year, Sage Hill High School and Webb tied with a score of 0 – 0. This year, they could either win or tie in order to secure a spot in the playoffs.

As soon as the game started, the team already had a full crowd cheering them on.

“It was an awesome game, and it felt cool to have so much school spirit all around us,” said Catherine Lou (‘21), who was watching from the bleachers.

A quarter of the way into the game, the score was still 0-0. The boys had tried to make several goals, but Sage Hill’s goalie was able to block every single one of them. It was clear that the players were starting to get annoyed.

“This season was really fun because I got to hang out with all my friends. Our final game was difficult, but it finished well,” said Liam Gerken (‘20), who has scored 13 goals this season and serves as a co-captain.

However, the game started to seriously pick up in the second half. To start, Daniel Hu (‘23) made a goal, pushing the score to 1- 0 to Webb. Elated, the boys all huddled together to celebrate their close success. Right before the end of the game, Sage Hill found an opening to make a goal. Luckily, goalie Xander Kong (‘22) blocked it, and the crowd roared as the class of 2020 celebrated a final victory on their home turf.

“I was really proud of the team this season. We played hard but I’m sad we won’t be able to play again together as a team,” said Frank Hu (‘20), co-captain of the team.

Many of the seniors have been playing for all four years, so this game had an especially sentimental value to it. They will leave behind an unforgettable legacy at Webb that future teams can aspire to fill.