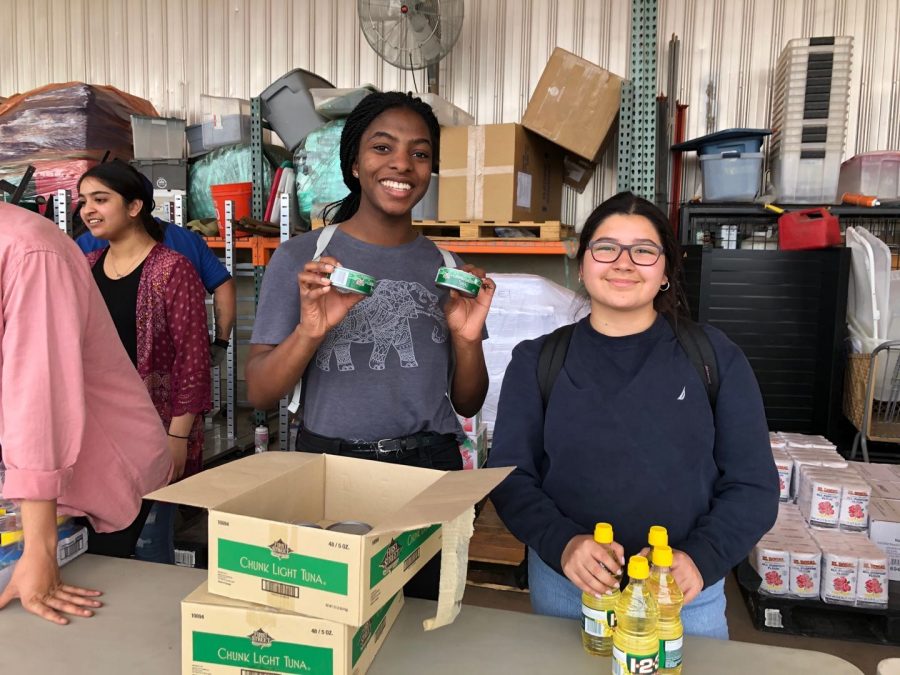 Nnenna Ochuru (‘21) and Rebeca Castro (‘20) hold food supplies and get ready to serve.

Have you ever looked at pictures of the homeless, watched a documentary about the voiceless, or even witnessed injustice yourself but do not know how to react or change the status quo? Have you ever asked yourself the question: what is something I could do to help, and are my actions really going to make a difference?

Even small actions make a significant difference. Service and giving back to the community are important values at Webb, and as part of the mission statement, students are encouraged to “serve with a generous spirit.” Actions like volunteering in Claremont, cleaning Webb Canyon Road, and even spending every afternoon doing community service as an afternoon activity are honorable actions that impact the community, the state, and even the world.

From outrage to courage

Led by Jessica Fisher, co-chair of the humanities department, and John Choi, science department faculty, students who participated in the Journey and Immigration and Asylum Unbounded course spent a majority of their time volunteering and doing what they could to give back to the community. On the second day of the course, the team traveled to the Galilee Center, a nonprofit that provides local migrant farm workers and asylum seekers with free food and lodging. With them, the group brought dozens of bags of clothes and hygiene products collected from the Webb community.

“I’ve learned a lot about the very real and inhumane conditions in detention centers, not just separating families, but how people are treated in a way that would be totally unacceptable for an American citizen,” Ms. Fisher said.

“I think I now understand that babies riding in a bus for three and a half hours that’s 117 degrees with no water, or people only being fed bread for three days and are shoved through the bars of cages, receiving showers in detention that’s only cold water being sprayed on them…and being rejected for an asylum hearing because their documents aren’t translated into English because they had no access to a translator.” said Ms. Fisher. “I’ve known about some of these in a hit or miss fashion, but I haven’t understood how widespread and systematic they really are.”

Many students did not fully understand the hardships of the immigrant journey and that the process of seeking refuge continues after getting out of detention centers. Students find value in volunteering, visiting the Pomona Day Labor Center, and talking to previous asylum seekers who still struggle with fear and depression.

After speaking with those who have been granted asylum, we began to understand the reality of the situation. Many were held in federal detention facilities for months at a time. We were shocked to realize that even after reading headlines and following news stories, the conditions these people are subjected to are so much worse than we could ever imagine.

When confronting the cruel reality of the immigration and asylum-seeking journey, students were able to use service as a tool to make a difference, no matter how small. It is reassuring to know that there is something that we, young people who cannot vote, can do to make a difference.

Why service makes a difference

The mission of the Galilee Center aligns with people who have a goal to help those in need and do what they can to make a difference. According to its website, “the mission of Galilee Center is to fulfill the needs of the underprivileged and disadvantaged by providing food, clothing and other basic needs and to affirm their dignity with love, compassion and respect.”

“I have been working [at the Galilee Center] since 2010,” said Gloria Gomez, one of the founders of the Galilee Center. “I believe in what we do because it’s important to feed the hungry and accept everyone regardless of who they are and where they come from.”

As a nonprofit organization, funds and donations become especially important. They go directly to the center’s thrift shop and the food banks held at the shelter every Thursday.

The Galilee Center, with its program “successfully operating for more than 8 years,” has become an indispensable component of the local community. The food basket distribution gives food to families in need weekly, and the biggest program has provided “over 350,000 meals annually to local families, as well as many other services.” The center not only provides local farm workers and asylum seekers with food and shelter, but also becomes a gathering place for the community.

“We get [to the Galilee Center] from our houses 10 minutes away,” said one local farm worker.  “For a typical day, we go to work and come here. We learned about the Galilee center from family friends, other workers and people from the field. We know pretty much everyone at the Center, and it has become a community for us. It is easy to make friends here.”

“There are a lot of single mothers who come here with their kids and other young people in general,” said another farm worker. “Local businesses donate a lot of things for the center to give out to us.”

“I come here every Thursday to help out because sometimes they are short on people,” said Ted, a volunteer at the center.  “I learned about volunteer work from some friends. I came here because I want to do something for others and help other people. It’s a simple thing but it makes a lot of difference. I bring my own candy to give out to the kids. I believe in what we are doing. I don’t know if anyone is going to help me, but I want to help others anyway.”

Helping sounds difficult, but it is simple gestures like supporting nonprofit organizations online, spreading the word, raising awareness, and giving out clothes that do not fit to those who need them, that help migrants with their journey indirectly. It is important that everyone knows that there are small ways to help, even in the face of some of the largest systemic issues facing the country and the world.

“I think a lot of people don’t know about us,” said Gloria. “The ways people can help is to go to our website and donate online. People can also support us on social media like Facebook.”

What we can do

As Webb students, we aim to “serve with a generous spirit” and “lead with distinction.” We advocate for less titles and more true leaders, and we are reminded that good leaders lead with a compassionate heart and serve the community.

“I think that regardless of who we are,” said Gloria, “people should respect every human being and embrace their compassion and kindness.”

Gloria is right, and some of the easiest ways of showing kindness and compassion to some of the most disenfranchised people in the country is by giving, not just in dollars, but also in time and material goods.

“Our primary goal was to help develop empathy, and I think we’ve definitely achieved that…” said Ms. Fisher, “We want to feel empowered, not powerless in the face of a really dire situations, and I think we’ve been exploring some small but useful ways to help people’s lives, even if that means having a person to person conversation, showing respect by learning about someone’s experience, story, culture, or helping them carry their bag to their car, and handing out food in a way that’s as respectful as possible, and helpful, and just being interested in what they’ve gone through.”

Before taking political action and finding out how to lobby, we can make a difference by doing small and meaningful things. For instance, writing letters to deported asylum seekers and purchasing backpacks with useful supplies can give refugees comfort and supplies in need. Service, composed of small actions, has become an empowering word. If more and more people join the troops of combating injustices through service, small droplets will develop into a big wave, and we can change the world, even as teenagers.