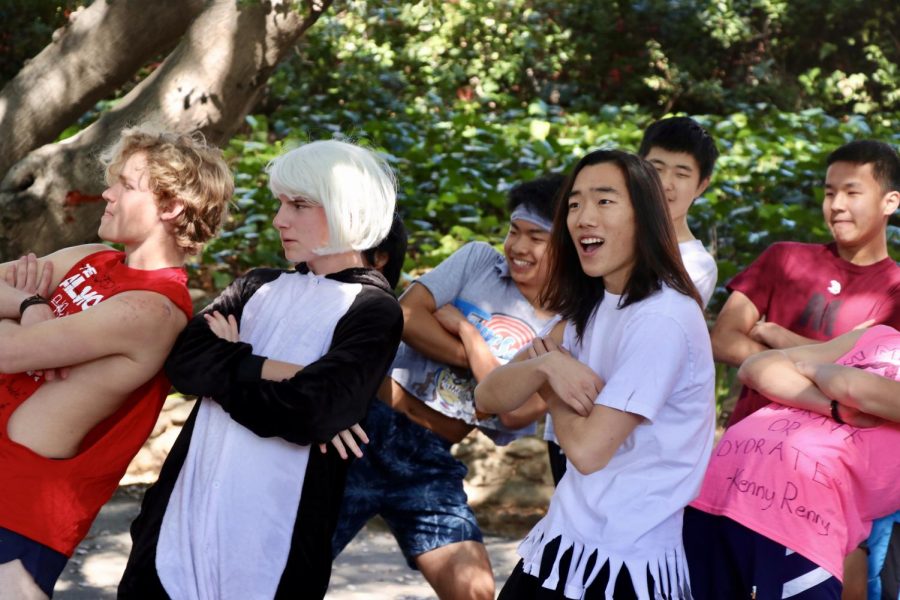 Together as a community, the WSC boarders put on a once in a lifetime dance performance. Featuring *NSYNC music, silly wigs, and excited freshmen, the show provided an opportunity for Webbies to feel happy and come together — before being forced to leave the Webb campus.

Webb Idol was held during a long lunch on Monday, February 24th, before Webbies departed for Unbounded Days. After days of practicing and coordination, the performances came together at Crossroads with an audience of teachers and students alike. Melissa Mani, Library Assistant, Michael Szanyi, humanities department faculty, and John Choi, science department faculty, judged the competition.

“I loved Webb Idol,” said Alfonso Alvarez-Seara (’23). “Spending time to learn a dance that our choreographers Maria [Lykhtar (’22)] and Sharon [Xu (’22)] taught us was very fun and rewarding. I got to see everyone in my dorm working together which was cool.”

The beloved Webb tradition is an annual dance competition between the dorm residents in the WSC boarding community, and for the first time in a while, the WSC day students.

The day student group opened the competition. While the team pulled off an entertaining routine, the group of day students faced challenges such as getting participation and scheduling practice times.

“This year it was a good opportunity to get and compete, but it was a lot of hard work on us,” said day student Jay Akpengbe (’22). “Overall, I was proud of the work we did in the end. I do not know if I will participate next year though, it was a challenge.”

The freshman dorms followed in the competition. Holt and McCleod borders received laughter and smiles from the audience. The judges expressed gratitude for their confidence and the overall large number of participants.

“They all did an amazing job, honestly,” said Ms. Mani. “I feel like a lot of them I could tell they had practice, and they really wanted to bring their best moves out.”

Next up were Kirkhill and Reynolds. Their dancers took risks and excited the audience. Mr. Choi even gave them a “4.0 on the standards based grading system,” which received lots of chuckles from the audience. Leo Cheng (‘21) also received a shout out from judges for appearing both excited and bored at the same time.

“To be honest, I was skeptical at first of participating since the past years have been less fun,” said Leo. “This year was better organized. The prefects such as Roger [Yen (‘21)]  really increased spirit and crossroads was a much better place to hold the event.”

Following freshman dorms, Jameson competed. Their routine was original and a little “risqué” as Mr. Szanyi put it.  Ms. Mani described their performance as a “hyped up gym class I wanted to be a part of.”

Audience members loved watching the performances and seeing the dedication the community put into the show.

“So many individuals put so much hard work into this event,” said Kennedy Becher (‘21). “It is really important how it brings the community together. Everyone comes down here to watch and support their friends.”

The 2019 champions, Alamo dorm competed last. Their performance took the audience on a tour through different decades of music, dancing, and fashion. Not only did they dance, Jimmy Feng (‘21) played the violin, Logan Causley (‘22) sang, and Mert Albeyoglu (‘21) held the Alamo flag.

In the end, the boys of Jameson dorm took home the first-place win.

“It feels great to win,” said Max Fargo (‘21). “We put hard work in, we pushed through and grinded together and it paid off in the end.

The other dorms still enjoyed themselves and exhibited good sportsmanship.

“I am sad we lost, but I will try again next year,” said Cliff.

For now, the Webb Idol crown goes to Jameson until WSC students once again go head to head next year.