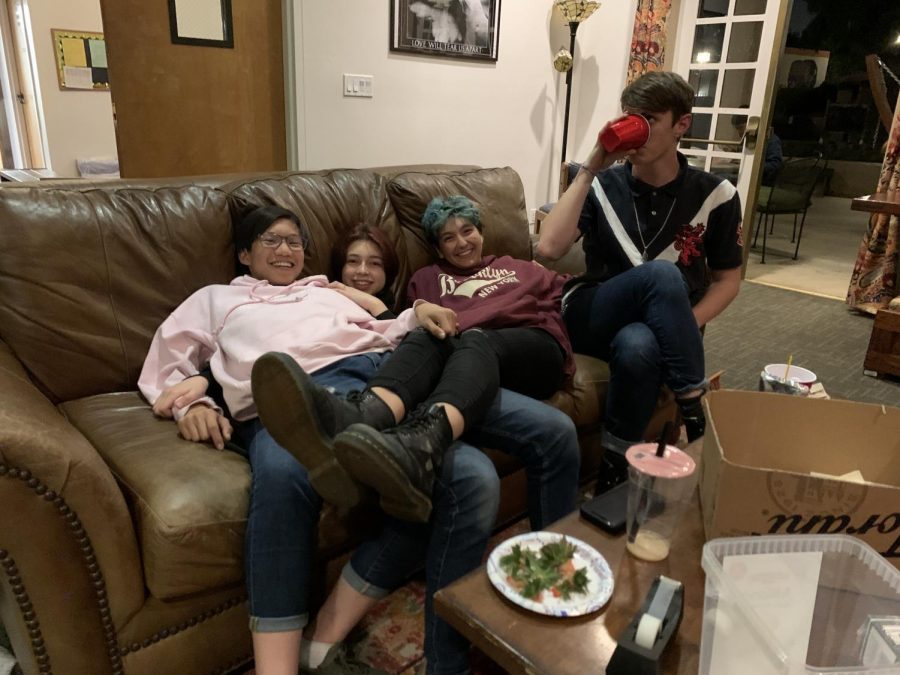 The weekend before Webb shut down for safety precautions against the coronavirus, the entire campus prepared to complete and celebrate the end of the third quarter. Everyone was busy as Webbies struggled to patch up the last few paragraphs to an essay, or cram for an upcoming unit test.

To help Webbies destress on the weekends, many people in the community put on fun activities for students to attend, such as open dorms, that give the community a welcome space to escape their piles of work for just a few hours.

On the night of Friday, March 6th, the Hutches hosted their second official open dorms of the year and provided all Webb students who were on campus a much-needed environment to relax, eat food, and chat with friends.

Since the dorms at Webb are divided by gender, open dorms is a time when the dorms open their doors to members of either school. Students can go into each other’s rooms, hang out in the common area, and eat specially prepared food and snacks.

This tradition of the open dorms is a great time for VWS and WSC boarding and day students to hang out collectively in the dorms.

“I love open dorms,” said Angie Chen (’20), a senior resident of North Hutch. “It’s a time where I can hang out with my friends from WSC in the dorms, and I especially love the homey atmosphere that open dorms brings when all my friends from both schools are gathered together in one room.”

Since food is essential to the open dorms experience, there was a wide array of food that the dorm prefects prepared.  Served in the Hutches that night was an assortment of cheese and meat, popcorn, chips, guac, salsa, fruits, crackers, sodas, and of course, the all-time favorite: chocolate strawberries.

“We made chocolate-covered strawberries,” said Carol Kang (’21), a South Hutch prefect. “It was fun to make and didn’t take a long time.”

“As a dorm prefect, I think it’s important to eat good food,” said Cecilia Li (’20). “For some reason, the two Hutches decided to both go for fruits and healthy snacks. There’s a lot of really healthy food such as strawberries, grapes, and pineapples. I love fruits, so I’m happy.”

“The turnout wasn’t as big as the last few [Hutches open dorms],” said Stephanie Baron, Director of the Health Center and South Hutch Dorm Head. “I’m not sure if it is just the timing of things. I thought we had a good spread of snacks and stuff. We did chocolate covered strawberries which was something that we did last year [for open dorms] that did really well, so we prepared for that kind of crowd again, but so we had a lot of leftovers. But we did have a crew that stayed the whole time, and they just hung out. It wasn’t a large number; they just chatted, and played games. We even had to ask them to leave cause they stayed that late. People had fun for sure, whenever there is food, it always brings people together.”

One of the reasons that fewer people came than expected is because of the many Friday night sports games that were happening at the same time.

“We actually had a lot of sporting events off-campus and games that ended late that were home,” said Stephanie Baron. “So we would have the rushes as they would come back, like when badminton came back, swimming came back, and they would leave, clean up and get rested. But in general, I love the idea of open dorms. Obviously, there aren’t many coed spaces on campus that people can gather since hooper is offline, so different opportunities across the year for students to hang out in coed space.”

Because less people showed up than expected, open dorms in the Hutches were quieter than usual and did not have the crowds that most open dorms have, as most people are either off-campus or in their rooms, ready to unwind for the weekend.

“The energy level was really low,” said Angie.”While there were quite a few WSC members who showed up, the overall environment was really quiet. I think people were just quietly chilling in the dorms, or in the lounge, and hanging out with friends. Once in awhile I can hear people laughing and having a good time.”

Nonetheless, both of the lounges in South and North Hutch were bustling with energy as students lounged around on the sofa, ate food, drank boba and laughed with friends and faculty.

“I think everyone had a lot of fun in the North Hutch Lounge talking and eating food,” said Cecilia.

The Hutches open dorm was definitely a quiet place for students to spend the night, as those who came had a great time cherishing the short moments of bliss in high school. With a quarter of the school year remaining, going to fun events such as the Hutches open dorm is a great way to spend more time with friends before disembarking on the long summer break ahead.